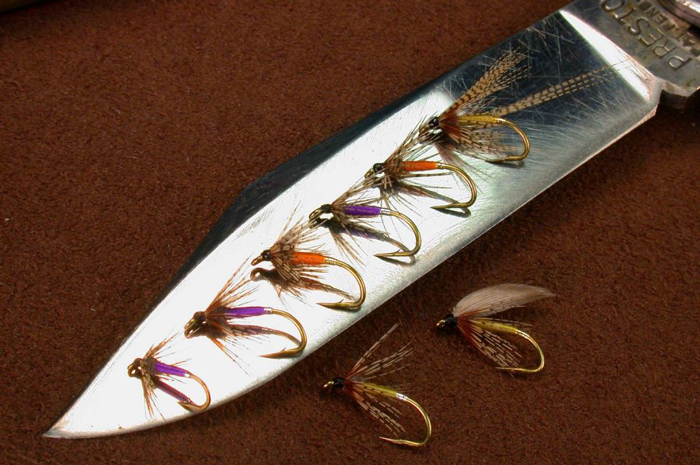 Soft Hackles come in a wide variety of colors and materials.
All photos courtesy Montana Angler

There are few things in fly fishing that are more satisfying than tying flies that adhere to the adage “less is more.” Soft Hackle flies are a perfect example of flies that play off simplicity, clean lines, and perfect proportions. They’re also very fun and effective flies that work both on the dead-drift and swung under tension. Some of our Southwest Montana rivers offer fantastic stretches for Soft Hackle fishing, as they have prolific insect hatches and water that lends itself to swinging flies. 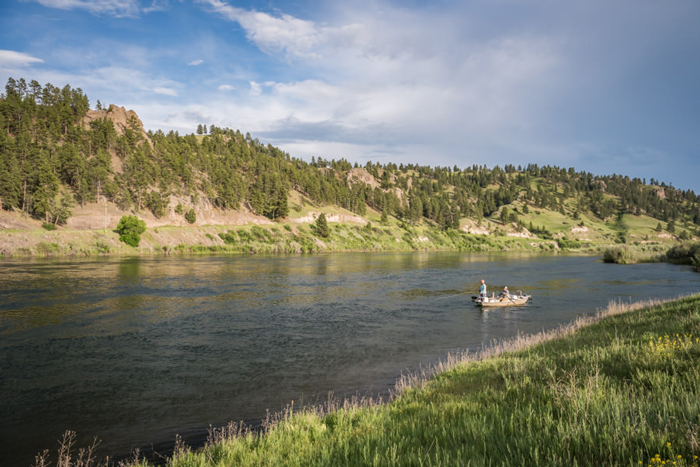 The Soft Hackle is a very straightforward fly style more than it is a specific fly pattern. Soft Hackles are typically tied with webbier, softer feathers, as opposed to the stiff-fibered feathers that are used for dry flies. The fibers of the softer feather will soak up water more than the stiff dry fly feathers and will flow and pulsate more when the fly is swung through the current. This soft, absorbent hackle also encourages the fly to swing a little bit under the surface film, rather than skating along on top of the film. The hackle feathers for Soft Hackle tying are commonly taken from the India hen, grouse, Hungarian partridge, or starling. All are affordable options and offer slightly different colors and patterns. 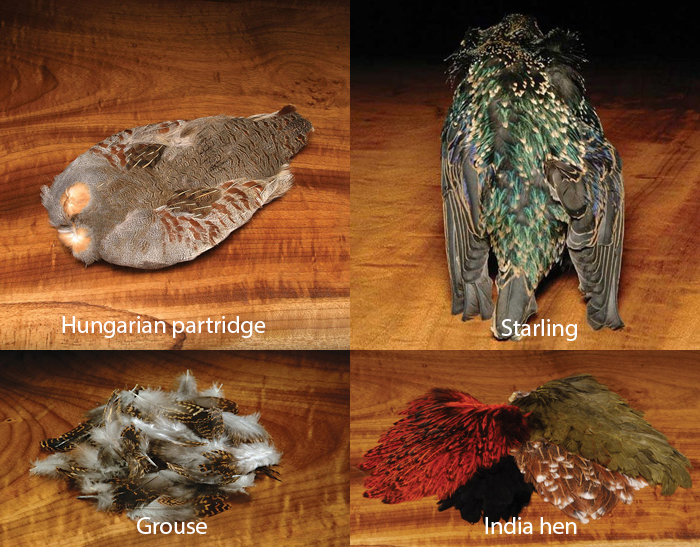 Naming Soft Hackles tends to be more a description of the fly itself rather than what it may be imitating, if it imitates anything at all. A couple of the most common and historical soft hackles are simply called the Grouse and Orange and the Partridge and Olive. These straightforward names simply describe the fly’s color and the hackle that it’s tied with. A personal favorite is the Pearl Soft Hackle, which is simply a pearl flashy body, a bit of dubbing, a bead, and–big surprise–a soft hackle.

Soft Hackles can definitely be tied and fished to imitate emerging insects, such as caddisflies and mayflies; however their usage extends far beyond “matching the hatch.” In much the same way streamers will elicit curiosity or aggression strikes, Soft Hackles will also hook fish when there is no apparent hatch going on. Traditionally, Soft Hackles aren’t weighted, as they’re more or less intended to be fished right under the surface film. However, some very effective and more modern Soft Hackles do incorporate brass or even tungsten beads in their design. A small bead or just a little bit of flash may add to a Soft Hackle’s effectiveness if it’s tied for those times in between hatches when a little sparkle may get more attention from the fish.

As most of our Montana trout aren’t super picky, I tend to tie my Soft Hackles a little larger than some. I will tie some as large as size 6, although mine are generally sizes 10 through 14, which is a fun and easy size to tie. On some rivers, effective Soft Hackles may be diminutive sizes 14 through 18, depending on what size of insects the fish typically eat.

Master fly tier Charlie Craven illustrates an excellent method for tying soft hackles on his website. (The step-by-step can be seen here.) His ultra-clean tying and simple three- or four-material fly in the demonstration are exactly what make tying and fishing Soft Hackles so fun. “Less is more” is a perfect way to describe the fly in Charlie’s post, and the simple tying technique demonstrated can be altered in dozens of ways to make for your own unique flies. 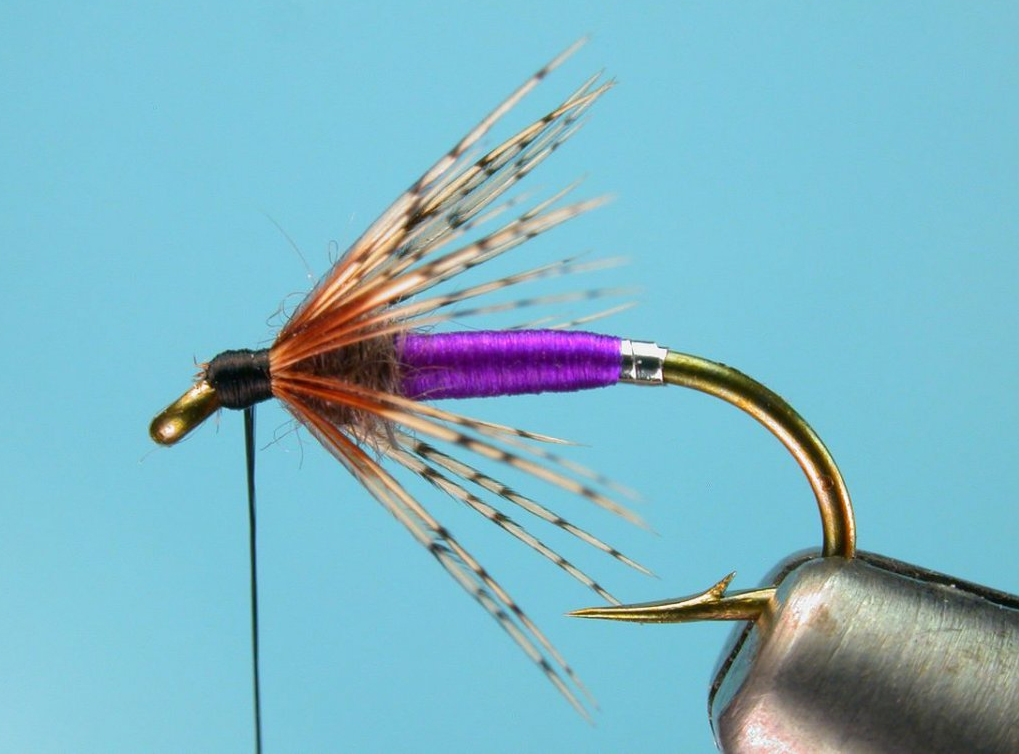 Soft Hackles can be fished a few different ways, whether it’s cast upstream and dead drifted under a strike indicator or swung under tension in more of a down-and-across swing. Another popular and effective method for fishing Soft Hackles is the “drift and lift,” a technique that combines the upstream cast and drift, with a bit of a swing and lift under tension at the end of the presentation. Personally, I opt to swing Soft Hackles on light Spey rods. It’s fun to cast and step down some likely holding water, waiting on the exciting grab while the fly is swung under tension. The added reach gained by fishing longer Spey and switch rods also allows the angler to have more room to mend the line and control the fly’s swing. 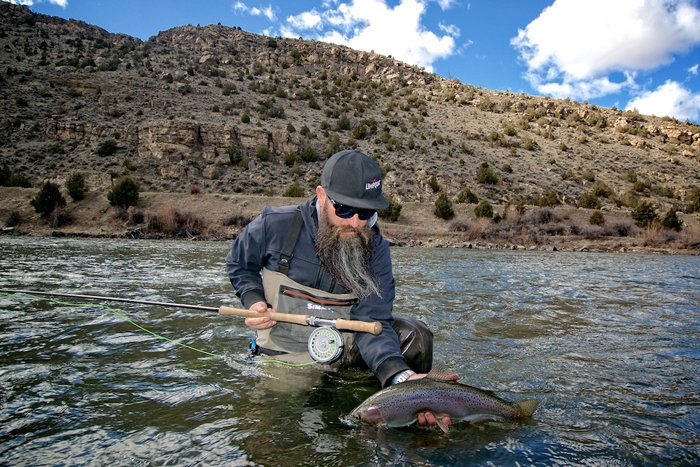 The author fooled this nice rainbow with a small, sparse Soft Hackle swung on a Spey rod.

A couple of our favorite Montana rivers for fishing Soft Hackles are the Madison and Missouri. These two fisheries lend themselves to swinging Soft Hackles because they’ve got such large insect populations with consistent, large hatches, and the character of the rivers lend themselves to the fishing techniques more closely associated with fishing soft hackles.The riffles and runs in these rivers make for great holding water in which to swing soft hackles. Both rivers have wide sweeping runs and long riffles that hold fish and provide great habitat for insects. 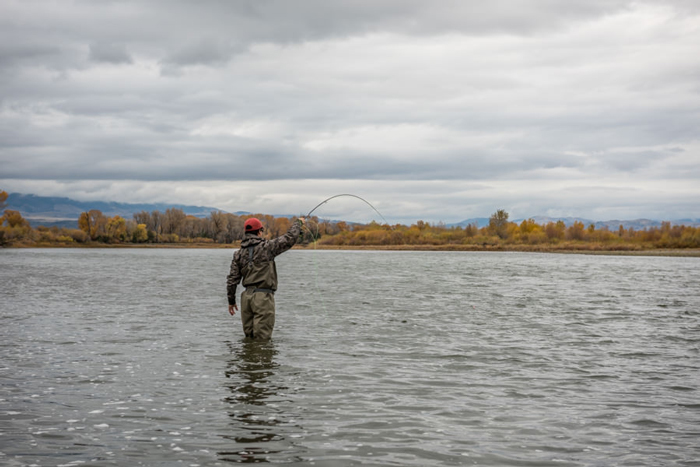 An angler hooked up in some great looking Soft Hackle water!

Andrew Grillos works at Montana Angler, in Bozeman, Montana, and he’s a signature tier for Umpqua. Check out his personal website for more info.