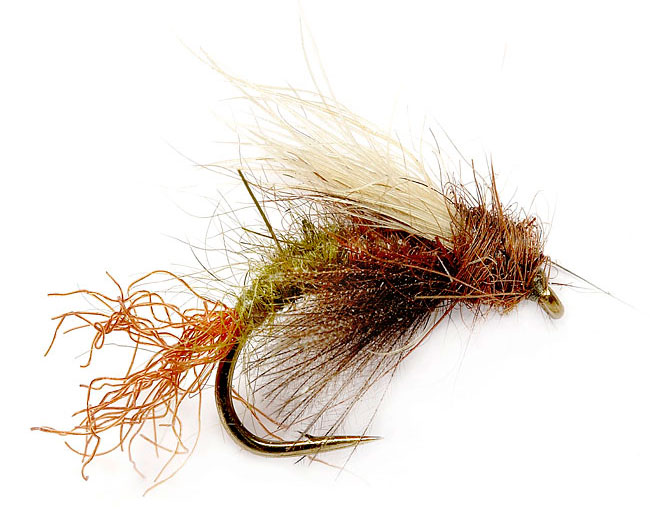 Editor’s Note: Almost 20 years ago, when I was a guide in Yellowstone National Park, I fell in love with the Rabbit’s Foot Emerger. Fished as a dropper behind a PMD Sparkle Dun on the Lamar River in August, this fly was simply deadly on big cutthroats. That fall, I took the pattern to the Rapid River in northwestern Maine, where the landlocked salmon couldn’t resist it, either. Ever since, I’ve had plenty of Rabbit’s Foot Emergers in my fly boxes.

Some patterns just have it—that ability to imitate no particular insect or food, yet somehow imitate most all of them and attract the wiliest of trout that have thus far snubbed all other offers. Think the Parachute Adams. The Woolly Bugger. The Pheasant Tail. The go-to fly. The rabbit’s foot that increases your luck. This is Rosenbauer’s Rabbit’s Foot Emerger, a fly you simply do not want to be without on the river, especially during a hatch of Hendricksons (or Baetis, or PMDs… you get the picture).

We got together with Tom Rosenbauer to ask him about this proven pattern.

ORVIS NEWS: Why do these flies work so well?

TOM ROSENBAUER: Honestly, I don’t know why, exactly. I can surmise though. And I can say, without a doubt, I’ve fooled more trout during more and different hatches—and while prospecting—on this fly than just about any I’ve ever fished. Many times, trout take this pattern when they won’t take much else, or anything else.

ON: What do you surmise about the Rabbit’s Foot Emerger’s success?

TR: The hare’s-foot fur has a lot to do with it. I was inspired by Bill Phillips’s Usual and some of Galen Mercer’s emergers. (Editor’s note: Bill Phillips named The Usual, which was, in fact, tied Fran Betters.) It was the first fly that used hare’s foot. I love the buoyancy of the material. It keeps the top half floating while the rest is submerged subsurface, which looks so natural. Plus, that “bugginess,” that slightly unkempt look. Trout seem to really love it.

TR: I think it’s the sum of the parts. The materials are basic. But as a whole, they add up to something special. The curved nymph hook gives it that great classic emerger profile. It half floats and sits low, the body sits just subsurface. Trout prefer emergers naturally over duns because they’re more vulnerable. They take less energy to consume. And then there’s the Antron shuck that gives the look of a fly that’s just sprouted its wings and is sort of riding its shuck like a raft and is very susceptible. The CDC adds movement and traps air bubbles.

ON: What’s the pattern supposed to imitate?

TR: Originally, a Hendrickson. But now I use it for March Browns, Eastern and Western Green Drakes, BWOs, PMDs. That’s another thing that’s so great. It covers so many hatches. Tied smaller or larger, in different colors, it’s one of those great Hendrickson patterns that you can use in almost any situation when you need some luck. Originally, I spent the length of a Hendrickson season studying the hatch and the big brown trout’s reaction to it. I played with the pattern that whole season.

I’ve “invented” hundreds of patterns. Maybe ten I still fish that really work. Most of them looked a heck of a lot more refined or spectacular than the Rabbit’s Foot, but none get trout to jump on it like this one. This one is my best. Trout just love it. I won’t hit the river without some in my vest. They really are that lucky rabbit’s foot when you need it.

Rabbit’s Foot Emerger
Hook: Sedge hook, sizes 14-20.
Thread: To match the body, 8/0 or 70 denier.
Shuckk: Tan Antron or Z-Lon.
Body: Rabbit fur, color to match the naturals.
Hackle: CDC tied with a distribution wrap around bottom 180
degrees of hook.
Wing: Hair from the toe of a varying hare (snowshoe rabbit). Should
extend back to beginning of tail shuck and should extend 180
degrees around top half of hook for stability.
Head: Rabbit dubbing the color of the mayfly dun you are imitating.
Note: Tom ties them with olive, pink (Hendrickson), tan, cream bodies.
Often he just uses hare’s ear fur for the head instead of bothering
to match the color of the dun.

11 thoughts on “Tom Rosenbauer on His Most Successful Fly Pattern”