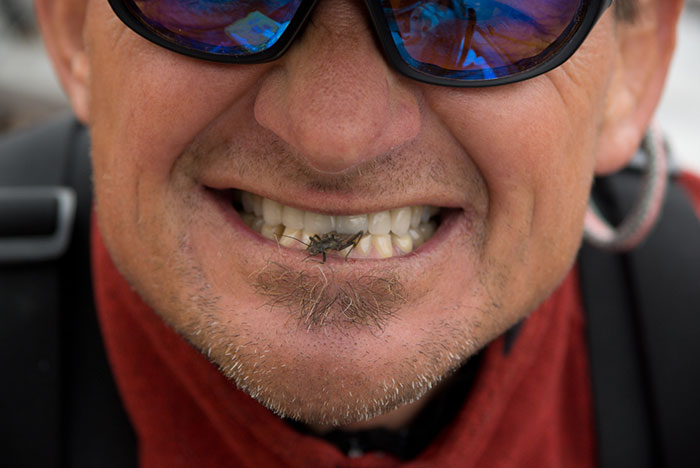 John Herzer of Blackfoot River Outfitters samples a Skwala. He claims they are very tasty.
Photo by Tom Rosenbauer

“Embrace the worm” is what my friend John Herzer of Blackfoot River Outfitters in Missoula always tells me. Every year, when we have our Orvis Guide Rendezvous and Down the Hatch celebration and film festival in April, I always plan on spending a day with John and some of his guides, fishing the Blackfoot, Bitterroot, and Clark Fork rivers in the Missoula area. April is a wonderful time to fish in Montana, and although we’ve been faced with everything from 60-degree days to raging blizzards, the fishing has always been great.

We hope and pray to catch a blue-winged olive mayfly hatch or the Mother’s Day caddis, and maybe expect to see some late Skwala stoneflies drifting down the river. But often it’s a down-and-dirty game with nymphs and streamers, and for pure productivity nothing beats a worm. A worm fly that is.

Some people sneer at worms, as if imitating an aquatic worm is so much less pure than imitating a mayfly. You can’t blame the worms for being born in the wrong order of invertebrates, though, and matching the hatch with a worm, to me, is no less fly fishing than imitating some other critter. There are aquatic species of worms that live their entire lives underwater, living below the waterline along mud and clay banks. But I also think trout eat worm flies because they think they are midge larvae. Most of the midge larvae in our streams are smaller than the worm flies we fish, but the size of your imitation does not seem to be as critical subsurface, and I think the fish see the right shape and color of a midge larva and think, “Boy, that’s a big one! I’m going to eat it”. If fish thought that way, which they don’t. It’s probably more like a reflex, where a trout sees something that looks familiar and tasty and it just eats.

Worm flies are easy to tie and you don’t mind losing a bunch, which is great because you always want to fish worm flies dead drift, on the bottom. Worms don’t swim, and they don’t hatch. It always a pain to add weight to your leader, but because this pattern incorporates a tungsten bead, you often don’t have to add weight to the leader unless the water is very deep or very fast. So tie up a bunch in a few colors (I like pink, red, and tan), swallow your pride, and embrace the worm. 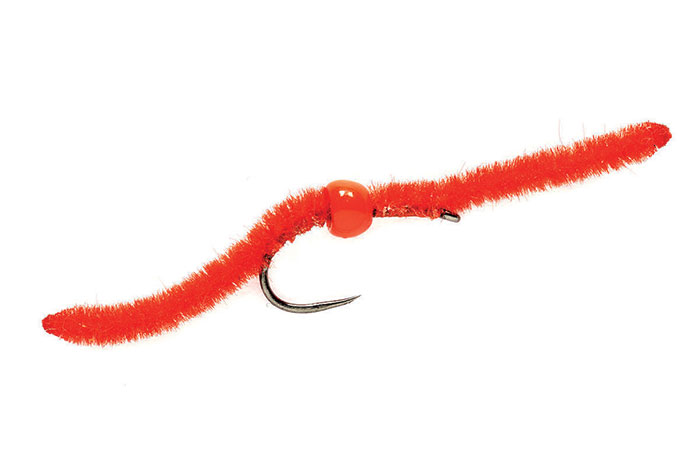 The Tactical Tungsten Belly Worm can be tied in various colors.
Photo via orvis.com