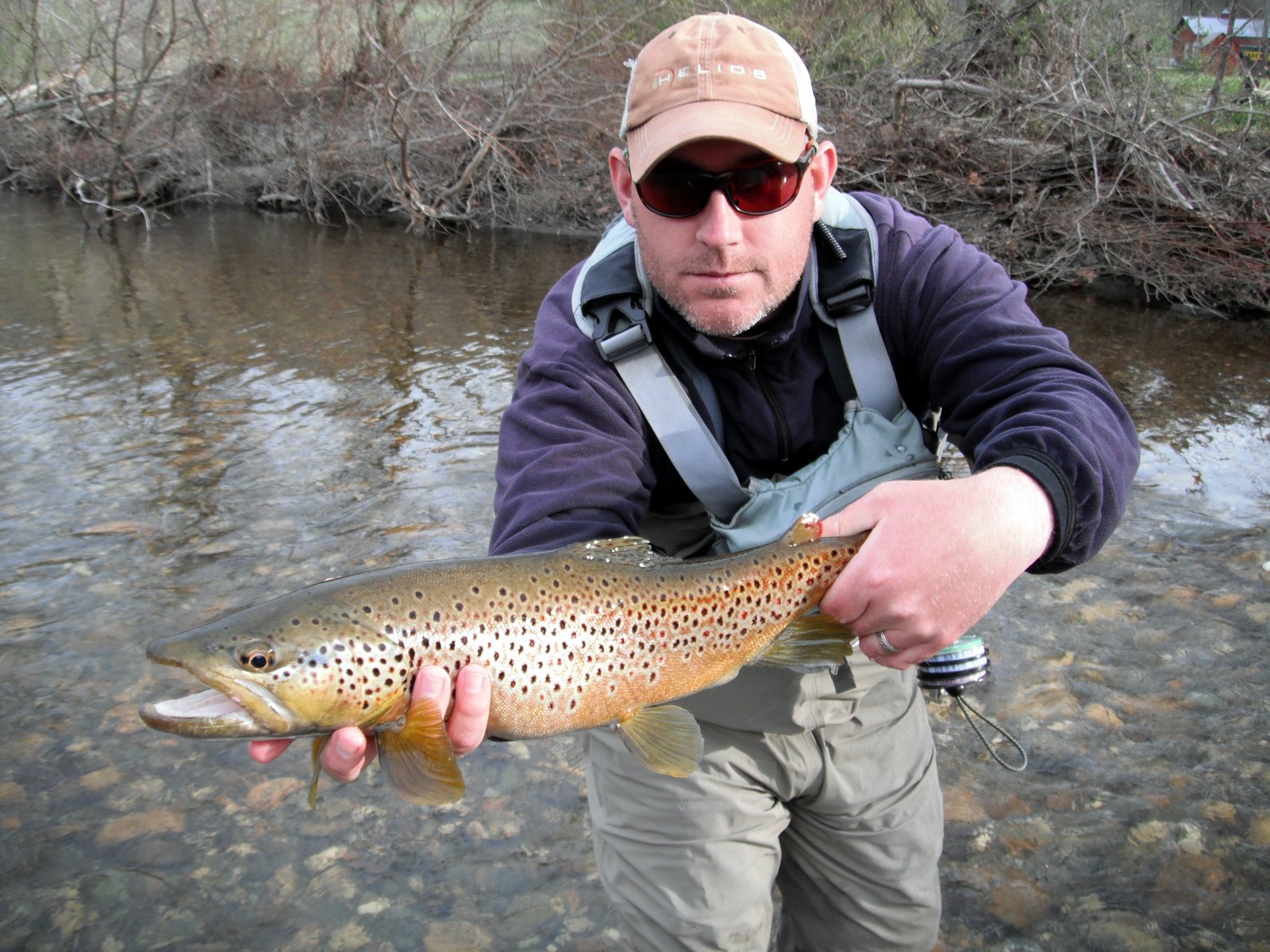 Fall is a great time to catch big browns on the Battenkill.
Photo by Mike Steiner, head guide at Nemacolin Woodlands Resort

There is a period of dry-fly activity on most trout streams every fall that rivals the best hatches of spring. It’s a “fall” (as opposed to a hatch) of migrating winged ants, and when these insects are on the water nearly every trout in the river will feed on the surface with abandon. As autumn approaches, ants hatched in their underground colonies sprout wings. All at once, over a period of a few days, these insects fly off to mate and cross-pollinate with ants from other colonies. For some unknown reason, the dying ants are attracted to water and other shiny surfaces, much like mayfly spinners. There is no predicting this opportunity, but experienced fly fishers can feel it in the air, usually on warm, still, moist, soft September afternoons. I often leave my office for the day, smell the air, and know that when I reach my car the hood will be covered with two or three different types of flying ants. Dinner and any other social obligations will have to wait a few days.

I know it’s hard to compete with the pleasures of raking leaves or installing storm windows, but you should really put aside a day or two for fall trout fishing. To most fly fishers, trout fishing in the fall is much like reading last week’s Sunday Times on Saturday—some interesting stuff, but it’s mostly over. Streams are vacant, except for roving bands of mergansers, and in places where you feel like you had to take a ticket in June you’ll have the water to yourself, with no looking over your shoulder for intruders every few minutes….

But you’ll have to pay a small price for that solitude. Trout won’t come as easily as they do in June. Although weather conditions parallel spring temperatures, most insects have hatched for the season. And biologists studying trout physiology and behavior observe that trout do not feed as heavily or as often in the fall as they do in the spring and summer. As long as summer-like temperatures hold, trout will feed best from dawn till mid-morning, and in the evening. Once the air temperature stays below 50 degrees during the day, best fishing will be from noon till late afternoon.

What and When to Fish
On warm, stable days with light or calm winds, you might see mayfly hatches. Fall mayflies come in several varieties: small olive mayflies, tiny olive mayflies, and ridiculously tiny olive mayflies. That’s an exaggeration, but small olives are by far the most abundant mayflies from September through November. You should not even get within earshot of a trout stream without plenty of olive emergers and dries in sizes 18 through 24. And don’t try to cheat—I know you’ll try to get away with not buying or tying those size 24s, figuring a 22 will be good enough. Don’t count on it. Ask anyone who fishes the Delaware or Housatonic or Missouri in October.

Until the first hard frost, and sometimes even after, grasshoppers and beetles are very important trout foods. In the fall, a beetle is a far better fly for prospecting when no trout are rising than the typical Wulff or Adams or Humpy. Just make sure the beetle is one with a red spot on it, as plain black beetles are nearly impossible to follow on the water. Lacking a beetle, small Elk Hair Caddis or Stimulators can be effective searching patterns, as they look like hoppers or other large terrestrial insects.

Fall rivers, especially this year, can be painfully low, slow, and transparent. Trout have been pounded all year and they won’t tolerate a fly line (or even a leader butt) falling on their heads. You won’t have much luck with a 9-foot leader, and are much better off with a 12-footer or even a 15-footer for slower pools.

Fishing with Motion
On windy fall days you’ll find the water covered with leaves, twigs, and nuts falling from trees. When this happens, it’s tough for a trout to discern food from debris, but if you twitch a hopper or beetle just once during its drift you might get a trout to pick out your fly. When fall weather turns cold and rainy as well as windy, hang up the dry flies and throw streamers into deep water, especially at the tails of pools. Brown and brook trout migrating prior to spawning in late November often stack up at the back end of pools, and although they don’t eat often once they get spawning on their minds, they get pretty confrontational and will take a swat at anything in their way. It helps to have a sinking-tip line handy, to get your fly swung across a trout’s nose in the deeper pools.

Don’t leave your other trout flies at home. You never know when you might see a fall caddis hatch or some big mayflies like the dark size 12 Isonychias. You might wonder if nymphs are effective. Nymphs are always effective, but I don’t find them as useful in the fall unless some aquatic insects are hatching. There just isn’t as much stuff on the bottom as there was in May or June. However, imitations of the small olive mayflies, midge pupae, Isonychia mayflies, plus a large caddis pupa to imitate to big orange caddis that hatches in October, should cover your nymphing requirements

It’s always difficult to choose the right fly rod for fall fishing, because on one hand you’ll be fishing small dries, but on the other hand you might decide to throw a streamer or a hopper pattern. A 9-foot 4-weight Mid-Flex rod, is great with delicate dry-fly fishing yet has enough guts to throw streamers (just cut back your leader).