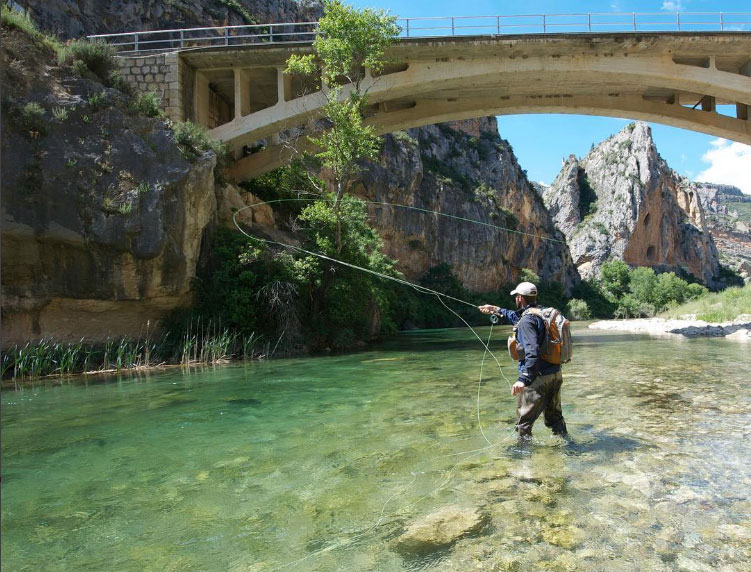 Knowing how to cast is important, but so is knowing when to stop casting and start fishing.
Photo by Sandy Hays

Fly-casting is not easy. Like any skill worth knowing, casting expertise takes a long time to develop—in some cases years. The good news is that anglers pretty much make the same mistakes, and that means your casting flaws have probably already been tackled by someone before. Of all the ways we casters foul up the presentation of our flies, these five stand out. They are the most common, and the fixes for them offer you the biggest results once you make the necessary tweaks to your stroke.

1. The Dreaded Tailing Loop
All fly casts unroll in a “loop,” which has a top leg and a bottom leg. Normally, these loops stay open, like a stretched-out letter C, with the bend unrolling toward the target. The legs of the loop do not cross.

“Punch” occurs when the angler gets excited and hammers his rod forward, often holding the rod upright like the angler was delivering a punch with a closed fist. The sudden application of forward power flexes the rod into a bend, which pulls the tip-top guide downwards—a problem exacerbated by the angler’s death grip holding the rod high in the sky. When the angler finishes his forward stroke and releases the pressure, the rod rebounds, springing the tip top skywards and creating the U-shaped path. The fix for “punching” anglers is to settle down. Focus on applying power evenly as the rod strokes forward, with the greatest power applied right before the rod comes to a stop. Be sure to rotate the wrist into the forward stroke, pointing the thumb a few feet above the target. The easiest way to practice this fix is to try to throw the slowest loops you can. “Punchy” anglers often cast as hard as they can in a misguided effort to get the fly out there.

“Creep” is a little more insidious. The proper way to make a backcast is to accelerate the hand backwards, then stop and keep the hand fully extended at the back of the cast until the backcast finishes unrolling. That way, when the angler starts his forward cast, his rod will be in position to immediately “catch” all the energy of the backcast and convert it into “load” or power for the forward cast. An angler who “creeps” is unknowingly allowing his rod hand to drift forward while his backcast is still unrolling behind him. When the tip top guide drifts forward, the rod ends up being held vertically, like an antenna on an old truck. As soon as the backcast finishes unrolling, the rod catches that force as a hard jolt. This jolt flexes the rod and drags the tip top guide downward into the classic U-shaped path, just as the angler tries to make his forward cast.


The fix for creeping anglers is twofold: first, get a friend to record your cast on video, shot from the side. Creeping anglers rarely believe they are doing anything wrong (denial is the first stage in any recovery, after all). Second, open your stance up a little bit and stand slightly sideways, so you can turn your head and look behind you. Wait for the visual cue of seeing the backcast finish unrolling and mentally note the sensation of the rod when it receives the backcast load. Only then start your forward stroke. Done properly, the load on the tip top guide will remain consistent as you push forward, preventing the U-shape and, ultimately, the tailing loop. Once you are very familiar with the sensation of the rod receiving the backcast load, you can square your stance back up, if that is more comfortable.

2. Front and Back Casts Out of Plane
An angler once asked me to diagnose the reason why he could never get his cast out beyond forty feet, even though he knew how to double haul. We went to a field, laid a long rope on the grass in a straight line, and I stood in front of him at seventy feet while he casted straight at me. Within seconds I knew the problem. The angler’s backcast was out of plane with the forecast, meaning his backcast loop was shooting out to the side (by a significant amount). Out of plane casts sloppily spray force all over the place, swinging the rod sideways like a golf club, instead of loading it in a straight, clean bend, like a bow and arrow.


I asked the angler to open his stance up so he could turn his head behind him, and focus on keeping the backcast loop directly over the rope, which made a nice straight line into the distance. He did so, and on his very next cast he shot his yarn fly right over my shoulder, adding thirty feet to his cast with one simple change.

Out-of-plane casts are easy to diagnose because they cause the fly to kick sideways when the casts turns over. If your fly is consistently landing with a 90-degree bend in your leader, your casts are out of plane. Turn your head and pick out a spot directly behind you, opposite your target, and line up the front and back casts. This fix is usually as simple as recognizing the issue, and most anglers can correct it right away.


The most common double-hauling error is hauling from the hip, rather than from the base of the rod. Properly, the double haul should begin with your hands close together and the line hand near the butt of your rod. As the rod moves into the backcast stroke, the line hand should haul down a few inches—then return to the butt of the rod, in some cases moving back up by the angler’s head. This is the part many anglers neglect; instead, they correctly haul away from the rod, but then let their line hand drift down by their hip, dragging feet of slack across their chests as they wait for the backcast to finish unrolling. When the time comes for the forward haul, they are mostly pulling on slack, and their line hands have nowhere further to go anyway.

The key to the proper forward haul is to let the backcast draw your line hand along with it as it shoots backwards, thus pulling your hand into position back up by the butt of the rod. If the haul into your forward cast starts with a tight, short length of line and your hands start out close together, the amount of force you can generate will be massively increased. Your hauls will be more effective—especially in punching into wind, and as an added bonus, your hauling hand won’t be trying to pull your rod sideways and thus out of plane.

4. Failing to Shoot Line
Almost every angler knows the concept of shooting line, but a surprising number of us think this fundamental casting technique is only for distance casting. Shooting line—allowing a weight-forward line’s head to tug the thin running line out through the guides as the cast unrolls forward—will not only make you more accurate, but will also leave you less tired. Shooting line dampens the effects of turnover, softening the forces that cause the fly to slap the water as it unrolls and making for a more delicate (and quieter) presentation. In distance-casting or saltwater applications, shooting line is absolutely necessary, as few anglers can “carry” eighty feet or more of line in the air.


A lot of anglers avoid shooting line because they dislike having tangles of running line at their feet. You can correct this with some basic line management. First, always keep your running line wet; in a boat you can throw down a wet towel or splash some water onto the floor or line tray. Wet running line is less apt to snag itself and form a knot. Second, always stretch your running line when you first pull it from the reel. Simply grab two points of the line a few feet apart and gently pull it like you were pulling out a piece of taffy. Work your way down the line until it is all stretched. Finally, stack your line in an orderly pile. Running line tangles when loops at two different parts of the line cross over each other. This forces the nearer loop to slide out from under the further loop as you shoot out line, often resulting in a knot.

To prevent this, stack the line from the back of the line to front as you lay it down. This means the most distant part of the line (the part that actually contacts the reel) should be laid on the ground first, with loops closer to the tip of the line stacked, in order, on top. If you make a habit of this as you retrieve line, the line will almost always shoot cleanly, because the front-most part of the running line will always be at the top of your pile.

5. Crashing Casts
There comes a point in every angler’s life when he decides to try for the big cast, throwing the fly as far as he possibly can. Most of the time, this attempt fails, because the fly fails to turn over and “crashes” while the line is still formed into a loop, instead of unrolling all the way to the fly.

If you lack sufficient power to deliver that fly as far as you want to deliver it, you may not have enough rod. Five weights wilt when you ask them to throw huge saltwater flies at huge saltwater distances. Often though, the problem is not your gear, but you. Seeing a cast crash out should prompt you to review your checklist of casting errors to see if any of them might be monkeying with your delivery. Are you throwing a tailing loop? Are your front and back casts in plane? Are you hauling from the hip? Ultimately, all of us could stand to get better at these fundamentals – even the best casters in the world. You can make an old fly line into your “grass line” and practice with it in any open area. Just tie a piece of yarn to the end to serve as a practice fly.

Practice on the lawn is a great long term cure for crashing casts, but it won’t solve the problem right now, and that’s where the final tip comes in. Sometimes you just need the added inertia of the cast hitting the end of the line to force the last bit of energy into the fly and cause it to turn over. Some anglers practice what they call a “triple haul,” imparting a small tug to the line just as the fly turns over to make sure the cast straightens out. This is difficult to do when you’re shooting lots of line, because you may not keep your hand on the running line as it flies through the guides. However, you can duplicate the effect by tucking a loop of line (from the section nearest your reel) into your pocket or under the belt of your waders. As the cast finishes unrolling it will tighten up against the loop you tucked away, plucking it free but giving just enough tug to help the cast straighten out.

Zach Matthews is an FFI-certified casting instructor, the editor of The Itinerant Angler website, and a writer and photographer who focuses on fly fishing and hunting. His work appears regularly in most of the sport’s publications.