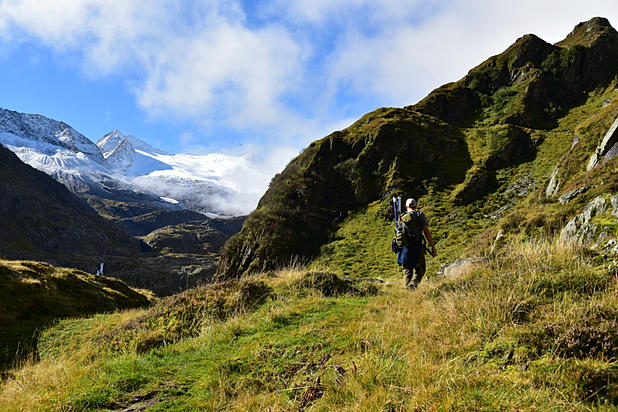 Two scouting trips showed the author what great angling opportunites are available to those willing to hike.
All photos by Oliver Streuli, except where noted

A little over a year ago, I was standing in Lava Creek in Yellowstone National Park, casting a tattered Royal Wulff to eager brook trout with my Superfine Glass 3-weight. I did a ton of fishing in Montana, but catching the feisty jewels in this short stretch of river was one of the highlights, and something I thought I wouldn’t be able to relive here in Switzerland. Fortunately, I was wrong.

Sascha Urweider runs a hotel and restaurant in picturesque Innertkirchen, Switzerland. Not only is he a great cook, but he’s a passionate flyfisherman with the kind of knowledge about fishing the Bernese Alps that only a native can acquire. He agreed to show me some of his favorite waters in the area, and I tagged along to take photos, not to fish. 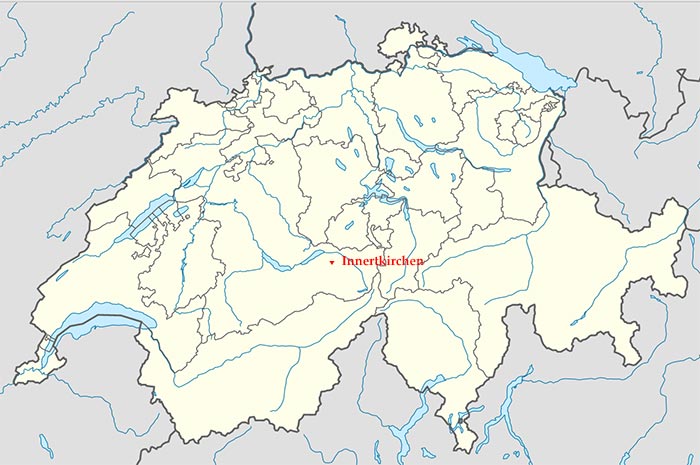 First on the list was a small alpine lake close to the Grimselpass, a mountain pass that tops out at a heady 7,100 feet above sea level before plunging down into the southern part of Switzerland. We parked and made our way along a small trail and through some brush, all while giving the local cows a wide berth. As was to be the case for the much of the day up here, the first cast resulted in a fish. Nothing particularly big, just a bunch of smaller but feisty char, but that’s to be expected at this altitude. Rumors abound of larger fish dwelling beneath the smaller ones, however. . . . Sascha rigs up under imposing cliffs. After I got enough photos, we headed back down and fished a tributary of the Aare River. Beautiful light blue water, deep gorges, lots of scrambling. . .this was the kind of place where you have to break a sweat to get to your fish, but where perseverance pays off. It’s definitely a place I’ll be visiting again next season. Sascha landed a few native browns on a Wulff as I waded after him, camera in hand. 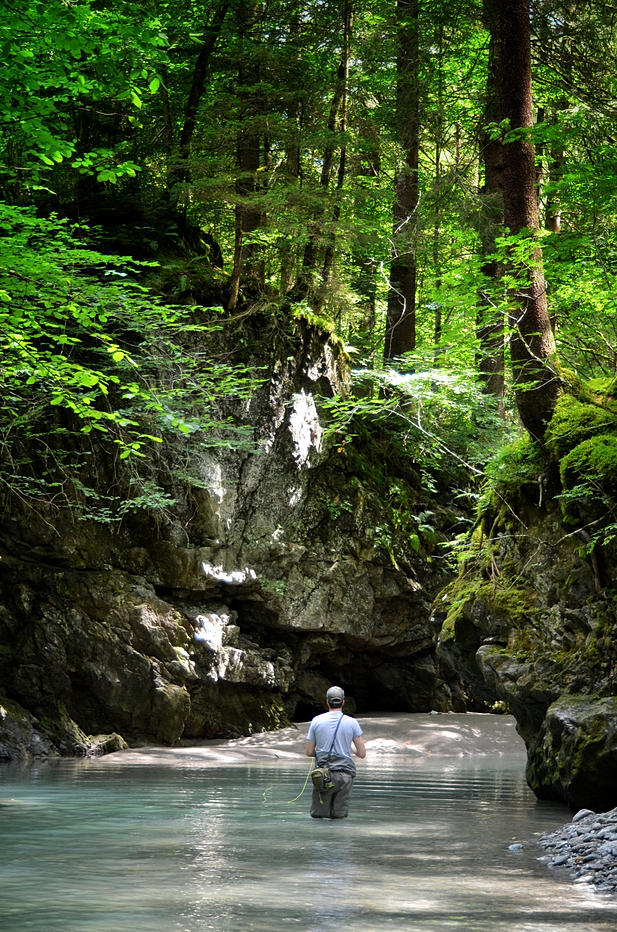 Finally we moved on and hiked up what was little more than a trickle, but in which every pool had a brightly colored, healthy brookie. This was blue-lining at its best. The sun started to sink, and we made our way back down to Sascha’s hotel, where he cooked up some gourmet burgers, and we got to know each other over beer and our mutual passion for trout.

A few weeks later, Simon, a friend and avid fly fisherman from the UK, came in for a visit, providing a perfect opportunity to visit more new waters that were a bit too far to go to last time. We spent the afternoon of his arrival trying to fish the Totensee, a lake at the top of the Grimselpass, but the wind made casting practically impossible. On the few occasions where we were able to get a line in the water, we were rewarded with rainbows and lake trout. It was a windy day on the Totensee.
Photo by Sven Burkhard After struggling with the wind and the rain, we headed back down into the valley where we spent the night at Sascha’s Hotel. At 5:30 am the next morning, we grabbed the sandwiches and coffee Sascha had left out for us and headed out. On the way to the trailhead, we got stuck behind some cows in the road, as is par for course in this part of Switzerland, and started the long hike up in the darkness. It was misty and chilly when we started, but once we got out of the clouds, the breathtaking panaroma gave us the energy to make it the rest of the way. Frequent snak breaks were required to maintain energy on the arduous hike. The terrain is every bit as steep as it looks.

We spent a good four hours making our way up the 4,500 feet to the lake, with stops for breakfast, photos, and nervous slow going on the more exposed parts of the trail. The water we planned to fish was a small pond and a kilometer or so of river winding down the slope before plunging down in the valley below. I rigged up a 1-weight, and Simon had a 3-weight, and we fished the pond first. Eager fish raced each other to the fly in this nutrient-poor alpine environment. We didn’t hit them too hard precisely for this reason, and soon we made our way to fish the little stream. I spent a good deal of time taking photos and drinking in the scenery. It isn’t a given that the weather will cooperate in the Alps, and I’ve encountered snowstorms on alpine fishing trips in August before. Simon discovers a pool with a view. The surface was like glass and we could see practically every fish. The stream was very small but full of eager fish. The fall colors of the brookies were spectacular. This nice waterfall had a decent pool at the base.

As the sun started to sink behind the peaks, our stomachs started growling, and we packed up our gear and walked a half hour or so to our accommodations for the evening, one of the 152 alpine huts scattered through the Swiss Alps. The huts are rustic, with no showers or hot water, but the beds are warm and the food is good and plentiful. For outdoor-inclined tourists visiting Switzerland, I can’t think of a better way to really experience the country and its people than spending a few days hiking and overnighting in these huts.

After a traditional Swiss breakfast of cheese, fresh bread, and birchermuesli, we headed back to the pond to meet Sascha and a friend. After a bit of chocolate and a swig of whisky for second breakfast, we fished a bit more and took some more photos before saying our goodbyes and heading back down into the valley to get Simon to the airport on time. And with that, another trout season came to an end.

Switzerland isn’t an easy place to fish thanks to complicated regulations and a dense population, but it’s worth making the effort when the rewards are beautiful wild fish in breathtaking surroundings. I’ve spent quite a bit of time over the summer months getting to know the brook trout in Switzerland, and as is often the case, the long, scenic hikes make for moments of self-reflection. I realized that maybe the reason I like brook trout so much is that we’re both transplants from New England, carving out a new life in this small, scenic alpine country.

Oliver Streuli is a film editor and fly-fishing guide who lives in Switzerland. Check out his website, Firebelly.

One thought on “Trip Report: Fly-Fishing the Spectacular Bernese Alps”