The author shows off a brown trout that was average-size for the river.
Photos courtesy Oliver Streuli

Once again, the onus, enjoyable though it may be, was on me to plan my annual fishing trip with my friend, Mark. This year, we wanted a little wilderness along with our fishing, and northern Sweden seemed to fit the bill. Mark and I chose to take a 5 day trip via inflatable kayak down a northern Swedish river in which we would stop periodically along the way to make camp and fish. And so the trip was booked, and the weeks and months simultaneously flew and crawled by, until the day of our trip in late August when Mark flew from Singapore to Switzerland where we packed our gear.

The next morning, we took an early flight from Zürich to Stockholm, and then from Stockholm to Kiruna. We were met by a taxi that took us to the lodge on the outskirts of the Swedish mining town. We deposited our gear and were brought back into town to load up on food and supplies, which went quickly, as I had planned out meals for the week. After another stop at the state-run liquor store to buy some beer and a bottle of local whiskey, we were back at camp and waiting for the helicopter to arrive to pick us up. In the meantime, we got a short briefing about the fishing as well as a map marked with potential campsites and our pickup point. 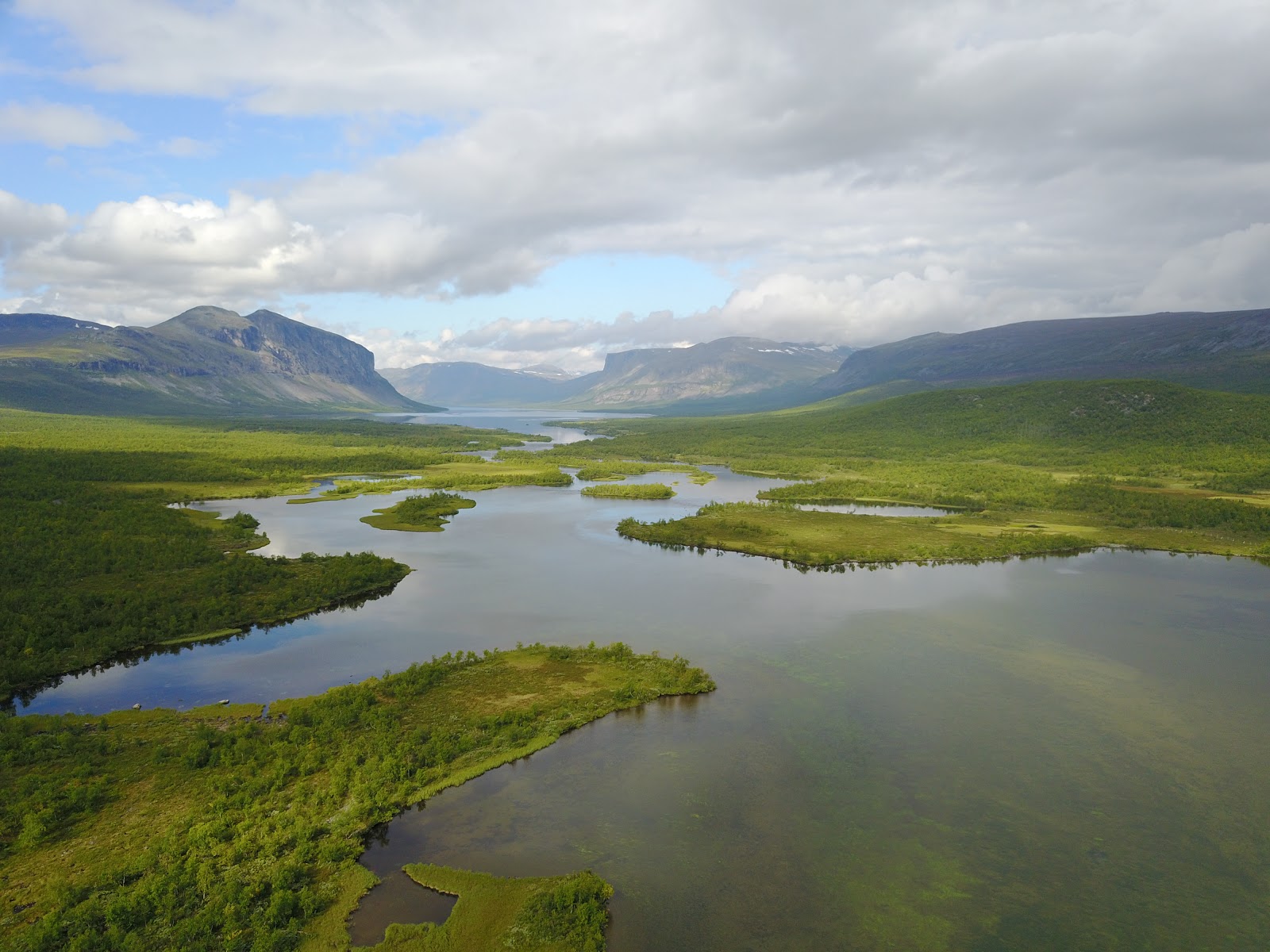 The views from the helicopter flight in were spectacular.

The minutes felt like hours–and every subtle breeze sounded like a helicopter in the distance–but eventually, there was no mistaking the sound of the approaching chopper. The flight itself didn’t disappoint, as I gazed out at the passing scenery and the river beneath. Before I knew it, we were standing amidst a pile of gear watching the heli grow smaller.

A year of anticipation, and now we where here. We didn’t have much time to reflect, as we needed to find and set up a proper camp. We inflated the kayak, while slapping away mosquitoes, loaded it with as much gear as it would hold, and then began the search for a good site. After a couple hours, we found a point on a riffle with a good view of plenty of rising fish. After setting up camp, we cooked up some sausages, drinking in both our surroundings as well as sharing swigs of the Mackmyra whisky we had brought. I waded out into the river under the almost perpetual twilight and caught a few smaller browns on dry flies before crawling into my hammock, exhausted from the journey. 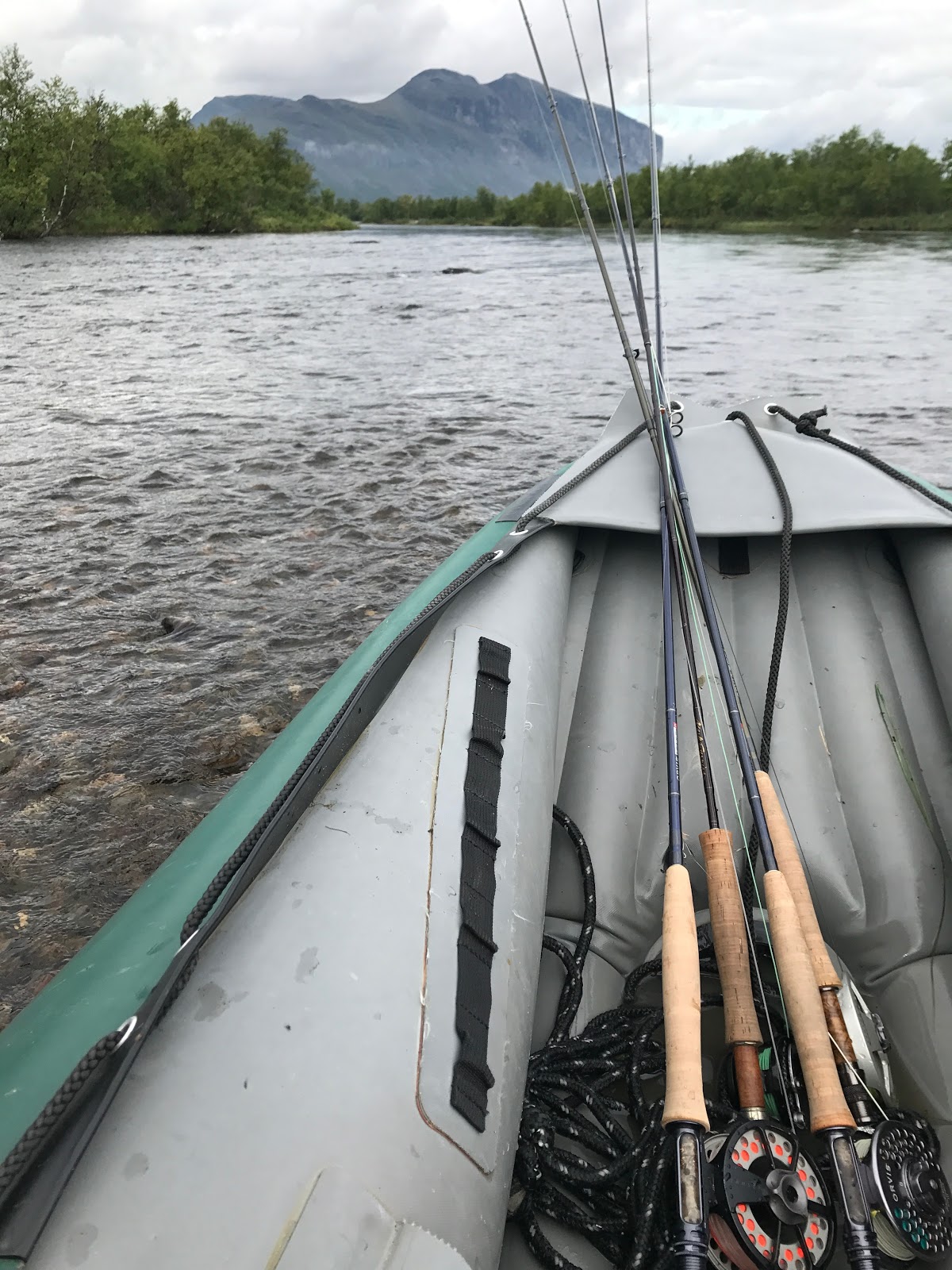 An inflatable kayak is a great way to navigate the region’s many waterways.

The next morning we woke up and prepared our camp for the forecasted rainstorms before heading out to fish. Although Mark caught some fish on drys and I had a few hits on a streamer, but the fishing was slow and we spent most of the day getting to know our surroundings. It was such a huge river that it was going to take some time to figure it out. We caught some more browns on a riffle near camp before retiring.

We woke up to a gray, rainy morning. Spirits were low as we huddled under a tarp along with half of Sweden’s mosquito population, lifting the netting from our faces just long enough to take a sip of coffee, filtering out the drowned mosquitoes with our teeth. Sitting around camp depressed was pointless, we put on our waders and grabbed a dry bag and made our way to the spot where I’d had some hits yesterday. I cast streamers into a deep hole where the river began to flatten out, and Mark cast dries to a rising pod of fish in a slick. Our mood changed instantly when he hooked a nice char, which we kept for lunch. We were just about to move on to another spot when I took one last cast with my streamer and hooked a nice brown that joined the char on our dinner plates. We had some more success throughout the day, catching good-size browns on dry flies. The weather changed for the better, the mosquitoes were slightly less ever-present, we watched in awe as a pair of moose swam across the river directly in front of camp. A delicious dinner of fresh trout and baked potatoes drizzled in olive oil made sure that the day finished off much better than it had started. 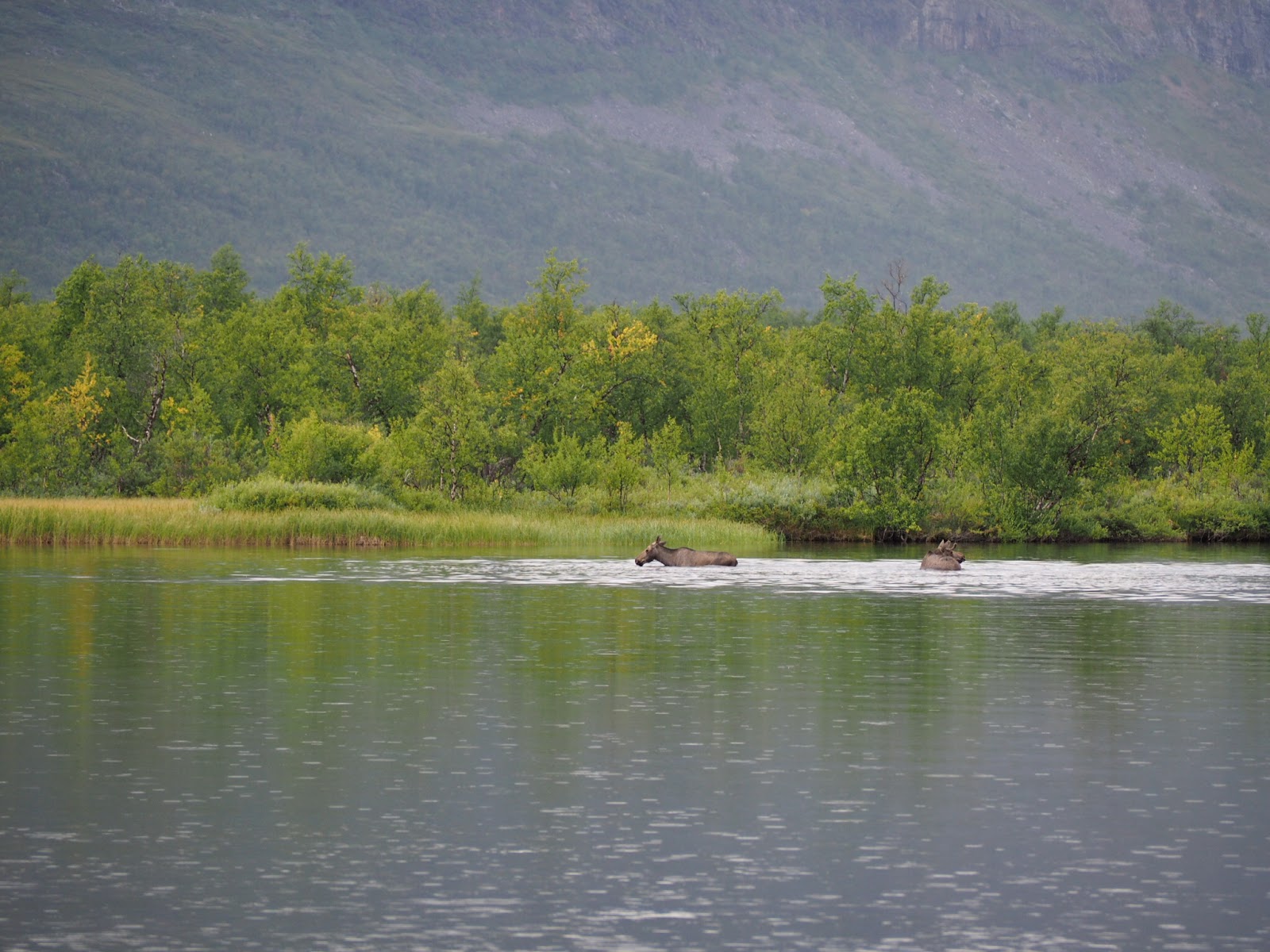 One of the awe-inspiring sights from the trip.

Day four was moving day. We needed to make our way downriver in order to make it closer to our pick-up destination. We decided to play it safe and only pack half of our stuff into the kayak. Theoretically we could have packed it all in but it would have been quite overloaded and the chance of losing something in the rapids was high. We headed downstream for an hour or so, past two camps of fishermen, through two larger lakes and smaller sections of easy rapids before we found a suitable spot. The ground was much drier, and as before, we were located just at the top of a promising section of fast water. We deposited half the gear and began to head back to the first campsite.The wind picked up, and we had to head both upstream and directly into the wind. A long, exhausting afternoon loomed large. Hours of rowing, complaining, portaging, and laughing later, we arrived at our new camp with the remaining gear.

The weather was beautiful on the fifth day. We saw blue skies for the first time, and there was enough wind to keep the mosquitos at bay but not enough to make casting particularly difficult. I caught fish all morning on streamers, while Mark was doing well on nymphs. After lunch, I put Mark in a good spot I had found earlier, and he landed some fat fish on a Matuka. The wind remained strong all day, and we didn’t see any actively rising fish, but Mark, the eternal optimist/dry-fly snob, tied a Stimulator on his 4-weight and tried anyway. He had luck almost immediately, and I decided to switch to a Klinkhammer and move my way through the rocks casting to holding water, as well. It was a good strategy, and my favorite way to fish. At dinnertime we headed back to camp. 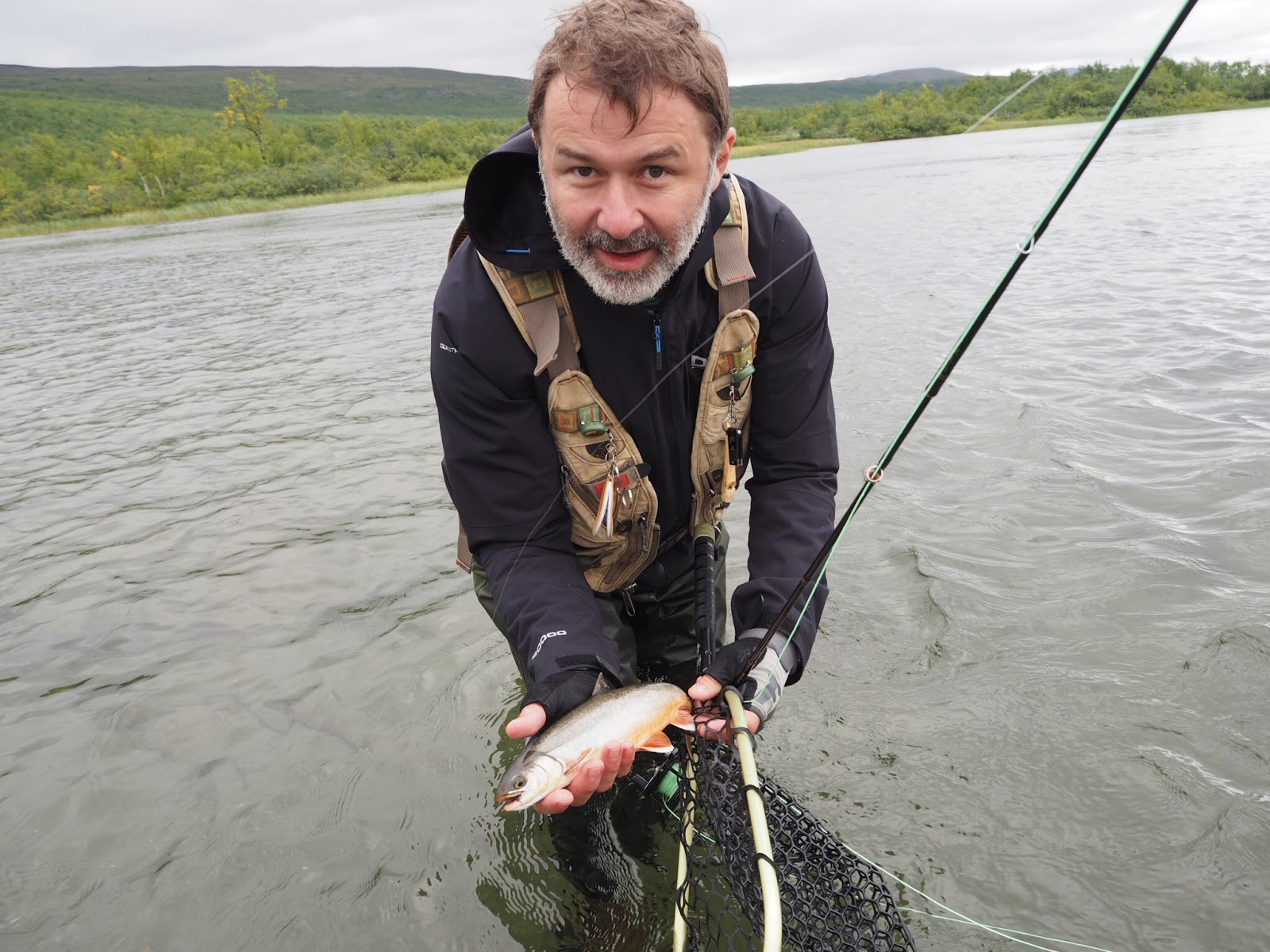 The last day of our trip was already upon us, and I focused on casting drys to likely looking spots among the many rocks and riffles. I packed up all my rods except for my 5-weight Helios 2, walked to the bottom of the long section of rough water next to our camp. Wading and rock-hopping my way slowly back upstream, I cast a Stimulator to inviting seams and pockets. Every so often, I was rewarded with an unexpected take that came out of nowhere. And so I spent the rest of the day.

Shortly before the 3 p.m., the agreed upon time to head towards our extraction point, I came across some larger trout slashing and jumping in a big slick. It was a good distance away, and I didn’t have the time to wade carefully to a more advantageous position. So I launched a Hail Mary cast that dropped the Stimulator in the center of the slick. The drift was brief, but it was enough to entice a fat, 16-inch fish to rocket out of the water and hammer my fly. He immediately launched himself back in the air and somersaulted 12 feet or so directly toward me in spectacular fashion. I was taken by surprise, but I raised my rod tip, took up line as quickly as I could until I felt his weight at the end of the line, and then he promptly snapped me off. I stood there grinning, my leader whipping in the wind, taking this last fish as a fitting goodbye to Sweden but also an invitation to return.

Click here for lots more great photos from the trip.

If you’re interested in doing a similar trip, contact Pukka Destinations, a company run by a German gentleman named Carsten Dogs who organizes trips to the area. Oliver Streuli is a film editor and fly-fishing guide who lives in Switzerland. Check out his blog, The International Hobbyist. 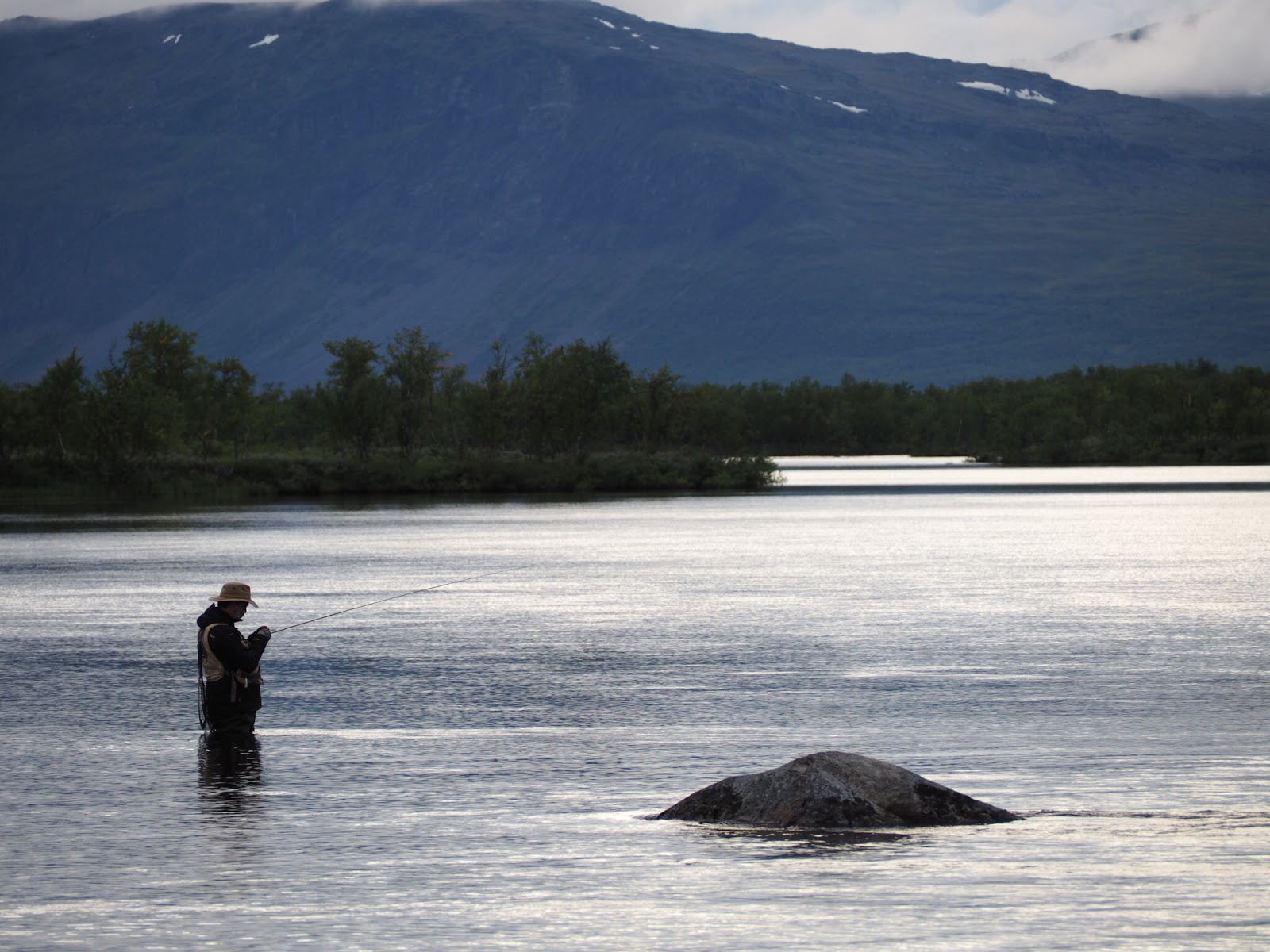 Mark ties on a fly amidst rising trout.