The author’s first marble trout was the whole reason for the return to Slovenia.
Photos courtesy Oliver Streuli

It’s hard to believe how quickly time passes, but for our 7th annual fishing trip this year, Mark and I decided to revisit Slovenia. We had a great time last year, but we wanted another chance at a marble trout, something that eluded both of us in 2015. Again, we flew into Ljubljana, Mark from Singapore, and me from Zürich. We wasted no time in stopping at the local grocery store and grabbing some unpronounceable snacks and beer and headed directly to the Idrijca River, where we had some luck last time. Sadly, it was slow fishing all afternoon, and the only thing we managed was a lone rainbow on a streamer to get the skunk off.

Creatures of habit that we are, we had a plate of calamari and some beer, and headed to Kobarid to meet Matt Calderaro, a.k.a the Soča Cowboy. We chatted and drank, and headed to our B&B in the small town of Prapetno, had a glass of whisky, and called it a night. 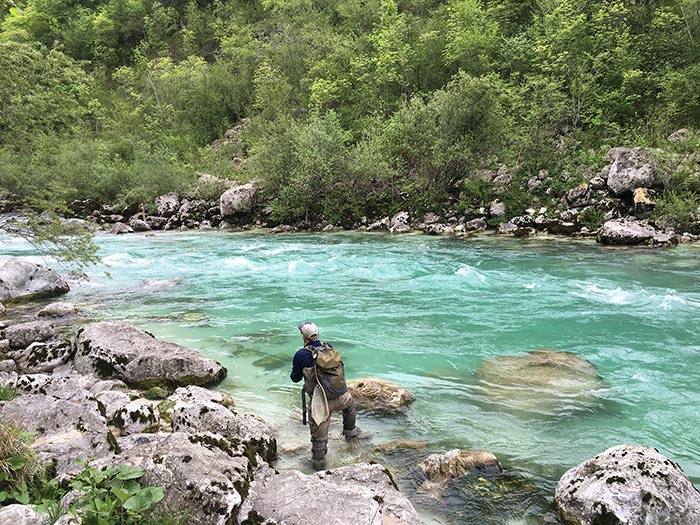 The beautiful blue water of the Soča River is cold and clear.

At 9 a.m. the next morning, we met Matt for a thick cup of coffee and headed down into the Soča Canyon on foot. We immediately saw a good-size fish rising, but we put him down as we approached too closely. (Matt thought it was my height that scared him off, but I blame Mark.)
Car-size boulders and a fast current made progress slow, but soon enough I came across Matt watching a feeding fish. We lost sight of the fish but Matt generously gave me first crack, and after I bounced a Royal Wulff off a boulder into a pocket, I set the hook into a nice fish. It didn’t take long for us to realize that it was a marble, and a nice one at that. Matt netted it, Mark took some photos, and I was on cloud nine. I had done what I had come here to do, and everything else was just gravy.

Now I just wanted Mark to hook into a marble, as well. Alas, these two fish were the only active ones we came across. We exited the river for a cup of coffee, and Matt headed back home to Austria, while Mark and I returned to the Soca. We threw streamers, as there was no surface activity in the drizzling rain, and I ended up hooking a few rainbows and another marble. Mark hooked a few ‘bows, as well. We called it day and headed back to the B&B for a simple yet hearty bowl of mixed grilled meats and vegetables and good Slovenian beer. 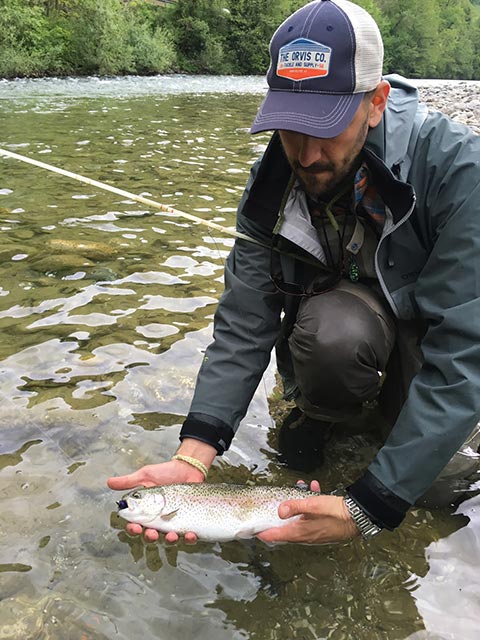 The next morning, we decided to visit the Bača River. Lousy weather was predicted, but we were pleasantly surprised by some warmth and the occasional rays of sunshine. We dropped into the river and started working our way upstream. I dropped a Black Magic nymph in a likely looking hole and hooked a decent marble, while Mark stuck with a dry and was having luck there, as well. Soon, we came across what looked like a small fish feeding a few inches off the bank, but when Mark cast to it and hooked it, I quickly realized it wasn’t a small fish after all. Mark landed the big, beautiful brown on his 4-weight.

We worked our way upriver slowly, methodically spotting rising fish and fishing the pools carefully, trying to leave the fish at the head of the pool undisturbed while we peeled off the ones from the rear. In some cases we succeeded, but usually we did not. These fish are wary, and they see lots of flies and fishermen during the season. Another memorable moment came when I spotted what I thought was a fish in a riffle, I dropped a nymph next to him a few times, then asked a perplexed Mark if I could borrow his dry-fly rigged Morgan for a moment and handed him my Helios 2. I dropped a fly over the fish, and brought a nice marble to hand. 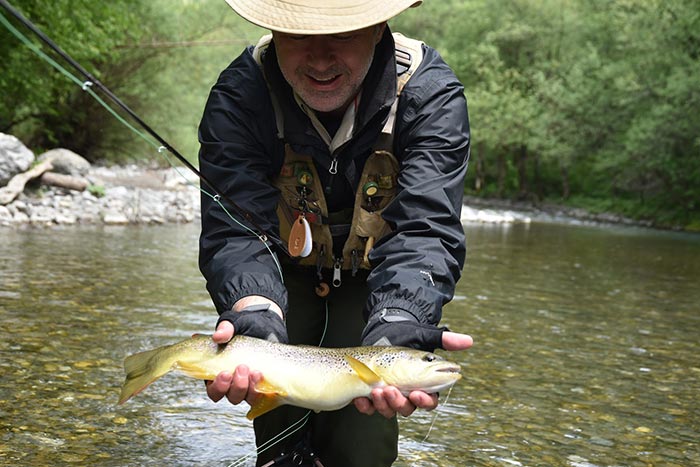 Shortly afterwards, Mark took the next rising fish, and it was a beautiful marble. The pressure was off, and we wound our way through the beautiful Slovenian countryside, catching visible rising browns and marbles, as well as coaxing fish from likely looking spots on dry flies. Mark came across a World War I artillery shell casing, not an uncommon occurrence around here, as this region suffered greatly in the Great War. The Soča Valley was one of the bloodiest fronts of the conflict, as 1.7 million people died here as the Italians tried to drive into Austria repeatedly over a span of two years. It was hard to imagine this valley as anything other than a verdant and serene angler’s paradise. The sun set, and we made our way back to the car, grateful to have enjoyed one of those days that makes a trip memorable.

The next morning we decided to revisit the Bača to recreate some of the magic of the previous day. Unfortunately, the weather didn’t cooperate. We spotted a few rising fish during the occasional break in the driving rain, and Mark spotted, cast to, but unfortunately spooked a monster of a fish, with a head as thick my fist. I managed to catch a rising marble and a grayling, but other than that, the fish stayed down and weren’t interested in what we had to offer. We loaded our soaking wet gear in the car, and headed back to the airport. 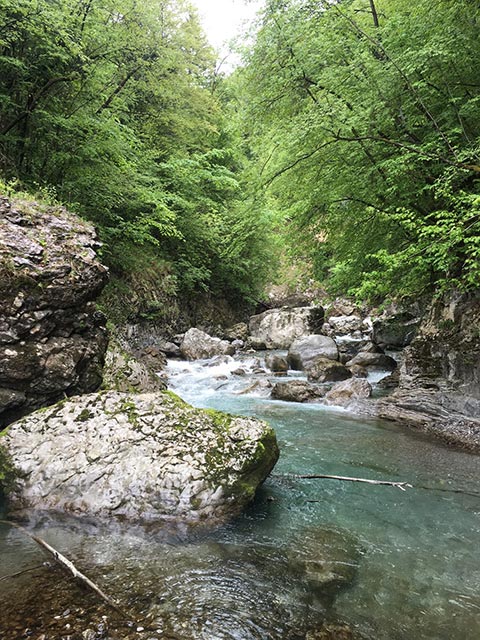 The Bača River is a pristine freestone stream with great holding water.

Once again, Slovenia was great. Last year we went during the summer, and we caught more fish to be sure, but I’d say the quality of fish was much better on this trip. As we did last time, we found Slovenia to be a beautiful, clean country full of friendly and hospitable folk. We won’t be back next year, as we’ve already decided to mark the somber occasion of my 40th birthday with a week in the Swedish wilderness, fishing as far as away from civilization as we can get, but for 2018, who knows?

Click here for lots more great photos from the trip.

Oliver Streuli is a film editor and fly-fishing guide who lives in Switzerland. Check out his blog, The International Hobbyist 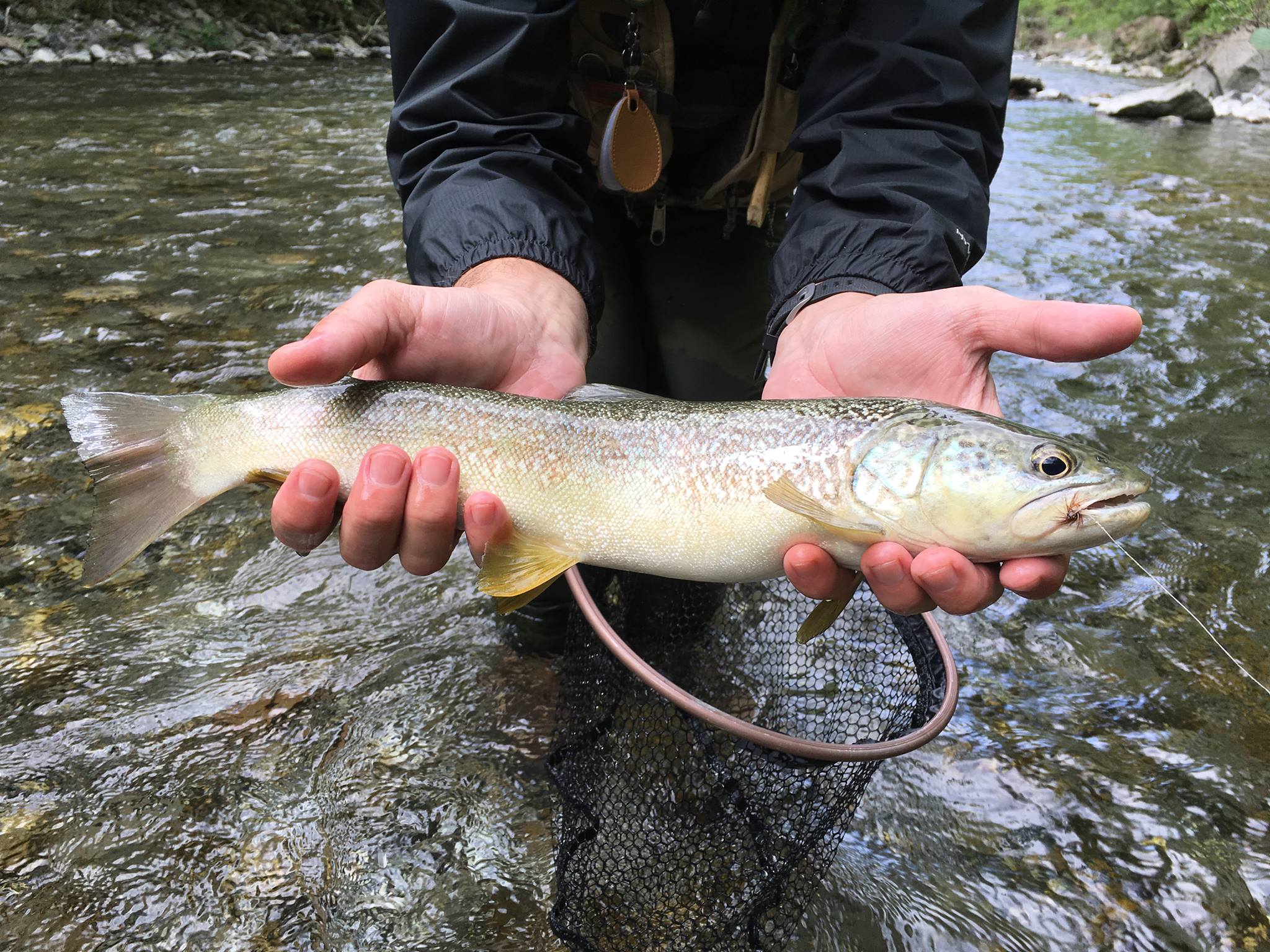 Mark’s big marble was the fish of the trip.

One thought on “Trip Report and Photos: A Second Chance in Slovenia”