Brett Prettyman spent twenty-five years as the outdoor writer, editor, and columnist at the Salt Lake Tribune. He also produced, directed and hosted “The Utah Bucket List” and “The Utah Bucket List 2” television shows, which won two Emmy Awards. The author of Fishing Utah and the revised Hiking Utah’s High Uintas, he has contributed freelance pieces to numerous outdoor publications and provides fly-fishing gear reviews for The Gear Institute.

He is currently vice president of the Outdoor Writers Association of America and on the national executive board of Reel Recovery, a national nonprofit that provides free fly fishing retreats for men with cancer.

Last June, Brett started working as the Intermountain Communications Director for Trout Unlimited, which means that Wyoming, Utah, and Nevada are under his watch, as well as Yellowstone and Grand Teton national parks. He also serves as the communications lead on TU’s Youth Education team and is excited to be a part of the new Utah Cutthroat Slam launching this spring. 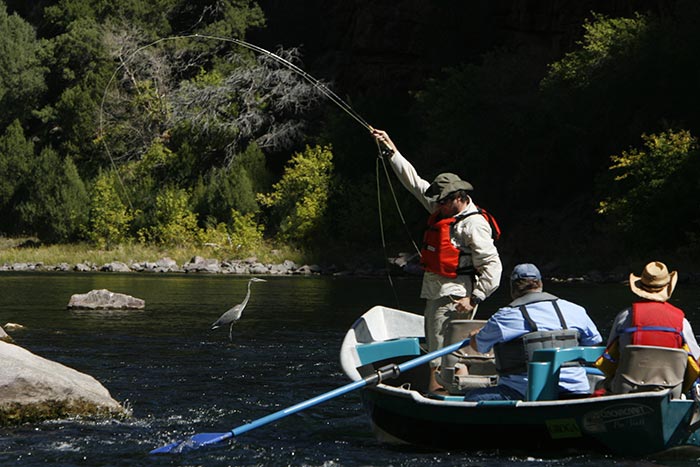 Brett sets the hook on the Green River, with the late legend Denny Breer on the oars.

1. When did you start fly fishing?
I first used dry flies behind a casting bubble in the high-mountain lakes of Utah’s Uinta Mountains in my pre-teen years. I continued to fish with a casting rod until my senior year in high school. I wanted a fly rod but couldn’t afford one. I spotted an old fiberglass rod in my best friend’s garage. He owed me some money, and I told him I’d take the rod in exchange. A guy I worked with took me casting at a local park and then took me to his home waters in Idaho—Henry’s Fork and Box Canyon. That pretty much sealed the deal.

2. What’s your favorite water?
I have a lot of favorites, but I generally refer to the Green River below Flaming Gorge Dam as my home water. (See the video below.) I first fished it in the early 1990s. The scenic beauty of floating and fishing the deep, red canyon of the upper section is worth the trip alone. People often ask me if there are any secrets to fishing the Green. My standard answer is, “Look up every once in a while and appreciate the place.” The number of fish in the Green is astounding, but can also be frustrating when they are being picky. A large portion of my fishing memories have been created on the Green. The Missouri River near Craig is strong second, and I wish I could spend a lot more time on that river.

3. What’s your favorite species to chase with a fly rod?
I’m a trout guy, but have caught many species on a fly rod. Brown trout and cutthroat trout are probably my favorite to chase with flies. It likely has as much to do with the amazing places they live, as with the species themselves. Catching bull trout in Idaho and Dolly Varden in Alaska on fly rods was particularly special, as well. 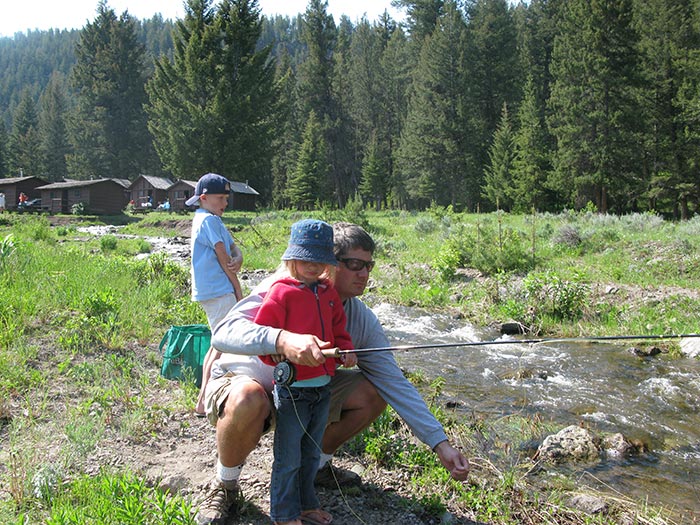 Fly fishing in Yellowstone National Park with this kids was a special moment.

4. What’s your most memorable fly fishing moment?
In 2008, we loaded up our family for a trip to Yellowstone National Park. It was more a hiking/wildlife viewing trip, but I had my rods, just in case the opportunity presented itself. Many of the rivers were not fishable due to high and late runoff. The Firehole was combat fishing as the only real fishable water. We were staying in the cabins at Roosevelt when my 4-year-old daughter looked at me with those baby blues she knows I can’t say no to and said, “I want to go fishing, Daddy.” My 5-weight rod was a little more than the creek required, but catching fish with her and my son for hours that day is etched deep in my memory bank. Catching a Yellowstone cutthroat trout from shore of Yellowstone Lake with my son was another special memory.

5. What’s your most forgettable fly fishing moment?
Once, while floating the Green in March, we had an ugly encounter with some guys who were obviously not serious anglers. About two miles before the takeout ramp, we started seeing beer bottles floating, tips-up in the river. They had been filled just enough with water to float that way. The guy on the oars, Brad Lovejoy with Western Rivers Flyfisher, worked hard to collect every one of them. We had not seen another boat on the water, but not long before the ramp, we came across one with a couple of guys. You guessed it: they were drinking from the same bottles we had collected. Brad asked if they wanted their bottles back, and they denied it at first and then got belligerent. They mellowed out when the other guy in the boat, a colleague of mine from The Salt Lake Tribune, started taking pictures of them. They bid us adieu with some single-finger salutes and we left. The bottles ended up in the back of their truck – the only one at the ramp. I heard later that the sheriff busted them for DUI after they left the river. 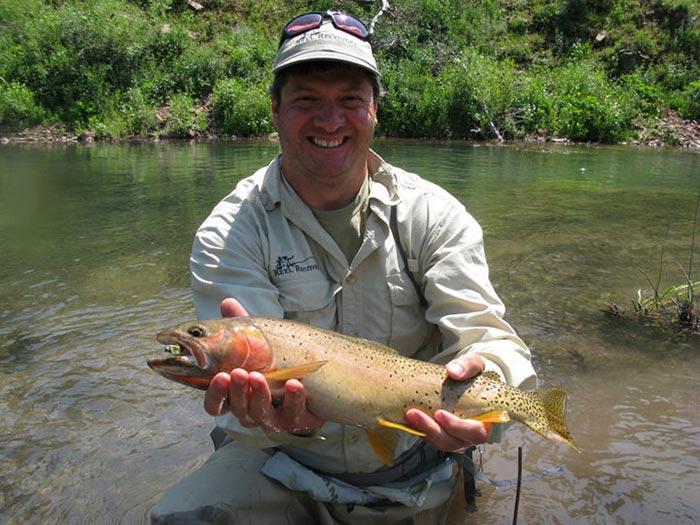 6. What do you love most about fly fishing?
The escape. Fly fishing is the one activity in life where I can actually devote my complete attention and tune out all the chaos of the daily grind. That being said, I don’t feel like I’m that focused while doing it. Fly fishing, at least in some cases, is being able to focus on one two-inch square of moving water while floating in a bobbing dory and trying to keep your balance. Despite this, I’m still able to appreciate the distinctive call of a canyon wren or a cardinal and recognize that a deer is standing knee-deep on the other side of the river. Now that is multi-tasking. Trout live in beautiful places, and I thank them for doing so—they are the means to escape. Another important factor is the bonds that happen on fishing trips with family and friends. Memories forged on the river come in handy when work and everyday life get chaotic.

7. What is your favorite piece of gear?
I’m not sure it counts as gear, but my favorite things to have on the river are my senses. To be able to see, hear, smell, feel, and yes taste, the river and environments around it are what make fishing so refreshing and the things that make me yearn for time on the water.

8. What’s your go-to fly when nothing else is working?
It doesn’t work as well as it once did, but the Chernobyl Ant has always been one of my favorites. I have used it in desperation on many trips ranging from big rivers to tiny creeks and high mountain lakes, and it has almost always saved the day. 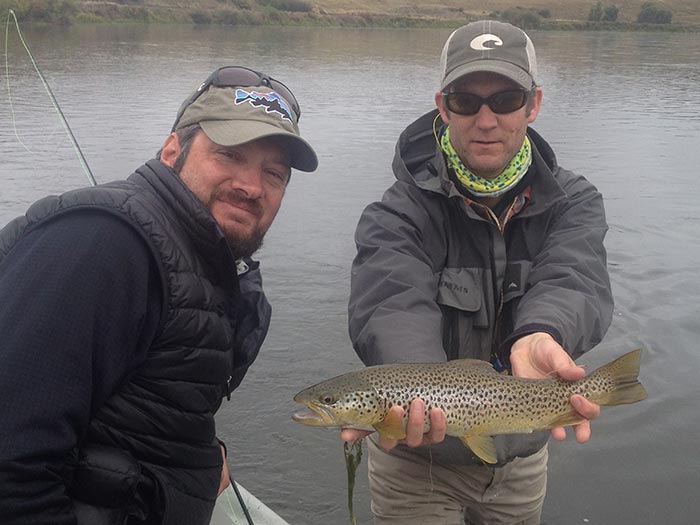 Sharing a brown trout brought to hand on the Missouri River with Peter Vandergrift.

9. What was your favorite fly fishing trip?
Fishing during a trip to Alaska for the Outdoor Writers Association of America annual conference fulfilled a lifelong goal. I caught big Arctic grayling in their native waters, hooked four species of salmon, and caught more Dolly Varden than I can remember. The friends I fished with on that trip played a major role in why it was my favorite.

10. How do you define the difference between someone who loves fly fishing and a true trout bum?
I feel it is safe to say that anybody who fly fishes loves it. Why else would they put themselves through the inevitable frustration, expense, and chaos of the sport? A true trout bum is someone who sacrifices other electives in life to try and trick a fish with a replica of its desired prey. A trout bum, in my opinion, is someone who gives something back to the collective fly fishing tribe and, ultimately, to the future of fishing as a whole. 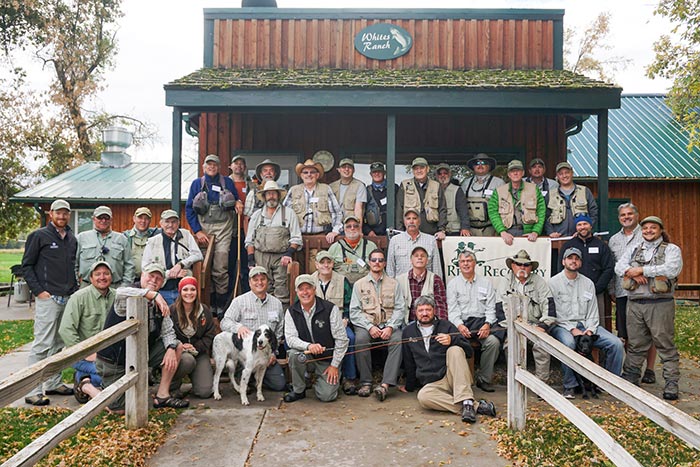 The participants, buddies, and volunteer staffers at the Fall 2015 Reel Recovery retreat at White’s Ranch in Utah.

One thought on “Trout Bum of the Week LXVI: Brett Prettyman”