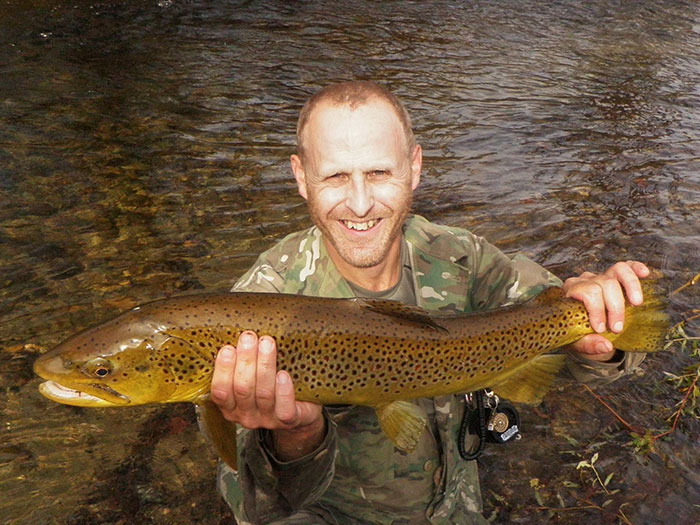 Drew Price has a knack for finding the big fish that Vermont isn’t really known for.
All photos courtesy Drew Price

Drew Price runs Master Class Angling, a guide service in northwestern Vermont, where he takes clients fishing for everything from smallmouth bass and pike to bowfin and carp. But he also loves chasing big trout and landlocked salmon in the rivers that flow into his beloved Lake Champlain. He’s posted several great articles here over the years. See How to Fly Fish for Longnose Gar and 10 Tips for Fall Streamer Fishing. 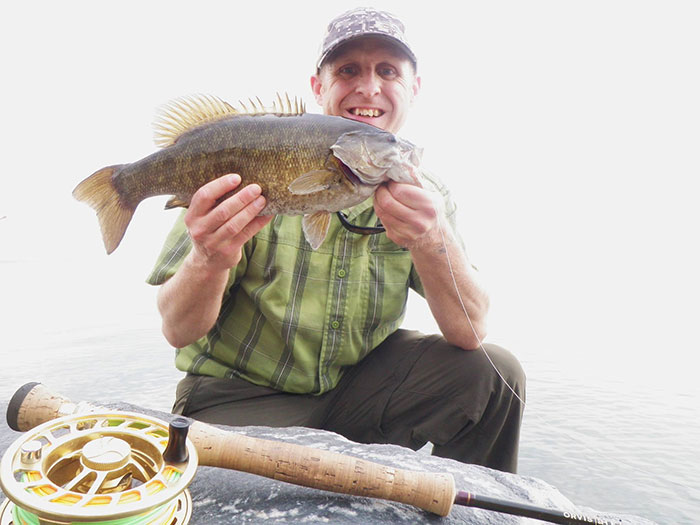 If it swims, Drew is willing to cast a fly to it, but he has a special love for smallmouths.

1. When did you start fly fishing?
I got my start in late 1993, when I asked my parents for a fly-fishing outfit for graduation from college. It was a December graduation, but I spent that winter learning to cast on the snow. I picked up an el cheapo fly-tying kit within a month, too. My tax return went to waders and other gear. By the time spring rolled around, I was full involved. I didn’t get into a fish until May that year, but appropriately it was a smallmouth bass.

From the start, I was a bit of a nontraditional fly angler; I had a thing for warmwater fish. I got an 8-weight that next summer and started poking around for pike. Within a couple of years, I had the musky-on-the-fly bug, too. That was pretty tough the first few years because I didn’t have a water craft yet, but I still managed to get into some nice muskies. I was chasing anything I could catch on the fly pretty much right from the get-go.

2. What’s your favorite water?
I was having a conversation with a friend a couple of months ago about the fact that I am in my mid 40s and wasn’t married. The response I got was pretty telling. He said, “You are married, man—to Lake Champlain.” There is a lot of truth to that statement.

I love the diversity that Vermont has to offer. Great trout streams are all over the place (with some huge trout, if you know how and where to look for them), and the warm water fishing is spectacular. Vermont has it all. 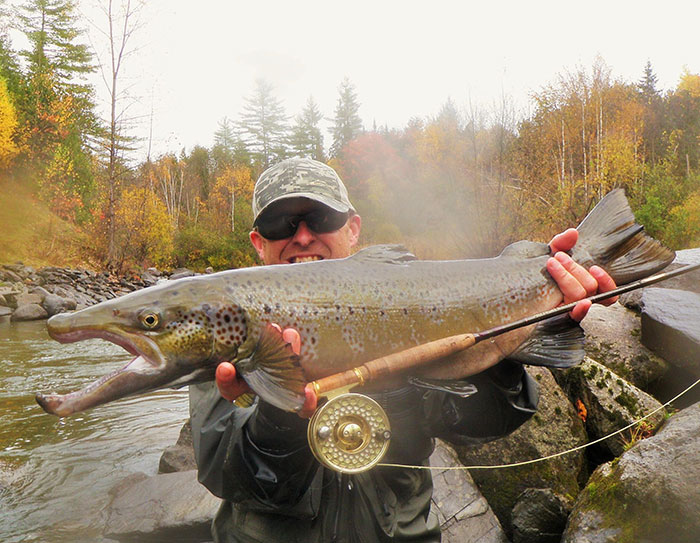 3. What’s your favorite species to chase with a fly rod and why?
Honestly, that I can’t answer definitively. I kind of think of myself as a seasonable angler because I adapt my fishing to whatever is biting best at that moment. I really like being able to go after a lot of different fish. I start the year chasing trout and steelhead; then go to bass and pike; then get out after bowfin, carp, drum, and gar with some muskies thrown in the mix; and by the fall I am thinking salmon, big browns, and lakers. Of course, in between all that are the panfish, pickerel, perch, suckers, fallfish… My friend Lawrence Pyne once described me as the Will Rogers of fly fishing—I haven’t met a fish I didn’t like.

There have been a couple. I got to guide Jeremy Wade of River Monsters a couple of years ago. It was pretty awesome to film with him, but that was pretty stressful, too, because the heat is on and you really need to produce fish. What was really cool is that he came back to Vermont later in the summer and got out with me to chase carp. It was a blast, even though the carp were being particularly difficult.

Getting my personal-best musky ranks right up there, as well. I was wading, which made it pretty interesting. The fish was in the mid 40-pound range, and I had on 2X Mirage tippet with a wire trace. The fish tore off downstream through some serious current, and I had to chase it. It took about half an hour and a third of a mile downstream to land it. I came close to losing it when I first got my hands on it, too. The leader wrapped around the first stripping guide as the fish started heading back out into the water. I had to run after the fish, unwrapping the line. I feel pretty awesome about that fish. 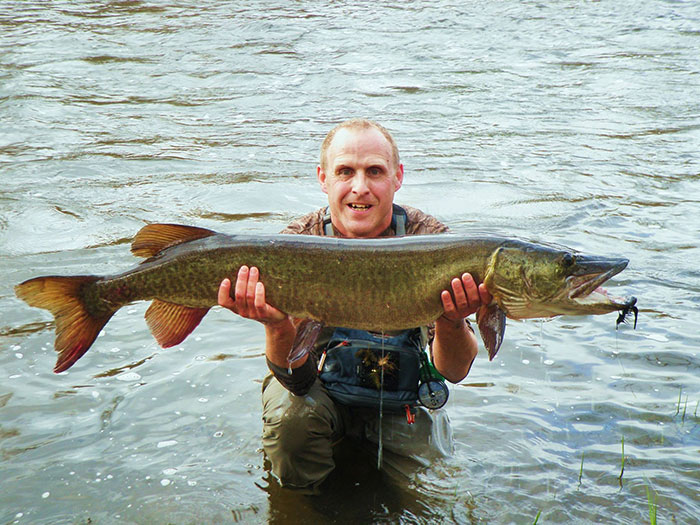 Drew’s personal-best muskie put him through the wringer before coming to hand.

5. What’s your most forgettable fly-fishing moment?
I would rather forget this moment. So it involves muskies again. There is a river I have been fishing for many years that just won’t give up a fish for me. My buddies have all caught fish there. I have had serious takes, follows, fish on… but not one musky to hand. It has been pretty frustrating.

On the second day of a weekend of musky fishing, we were on that river. Within half an hour of being there, I had a huge musky swirl on my fly. The water was shallow and a lot of water moved. I didn’t get a hook set. I was already tired from the previous day, and my mood was less than stellar. After casting, casting and more casting, I had another fish come up and slam the fly. I had it on for about 15 seconds, and then it was gone.

At that point, I totally lost it. I had a complete meltdown hissy fit: stomping my feet, yelling, and whining. Oh, did I look and sound like a total idiot. My buddies whom I was fishing with were all laughing at me because I was acting like a little kid that had dropped his ice cream. I am still embarrassed when I think of that. But I will get back there and conquer that river… 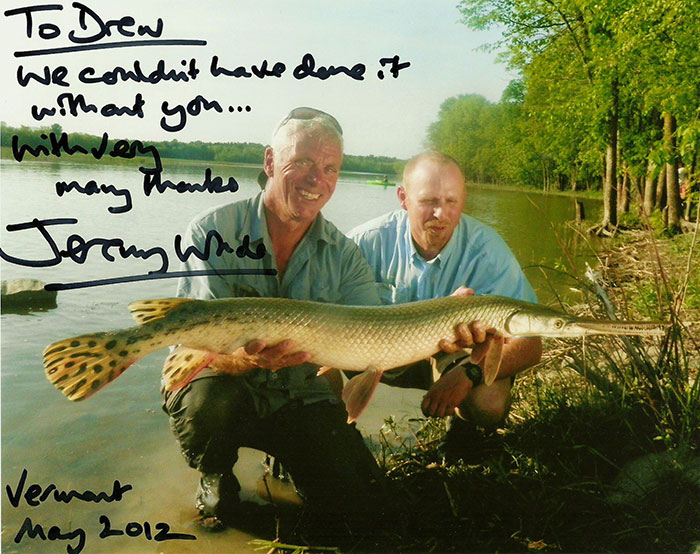 6. What do you love most about fly fishing?
When I am on the water I can let everything go. It is just me, my gear, and the fish. Nothing else matters at that time. It is my religion. It is how I recharge my soul. I spend time on the water to let go of things, to think, to center myself. Fly fishing lets me do that.

And, oh yea, screaming reels too.

7. What’s your favorite piece of gear and why?
I am going to sound like such an Orvis suck up here but here goes. I have a pair of the Orvis Hydros Freshwater pliers that goes with me everywhere. I have had them since 2011, and they are beat up and I have had to make several repairs to the holster (think duct tape and rivets). I am still on the first pair of cutting blades, too, and they have cut everything from 6X tippet to 60 pound wire over the years. Those things are indispensible. I honestly don’t feel right on the water without them.

And 3X Mirage tippet. My go-to tippet for a lot of different fishing. I have landed carp up to 35 pounds with that stuff. It knots well, is really abrasion resistant, and disappears in the zebra mussel clear water of Lake Champlain. I really trust that stuff like nothing else. 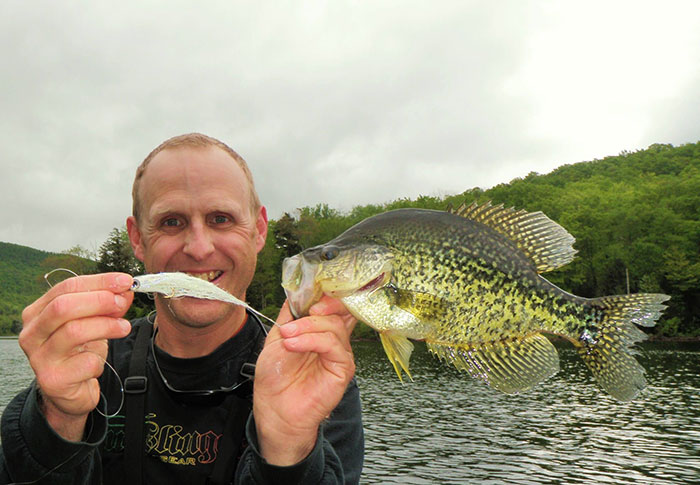 This slab crappie fell for a fly that’s bigger than most folks would cast to panfish.

8. What’s your go-to fly when nothing else is working?
I have three that I don’t go without: an olive Conehead Woolly Bugger (size 4), pink-and-white Clouser Minnow (size 2), and a Firetiger Clouser Half and Half. Yea, I know, I couldn’t choose just one. But really those are the go-to flies for many situations for me. Buggers work on everything from trout to carp to muskies. And Bob Clouser is a freakin’ genius for his use of dumbbell eyes on flies. That jigging action kills it.

You can probably tell that I am not a fly angler that is afraid of a seriously weighted fly. I tie my flies so they can get down fast. I think you can get a lot of variability out of a fly if it is weighted.

9. What was your favorite fly-fishing trip?
I have had a lot of great trips but I would say that heading down to Miami with my friends Marty and Tim to work the flats of Biscayne Bay with Cordell Baum Jr. would rank up as one of the best ever. We drove down with my canoe. The fishing was tough but really familiar to me because of the shallow-water fishing I do on Lake Champlain. The first morning out, I managed to put Tim on a bonefish. That felt pretty awesome! 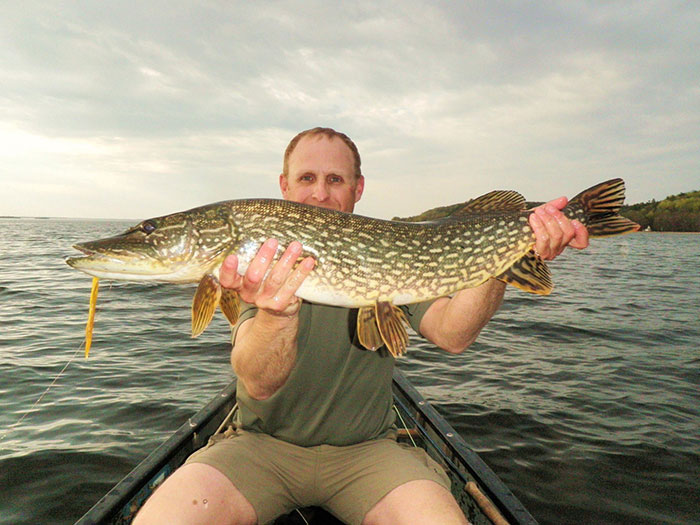 Lake Champlain’s pike fishery doesn’t get much press, but it produces some big fish.

I got into a couple of bonnethead sharks and a nice bonefish, too. There were lots of fish around: permit, barracuda, redfish, and big sharks. I really wanted a bull shark or a black tip, and I missed a take from one when I pulled the fly out of its mouth during a strip-strike. It was seeing the sheer power of one of those fish turning on the fly that left me awestruck. I will be back, Cordell!

The most fun we had was chasing peacock bass and other exotics in the canals around Miami. Those things are a ton of fun on a 5-weight.

The absolute best part of the trip was the company, though. When you get to spend time with good friends out fishing, it really doesn’t get any better. I have a great group of guys that I am fortunate enough to fish with regularly. We have a blast together and really any trip I get to go out with any of them ranks up pretty high in my book. 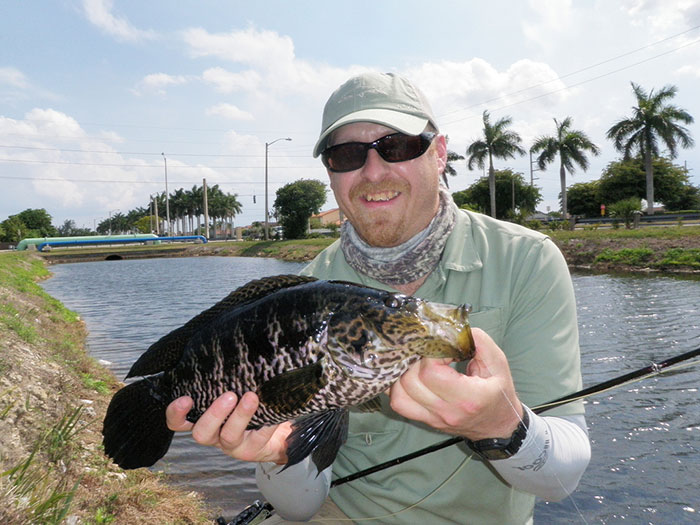 Drew was excited to land an exotic guapote on his trip to Florida with his buddies.

10. How do you define the difference between someone who loves fly fishing and a true trout bum?
Can I answer that after I get back from the lake?

6 thoughts on “Trout Bum of the Week XLI: Drew Price”