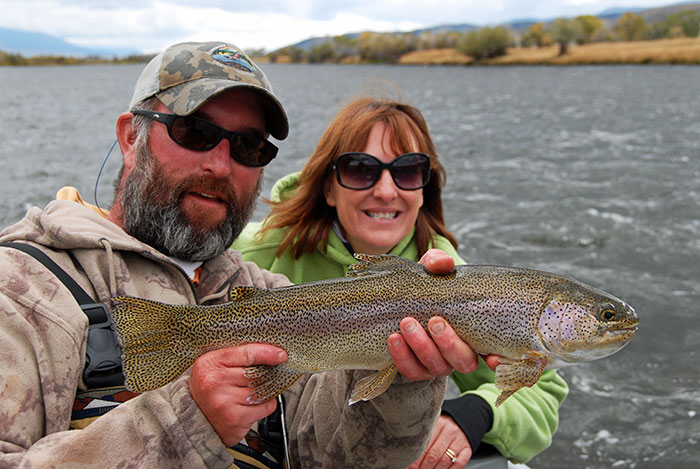 Lisa Savard runs Savard Hospitality Consulting, along with her husband, Tim, from their home alongside Rock Creek near Clinton, Montana. Before they moved out West in 2014, Lisa and Tim owned and operated Lopstick Lodge & Cabins in Pittsburg, New Hampshire for more than two decades, building it into one of the more successful fly-fishing lodges in the Northeast. (Lisa and I met longer ago than that, when we were classmates at Sanborn Regional Middle School in Kingston, New Hampshire.) She now spends her time consulting with other lodges, sharing the knowledge she acquired while transforming Lopstick from a collection of small cabins into a bustling year-round operation. As you’ll see from her answers below, Lisa has some strong opinions, which she doesn’t mind sharing, and she loves to tell a good story.

1. When did you start fly fishing?
I used a fly rod when first I started fishing, when I was probably 5 years old. We only had fly rods. But I didn’t actually cast a fly rod until much later on. My grandfather—who had been a fishing guide as a young man in Pittsburg, New Hampshire on the Upper Connecticut River—taught me to thread a worm onto a hook, swing the line back and forth, and then expertly plunk it into the desired spot. While this is far from graceful, it did teach me to read the water for precision plopping. I spent summers in New Hampshire’s north country with my grandparents, fishing the numerous tributaries of the Upper Connecticut. I was not allowed to fish the Connecticut itself because they considered it too large for me. So during my youth, I caught little brookies, mostly natives, with my telescoping fly “pole.” 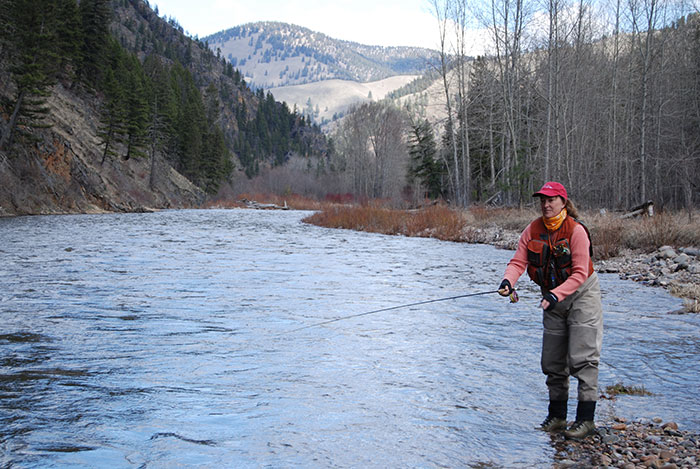 Lisa casts a nymph rig on Rock Creek, within walking distance of her house.
Photo by Phil Monahan

2. What’s your favorite water?
My favorite water is new water I am fishing for the first time, right after I land my first fish from it. At this point in my life, the adventure is the drug, as much as the tug.

3. What’s your favorite species to chase with a fly rod and why?
Favorite species? I dunno. I hooked a baby tarpon once while bonefishing in Belize. That fish is my constant daydream. I do not get to Belize (or anywhere tropical) enough to make it favorite, though. I love the brook trout of my youth, I love the rainbows and browns that dominate my “big fish” pictures, and I love the bull trout I catch in Rock Creek, no matter their size. Oh, and I love cutthroats too. My dog Beau (a great hunter and fisher dog) pointed the first large cutthroat I caught, in the Green River in Utah. It was his first fish point. The Green is so clear you can see the fish, which he did, and he became obsessed with fishing after that. So, “trout” would be the answer, I suppose.

4. What’s your most memorable fly-fishing moment?
One late-summer evening, after dinner, my live-in beau and I drove up to Second Connecticut Lake to fish below the dam. Occasionally large landlocked salmon are in the pool below the dam. After seeing a few larger fish leap into the whitewater shooting out of the dam, I decided to get closer. I crossed the river in front of my lover boy and start scaling the rock wall above the shoot of water. A concrete platform was my destination. My hands grasped protruding rocks and stalks of grass, while my feet dug into crevices. He hated that I did this but I was a young, hot-stuff, fearless fly-fishing guide—just 30 years old.

As I neared my destination, a rock I was gripping in my hand broke away from the wall. I remember staring at the rock with a weird curiosity mixed with fear for what seemed many minutes before I fell backward into the force of the water rushing from the dam. Under I went, dropping my fly rod, and then I felt the push of the water. It shot me downriver in a swirling confusion. The bottom drew up beneath me, and it was shallow. I struggled to my feet just as my lover swept me into his arms with a look of terror and relief on his face. Shaking, I pressed my face into his chest. But only for a moment. My fly rod! 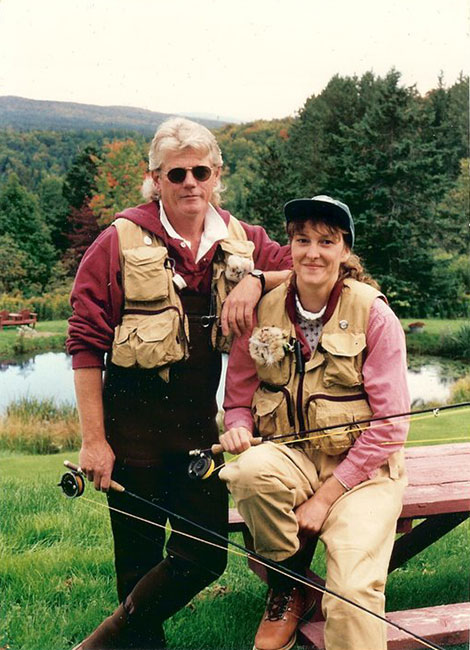 Lisa and her husband, Tim, back in the old days in the New Hampshire North Country.
Photo courtesy Lisa Savard

I broke from his grip and ran toward deep pool mumbling about the rod. I could hear him shouting something like “Forget the rod!” but I was determined. Scanning the water, I saw nothing but white foam. I glanced down, and there by my ankle was the butt of the rod swaying in the current. I reached under the water and grabbed it. Giving it a snap, I broke off the little caddisfly that had snagged on a rock. At this point, I thought about going back to fishing, but my legs were now spaghetti. We climbed to the Jeep where we sat, while I shook uncontrollably.

I had resisted answering Tim’s numerous marriage proposals for months, but on this night, I said “Yes” to one of my life’s better decisions.

5. What’s your most forgettable fly-fishing moment?
I had a tough trip ahead. I knew this because the client wanted to fish a pond for brook trout. She could only fish midday, and it was late July. We were probably going to catch nothing. Zero, zip. The kick in the butt is that the river was fishing “wicked good.” Knowing her chances of catching were nearly non-existent, she was determined, and off we went in my jon boat on a favorite trout pond.

I parked on a spring hole and began the day of fly changes and storytelling. After an hour or so of this, a garter snake pops out from underneath her seat and slithers under mine. The woman screams as the snake disappears under my seat. We make a plan to go to shore and remove the snake. I pull anchor, and before I can start rowing, the snakes it decides it likes it better under my client’s seat. The woman, seeing the snake coming back, began screaming and flailing around and hooked the one and only fish of the day. The boat was rocking, and I was trying to steady it as best I could. Finally, I yelled at her, “If you do not stop jumping around, the boat will tip over and it will be you, me, and the snake in the water. Do you want that?” 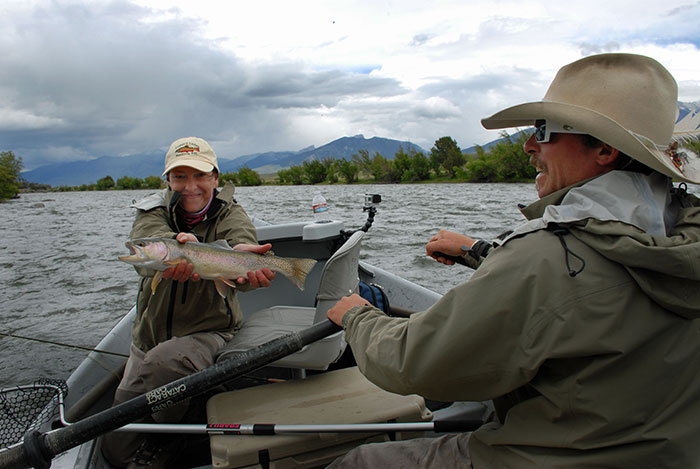 That got her to calm down. With terror in her eyes, she asked, “Is there any way that snake can come up behind me?” The jon boat had a front casting platform with two holes for a seat back. The seat back was not in today, and I could clearly see the two holes behind her. “No,” I told her, “There is no way the snake can come up behind you.” I released the near-dead brook trout and rowed us to shore. As I helped her out of the boat, she saw the two holes in the casting platform. “You f@#$ing asshole!” she exclaimed. She was a classy lady, so the language was a shock. “What was I going to do, tell you?” I asked. She fumed for a bit but then began to laugh. “No, I wouldn’t have told me either,” she admitted. Snake removed, we resumed our fishing on that hot July day and didn’t catch another thing.

7. What’s your favorite piece of gear and why?
I really love my Sport Tool nippers. Remember them from back in the day? They have the retractable needle. Fly-fishing gear comes and goes, and I’ve had a lot of it. My nippers on an old Simms, purple coil retractor is my old faithful. That combo has been with me for 25 years. 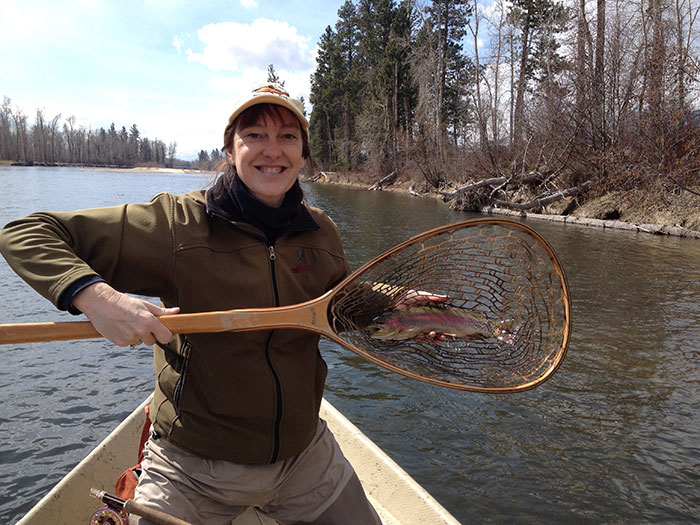 A pre-guide-rendezvous float on the Bitterroot produced this pretty rainbow last spring.
Photo by Phil Monahan

8. What’s your go-to fly when nothing else is working?
Dry: CDC Caddis with either an olive or dun body; Nymph: Beadhead Pheasant Tail; Streamer Olive or black Woolly Bugger. I caught my largest fish so far (salt or fresh), a monster rainbow in a tributary of the Flathead river in Montana, on a size 14 Beadhead Pheasant Tail Flashback.

9. What was your favorite fly-fishing trip?
My favorite fly fishing trip would be salmon-fishing trip to New Brunswick where Tim went from being just a friend to something more, but I won’t bore you with my love life. My love life and fishing life have been entangled for almost 20 years, so they’re hard to separate. My favorite trip would then be our first guided trip in Montana, when we fished the Bitterroot River with John Herzer of Blackfoot River Outfitters. It was a great trip and we caught lots of fish but what it really did was make us become Montana addicts. That was 1999. We went on to enjoy many more trips to Montana, many more trips with John and his awesome guides, and caught lots of fish. We bought a little cabin on Rock Creek in 2008 and in 2013 made Montana home.

10. How do you define the difference between someone who loves fly fishing and a true trout bum?
I am not sure I can say what makes someone a Trout Bum and someone “just” a fly fishing lover. I’d venture to say that a Trout Bum may make a living from fishing: guide, photographer, retailer, lodge, manufacture, writer. But they would need more than just the profession, they need an obsession. You know when you see a Trout Bum’s rig: rod holders, stickers, it’s dirty, and its usually parked at a fishing access. Sit in any airport in a fishing destination, and you can pick out the Trout Bums from the fly-fishing vacationers. The vacationers have on a clean, collared technical shirt that is undeniably new. They are hatless, with nice fishing luggage and move at a normal pace toward the rental car counter. The Trout Bum has on a sun-weathered hat, with a beat-up carry on and rod tube in hand. She/he moves through the airport with speed and determination so as not to burn daylight. It’s time to get on the river! 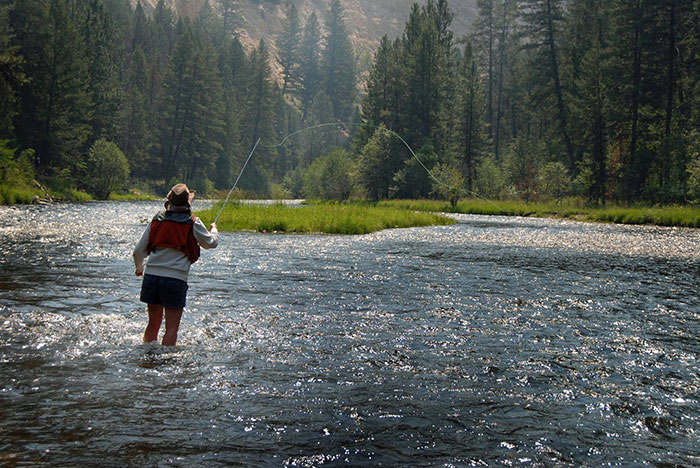 7 thoughts on “Trout Bum of the Week XXXIX: Lisa Savard”