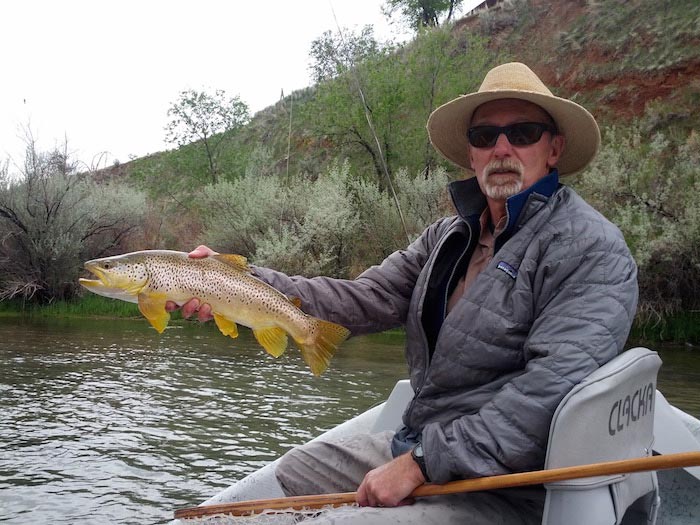 George Hunker was the recipient of the 2015 Orvis Lifetime Achievement Award was named the Orvis Endorsed Fly Fishing Guide of the Year for 2003. Along with his wife Paula, he started Sweetwater Fishing Expeditions in 1977, in Lander, Wyoming, and they have become the experts on fishing the backcountry of the Wind River Range. Previously, he was one of the first National Outdoor Leadership School Instructors to work his way up to Associate Director. He is known by his peers as a conservationist, philosopher and humorist. According to George, the goal of Sweetwater is simple: “To take people to beautiful places, where trout abound, and where simple camp life can cleanse our minds and bodies.” 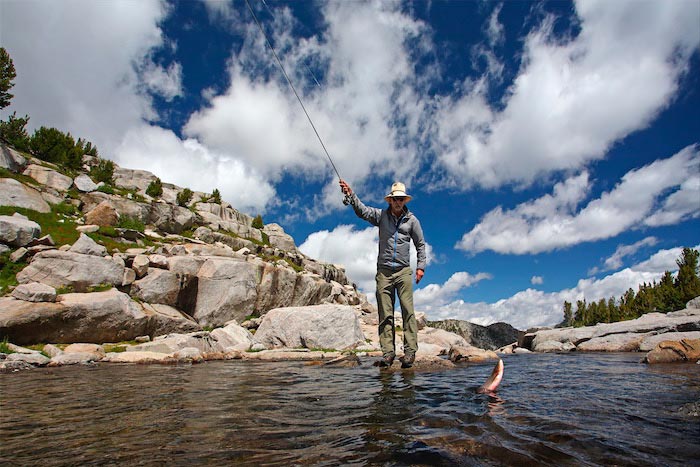 The backcountry of the Wind River Range is the subject of George’s special expertise.

1. When did you start fly fishing?
I started fly fishing when I was 8 or 9 years old. I grew up in the now famous town of Roswell, New Mexico, a long way from any fly fishing Mecca. My dad and uncle, however, had grown up in the northern part of the state, where my uncle had a cabin on a small mountain stream. I remember first fishing there with a long bamboo fly rod and a worm (the precursor to modern nymph fishing). But at some point I must have tried flies, probably dries. I know I was tying flies by age 10, ordering materials from Herters and Buz’s Fly Shop in Visalia, California. There weren’t many materials to choose from. This was the 50s. I remember catching tons of bluegills on farm ponds around Roswell and hearing some older guys wondering where I learned to cast. I was pretty much self-taught, via books and magazines. I remember digesting Field and Stream each month. I tried everything, including making my own fly floatant and tying my own leaders. Man was I addicted. I asked Santa for fly-tying stuff and flies from Buz’s.

2. What’s your favorite water?
Almost anything in New Zealand. Crystal clear and the size you can wade in the tails of the pools. Paula and I were newly married in 1976 when we spent five months there, and it has been a part of me ever since. I like to spot fish and try to have an encounter. I guess that’s why I like bonefishing too. 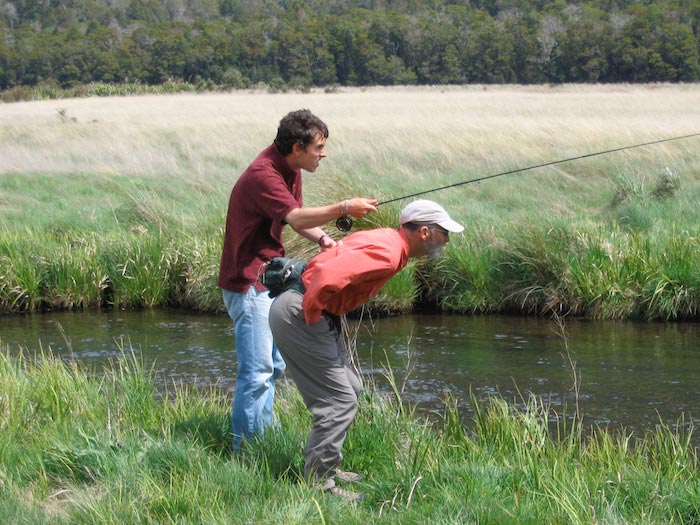 3. What’s your favorite species to chase with a fly rod?
Browns and rainbows. I like browns when they make that toilet-flushing swirl at your hopper or cicada. I like rainbows especially when they rocket off the bottom to hit your big dry in rough water in New Zealand.

4. What’s your most memorable fly fishing moment?
A fishing partner and I were tag-teaming a small river in New Zealand. Fishing had been good and we had had many “encounters,” not always translating to landed fish. It was one of those rare days. We climbed out of the water to go around a section too deep to wade, and then we looked back in too see a bunch of big NZ rainbows, including one that was far bigger than anything we had seen. It was sitting just below the drop-off of a particularly white sand step. My friend couldn’t even get his fly to the water from where we were standing. I tried and got my nymph into the water, but realized it wasn’t heavy enough. I took my friend’s rod, which had a heavier nymph on it, and dropped it in the same spot.

I could see the fly go over the white sand drop-off, and when I figured that the fly was about where the fish was (this is before strike indicators), I tightened a bit to check in. The fish was on and made a helluva ruckus in this deep pool. It became obvious, though, that he wasn’t going to get tangled or come unhooked, and we were going to have to find a place to land him. This was a problem because we were at least 12 feet above the level of the water. I spotted a root at the water’s edge and decided that we should try to land it there. I passed the rod around one tree to my friend, and then he passed it around the next to me. Eventually we got to the root at water level, slid the fish over, and got the fly out. No scale, no tape, no net. Who knows how big? The biggest. 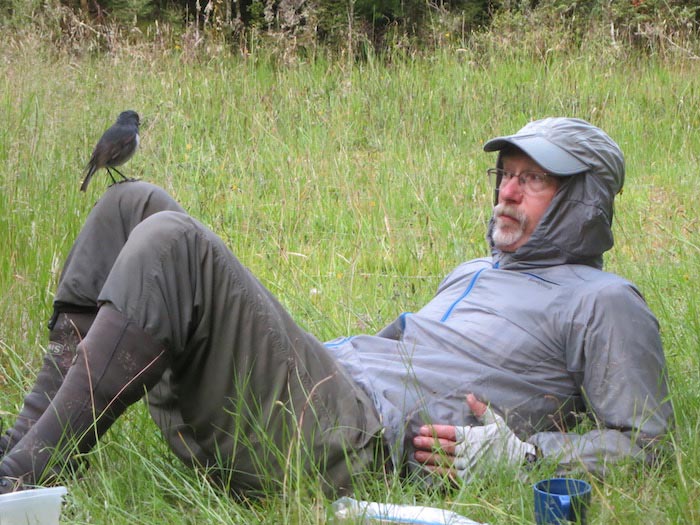 A committed conservationist, George prizes all aspects of the wilderness experience.

5. What’s your most forgettable fly fishing moment?
Trying to catch a 10-pound brown on a dry fly for the video camera and spooking the fish before the first cast even rolled out. . .by putting one foot in the water.

6. What do you love most about fly fishing?
I really like how excited people get and how completely removed they are from anything else. I even see this in myself after 50 years.

7. What is your favorite piece of gear?
I’m not really much of a gear snob, but I do really like my barb smashers. They really do a great and immediate job, much better than a hemostat. I also like nicely tied flies that stay together forever.

8. What’s your go-to fly when nothing else is working?
It would have to be a Stimulator or a Parachute Adams. 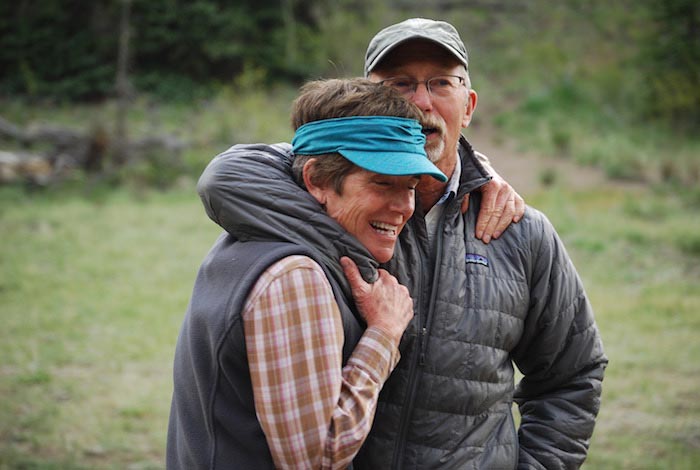 His wife, Paula, has been his fishing partner and fishing buddy since the mid ’70s.

9. What was your favorite fly fishing trip?
After 40 years going to New Zealand, I find it irresistible.

10. How do you define the difference between someone who loves fly fishing and a true trout bum?
Of course, a true trout bum would hardly ever have a real job and would lose any spouse due to the addiction. In my case, after 60 years of addiction, it means waking up in the morning when there is a misty rain in the fall and saying to myself, “Baetis.” I drop everything and go to the mythic stream where the huge browns rise to tiny dries . . .all day long.

3 thoughts on “Trout Bum of the Week LXXV: George Hunker”