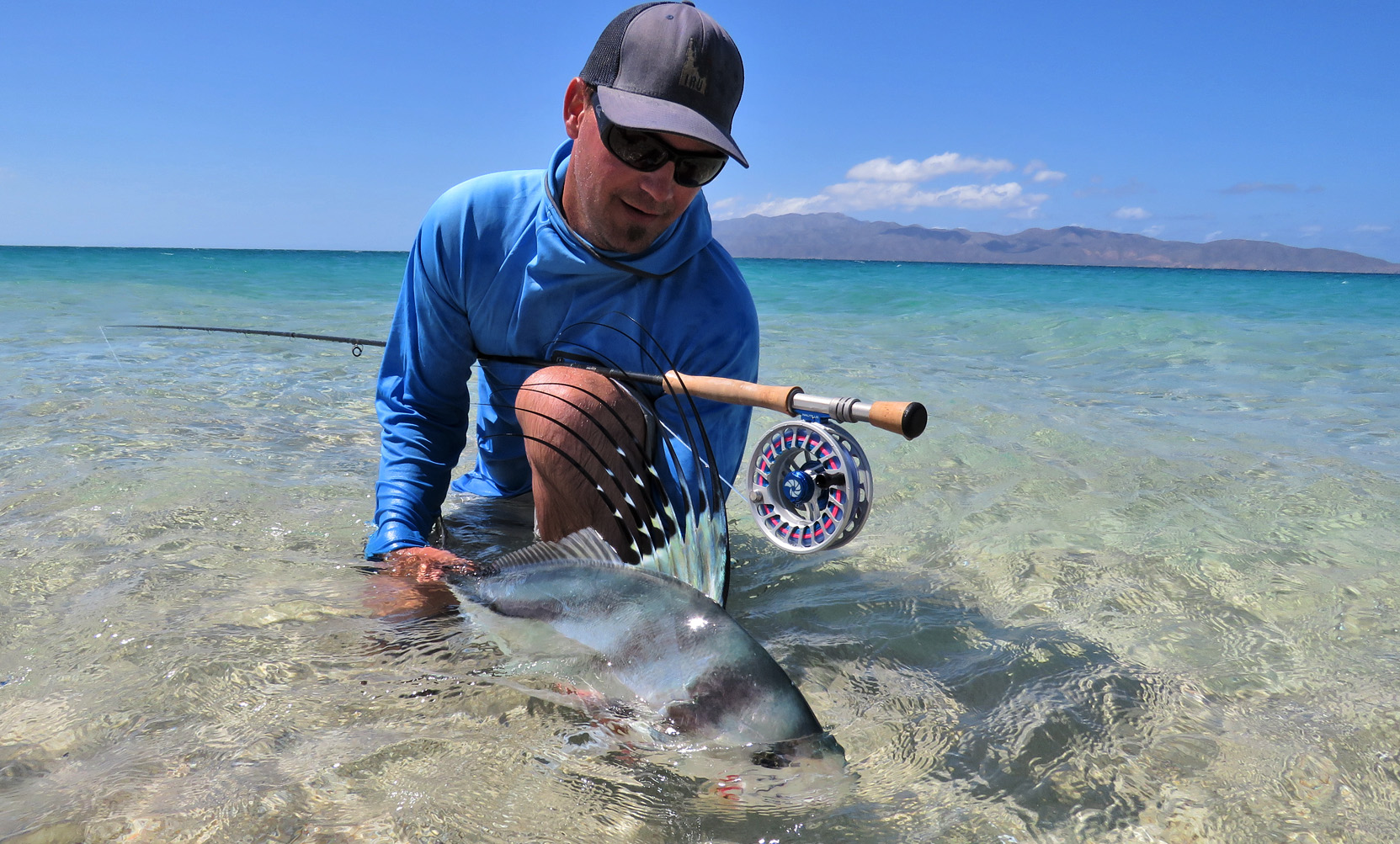 Bryan Huskey gets ready to release his most memorable fish ever. . .a roosterfish caught from the beach in Mexico.
Photo by Paul Moinester

Bryan Huskey is a filmmaker and photographer from Boise, Idaho. He’s probably best known in the fly-fishing world for his film “Doc of the Drakes,” about an octogenarian angler suffering from Parkinson’s Disease and the fly-fishing guide who helps him fish the brown-drake hatch on Silver Creek. He is also the founder of #Keepemwet Fishing, which promotes good fish handling during the photography process after a fish is landed. 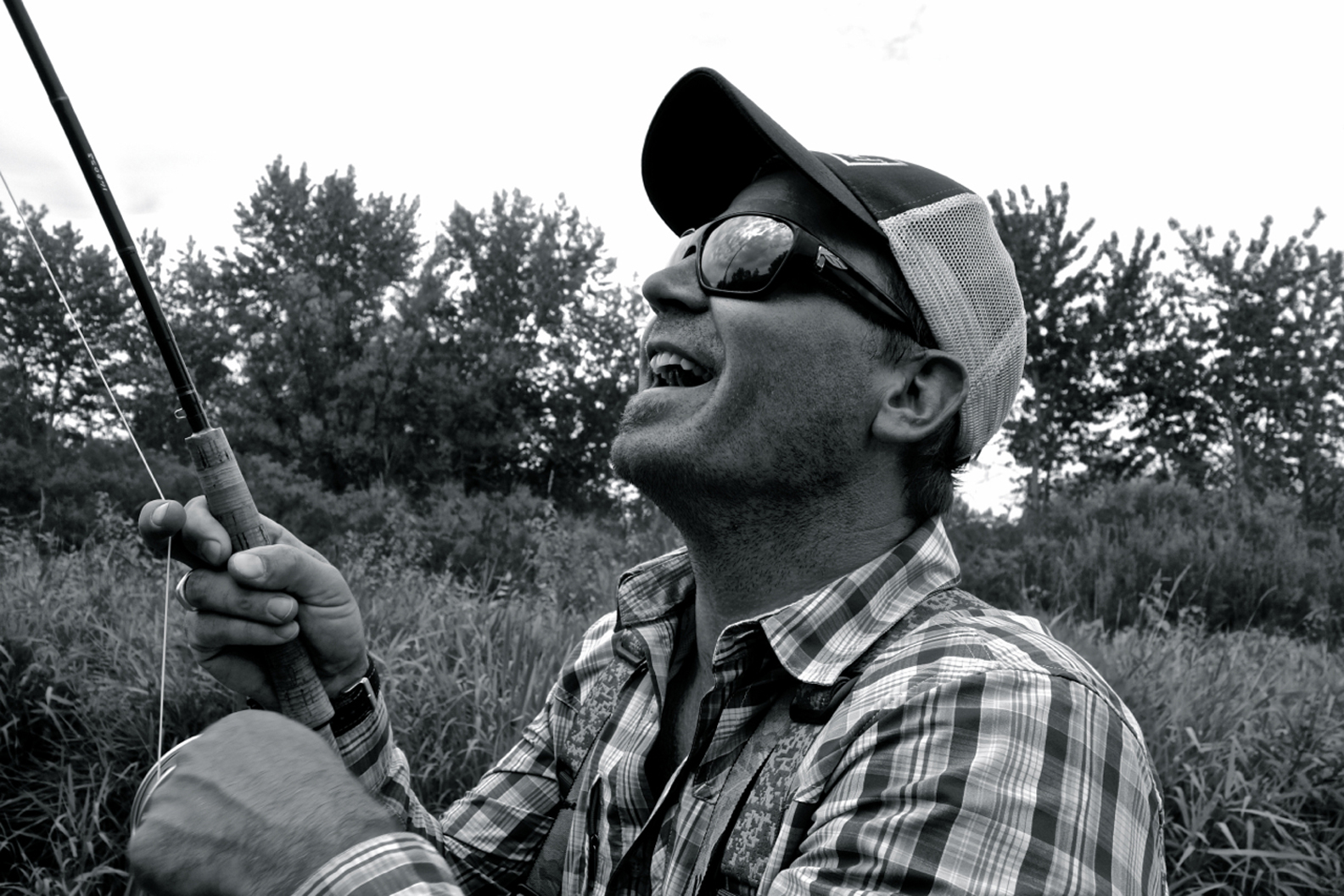 1. When did you start fly fishing?
I started tying flies to my line as a kiddoin the mid 80s with my father. We typically fished spinning rods, but when the trout of various central Oregon waters began to rise, we’d add a castable bobber, tippet, and dry fly to our rigs. Over time, our cheap spin/cast-combo rods carried fly reels and line more often. After high school, I fell into the crowd of Deschutes fishing guides, and proper fly fishing became a sincere pursuit.

2. What’s your favorite water?
My favorite water is likely a run or glide of a mid-size river—not so large that it can’t be crossed about half of its reach, but large enough to command respect and keep much of its treasure hidden. The run would begin with a choppy riffle at its top, with a chute carrying a row of waves just large enough to tip over and create a mellow sound. Those waves would flatten into a boulder-strewn run, just deep enough to blur exactly what the bottom holds. Soft seams on either side extend beneath overhanging trees, creating plenty of shade and cover for fish to feed or just hold. A glassy tailout graces the bottom of the run, where more boulders would create various pillows and a marbled surface. Another person, boat, or vehicle could not be found. That’s my favorite water, wherever it may exist. 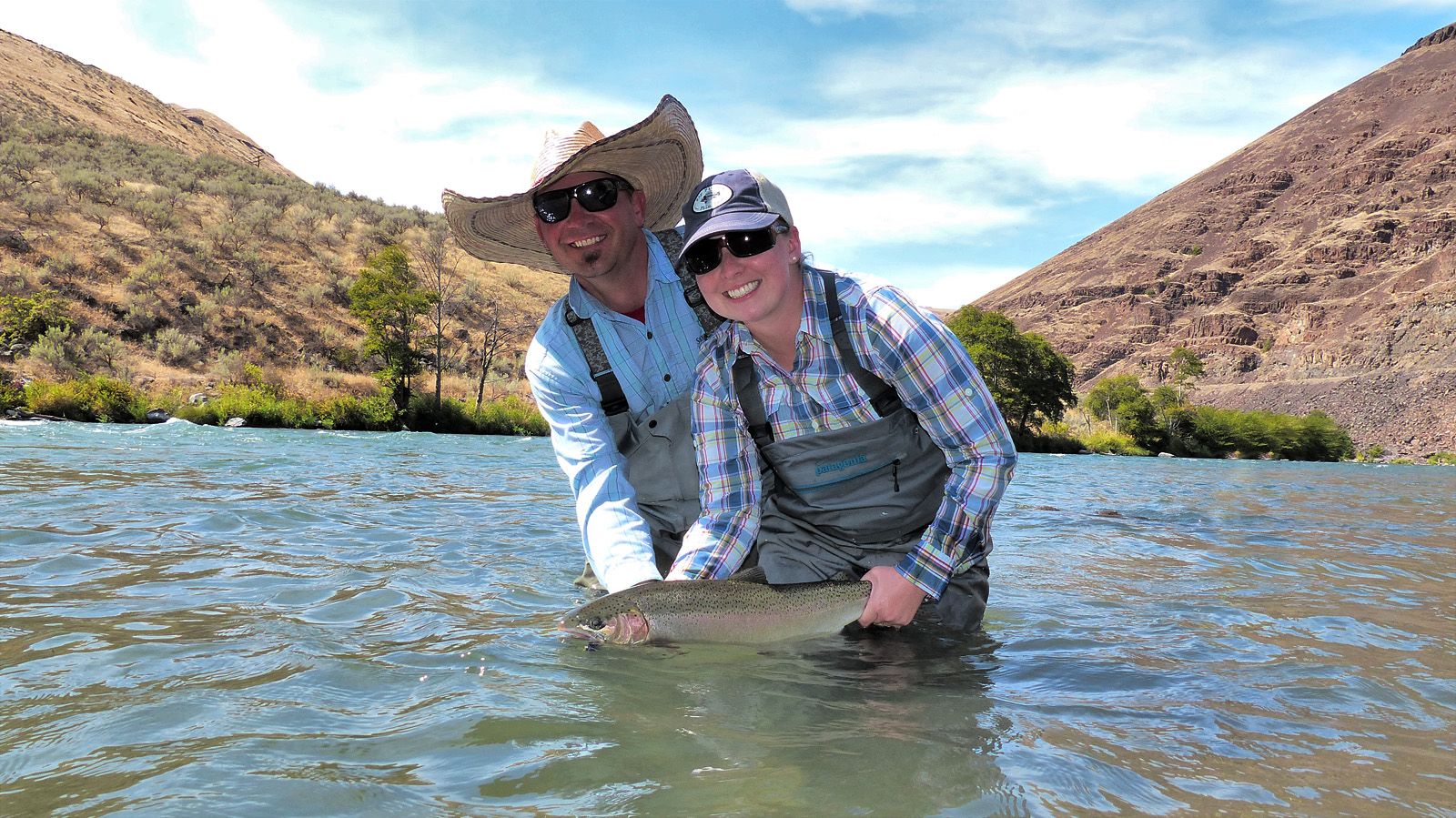 Chasing steelhead on the fly is Bryan’s favorite game.
Photo by Adam Haarberg

3. What’s your favorite species to chase with a fly rod?
My favorite fish is the steelhead, simply because of the incredible range of size one may encounter. The fish that climbs onto my fly may be 20 inches, or it may be 20 pounds!

4. What’s your most memorable fly fishing moment?
Hands down the most memorable moment in fly fishing for me is the roosterfish I caught last year in Baja. No boat, no guide, no ATV, no live bait, no teaser rod, and no slam dunk! It was many years of trying to get a good one this way, and to top it off, my wife Ali and great friend Paul Moinester were there to revel in my success and capture incredible images of such joy.

5. What’s your most forgettable fly fishing moment?
Also just last year, I lost a trout that appeared to far exceed the size of any I’ve ever landed. I played the fish for over ten minutes, pointing the butt of my 4-weight rod at it, knowing the strong tippet tide to my streamer could handle anything this fish could give. Well-hooked and clearly secured after such a long duration, I eventually tugged the fish to the surface to clarify if it was just a large fish foul-hooked. I couldn’t believe my eyes when I got a look at the fly clearly tight to the front of its mouth, and began shaking at the prospect of seeing a fish of this size in front of me. A minute or so later. . .pop! Like it just let go, my line went limp, and the fly drifted back to me unscathed, as if nothing had happened. My shoulders drooped, and I sat on the bank alone with my head in my hands, repeating “No. no. no. no. . . .”

It doesn’t matter if it’s a single-handed or two-handrod: the man just digs casting.
Photo by Adam Haarberg

6. What do you love most about fly fishing?
Casting! I absolutely love fly casting! Two-handed, single-handed, Spey techniques with single handers—it’a all so much fun! Fly casting creates incredible opportunity for satisfaction and reward no matter what’s going on with the fishing.

7. What is your favorite piece of gear?
My favorite pieces of gear have always been my long-handled nets. Over the years, I’ve had many, but I’ve come to identify what works best and why they’re so important and fun! I like to fight fish very aggressively, land ’em fast or lose ’em trying. The netting process is a thrilling challenge in itself, and quite honestly I feel it’s something that quickly reveals an anglers skill and experience. The faster anglers can land a fish, the less the impact on the fish from exhaustion, and for fish that we’re releasing this is a big deal. Playing a fish hard, reading and using the currents and momentum to net a fish fast is a thing of beauty. The net is then such a crucial part of keeping that fish in the water (yes #keepemwet!) during un-hooking, photos, revival, and release.

8. What’s your go-to fly when nothing else is working?
I’ve never been a “match the hatch” angler. Over the years, I’ve had more fun experimenting, rather than doing it “right.” I always figured it’s more important to know what the fish will eat, as opposed to what they fish are eating. With that approach, I like to fish big foam terrestrials or streamers, regardless of what insects are hatching! 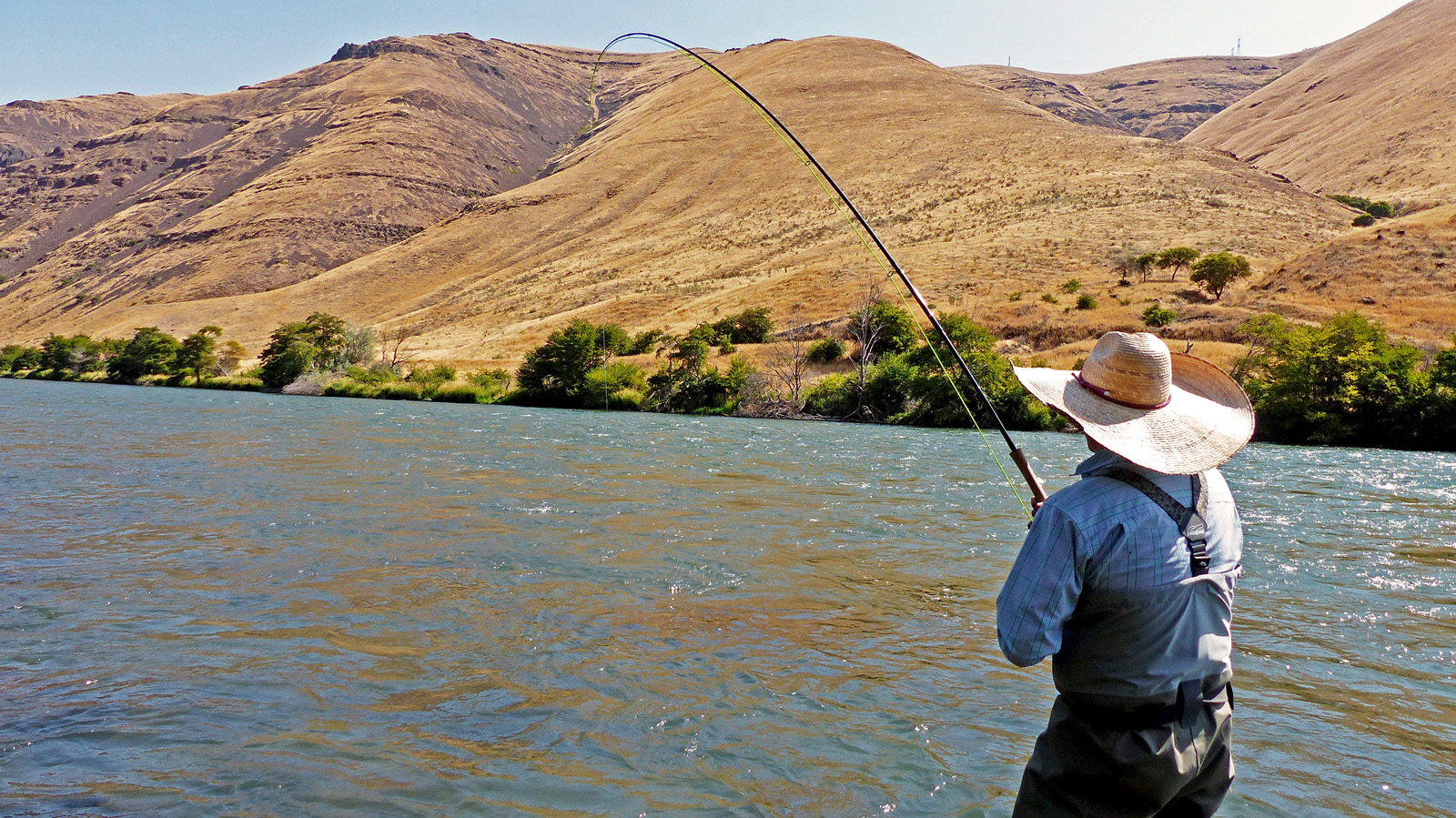 Bryan fights a steelhead on the Deschutes River near Lockit Camp.
Photo by Cory Godell

9. What was your favorite fly fishing trip?
New Zealand. C’mon it’s nothing short of a magical imaginary happy thoughts dreamland down there!

10. How do you define the difference between someone who loves fly fishing and a true trout bum?
I suppose the definition of a trout bum would be someone whose life has suffered in the categories by which society measures success because of the pursuit of silly little fish. “I don’t think I’ll make it to class again this week because the weather is bound to turn, and when it does I just know the fishing is going to be incredible!”

One thought on “Trout Bum of the Week LXXVI: Bryan Huskey”