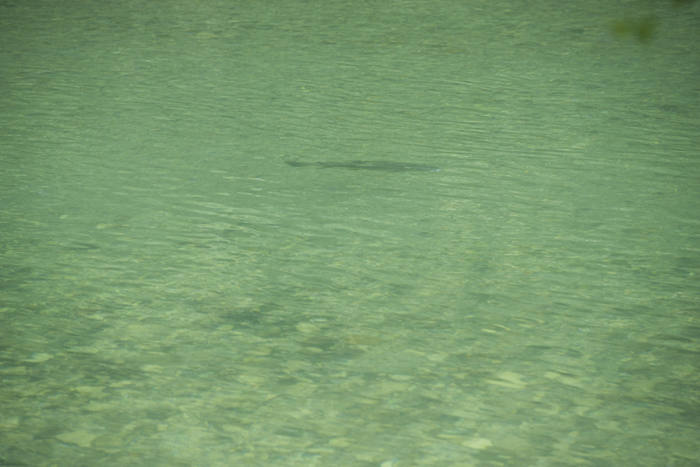 [Editor’s note: When I was the editor of American Angler, I had the pleasure of working with William G. Tapply for ten years before his death in the summer of 2009. Bill’s wife, the author Vicki Stiefel, has graciously allowed me to reprint some of his columns and articles here. So, once a month, I post a piece of Bill’s outdoors wisdom or angling know-how. If you are not familiar with Bill’s work, I encourage you to check out his website and the links below.]

The Bull Shoals dam was holding back water, and the White River was running low and slow and clear. Local trout maestro Wayne Reed had led John Barr and me through some woods to a classic nymph run where a long glassy pool narrowed and spilled through a cluster of boulders. Wayne put me at the head of the run, and I immediately began catching ten-to-fourteen-inch rainbows, drifting a Pheasant Tail and a Copper John. For an hour or so my strike indicator kept twitching and dipping, and I was content.

Then, typically, I got itchy. Overhead the Arkansas sun blazed high and bright in a cloudless sky, and upstream the slow flat pool began whispering “sight fishing” and “big fish” into my ear. Seductive, irresistible words.

Downstream, Wayne and John were laughing about something. I didn’t want to hurt Wayne’s feelings. He had, after all, brought us here and set me up on this hot hole. But I wanted to go hunting.

I reeled up, tugged at the visor of my cap, and began creeping along the edge of the pool.
It took a few minutes for my eyes to see and my brain to interpret what they were seeing, but pretty soon I began spotting trout in the shallow water along the inside bend of the pool. Rarely could I make out an entire fish. Mostly it was a slash of crimson, or the horizontal line of a trout’s back, or the angle of a caudal fin, or the sideways dart of a head, or the wink of a white mouth, or a shadow on the rocky bottom.

But all I saw were small fish like I’d been catching on nymphs. I’d done that. The White was famous for its giant rainbows and browns. I wanted one of them.

I lost track of time as I focused hard and expectantly on every square foot of water, stalking like a heron one slow step at a time. When I finally paused, straightened my back, and glanced behind me, I saw that I’d moved several hundred yards. I’d reached the head of the pool, where the current pushed against a ledge, then curled and spilled between two large boulders.

I looked so hard it felt as if my eyes were going to pop out, and after a few minutes I saw what I’d been hunting for. It was holding near the bottom in the cushion behind the nearest boulder: A large, greenish, ghostly shape. A trout. A big trout.

It was a tricky lie, the kind of sight-fishing challenge I love. The eddy behind the boulder wanted to drag my nymphs away before they sank to the trout’s depth. I tried drifting them right along the edge of the current seam, hoping that the fish would dart out to grab one of them. But it didn’t. I tried dropping them in the soft cushion right against the boulder with a lot of slack line, but some hidden current would suck them out into the quick water. I moved upstream, reached over the boulder with my rod, and let my nymphs slide down the other side. I added weight, changed flies.

In the swirling eddy I sometimes lost sight of the fish, but when I shifted my position and got the angle of the sun just right, I spotted it again. All my efforts hadn’t spooked it. It was holding right where I’d first seen it.

Maybe it just wasn’t in an eating mood. Or maybe it was eating something that I wasn’t imitating. Most likely I just wasn’t getting my flies to it so that they looked natural and good to eat.

I reeled up and found a rock to sit on while I pondered the situation. Maybe I’d catch that fish and maybe I wouldn’t. But I wasn’t about to give up.

A few minutes later Wayne came along. “How’s it going?”

“I’m having fun.” I pointed with my rod tip. “There’s a really big trout behind that boulder, and I can’t catch it. You can’t beat that for fun.”

I nodded. “Why don’t you try for that fish.”

I got up and looked. The trout hadn’t moved. I pointed. “Right there. See it?”

He shifted his position, tugged at the brim of his hat, adjusted his sunglasses. “Hm. No . . . Wait a minute. Okay. Yeah. I think I see what you see.”

Colorado guide Sandy Moore introduced me to the mesmerizing intensity of sight-fishing for trout one October morning almost 20 years ago. I haven’t been the same since.

We were fishing the Frying Pan, hoping to tie into one of that river’s famously piggy rainbows. I was high-sticking a mysis shrimp imitation through a deep slot and having no luck at it when Sandy came along. He watched me for a few minutes, then pointed and said, “Look. There you go. See it?”

I looked where he was pointing. “What?” I said. “I don’t see anything.”

He blew out a breath. “Right there. Look, man.”

I shrugged. “I am looking. Sorry.”

“Here.” He took off his sunglasses and handed them to me. “Try these.”

I took off my glasses and put his on. Suddenly I could distinguish every pebble on the stream bottom. “My glasses are polarized,” I said. “What’s with these?”

“Awesome. I don’t see any fish, though.”

He sighed. “See that square boulder? Look two feet upstream and then one foot to the left. Just behind that rock with the white on it. Nice fish.”

I looked hard, and suddenly I saw it. First I saw a crimson slash. Then the shape of its head materialized. Then the curve of its belly, then its wavering tail. A big fat rainbow.

“Now that I see it,” I said to Sandy, “I don’t understand how I couldn’t see it before. It’s obvious.”

“You’ve got to find your trout eyes,” he said. “Like bonefishing. It takes a day or two on the flats before what the guides call your bonefish eyes kick in. You need the glasses for vision. Polarized for the glare, amber for the contrast. And it’s ideal if you have an overhead sun and you can climb a bank or a rock and look down into the water, and it helps if the surface is smooth. Even so, just being able to see isn’t enough. Your brain has to recognize a trout, to understand what it is your eyes are seeing. You hardly ever see a whole fish. You look for a line or a color or a shadow or a movement. Some little anomaly that isn’t a rock or a stick. After you’ve done that a few times, those little trout clues get filed away in your brain. Okay, so now that you see it, go catch that fish.”

I adjusted my position and drifted my shrimp imitation onto the trout’s nose. It was intense, knowing that my fly was approaching a large trout, anticipating the take, then feeling the let-down when the fly drifted past.

On the fourth or fifth cast I saw its head dart to the side. Instinctively I lifted my rod and felt its weight, and a few minutes later Sandy netted a nineteen-inch rainbow trout that was shaped like a watermelon.

I patted my chest and blew out a breath. “I thought I was gonna have a heart attack,” I said. “I swear that was the most fun I’ve ever had catching a trout.”

For my remaining days on the Frying Pan I cast only to specific fish that I had located. I spent a lot more time stalking along the banks looking into the water—hunting—than I did actually fishing. The harder I hunted, the more fish I began to see. Locating one of those anomalies that translated to “trout,” estimating its size, watching the way it was feeding, planning a strategy, creeping into position, and then drifting a fly to an actual specific fish was an entirely new and utterly absorbing form of fishing.

Nothing, of course, is fool-proof. I’ve encountered many conditions and water types where sight fishing was impossible. Sometimes my trout eyes and my brain don’t communicate clearly.

Sometimes I just can’t see the trout I know are there.

And sometimes I see trout that aren’t there.

Wayne peered into the water, then shook his head. “I can’t catch that trout.”

I looked again, and after a minute I saw it. My trout was a green-backed fish-shaped weed. It had a tail and a head and, I’d swear, gills and a dorsal fin. But, okay, it was a weed.

I shrugged. “Wishful thinking, I guess. No wonder I couldn’t catch it.”

“So,” said Wayne, “how much time did you waste, trying to catch that big old weed?”

“Waste?” I said. “I didn’t waste a second. I was having a wonderful time trying to catch that weed before you came along and spoiled it.”

And visit Vicki Stiefel’s website and facebook page to learn about her newest book and series, Altered, Book 1 The Made Ones Saga.