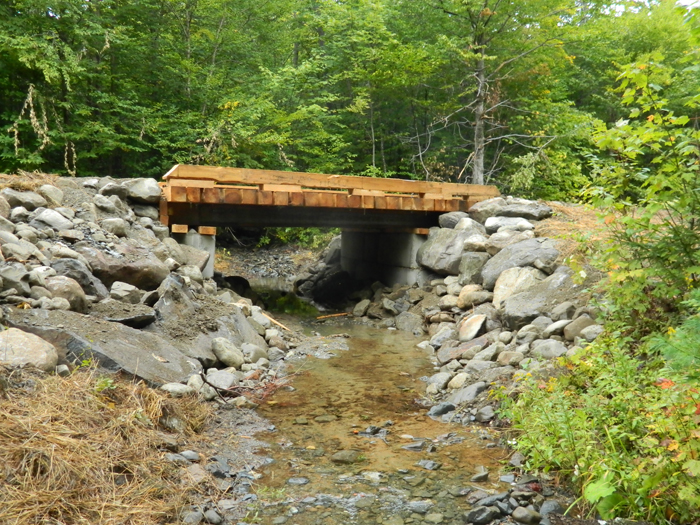 The West Branch of the Pleasant River flows east from the crest of the Appalachian Trail in north-central Maine. A tributary to the Penobscot River, its lower reaches (below waterfalls in a spectacular gorge called Gulf Hagas) provide some of the best habitat for Atlantic salmon in Maine. Both above and below Gulf Hagas, the West Branch Pleasant and its tributaries support wild populations of native brook trout. The Appalachian Mountain Club owns and manages over 60,000 acres of northern forest that is managed for recreation, conservation, and sustainable forestry. See Map. Most of the West Branch Pleasant headwaters are on this property, which is protected by a conservation easement that provides public access and prevents future development.

The Big Picture
When AMC acquired these properties, they inherited a network of gravel forest roads with multiple stream crossings. Over the past several years, AMC and multiple partners have undertaken a comprehensive effort to reduce the impacts of this road network by retiring unneeded roads and upgrading roads that will remain open. The goal is to allow unobstructed passage for trout, salmon and other aquatic organisms throughout the watershed.

In 2013, with funding from USDA/NRCS and Orvis, AMC replaced four impassable crossings around Indian Pond and Lucia Pond. All of these sites are on tributaries to Houston Brook, which flows into the West Branch Pleasant River below Gulf Hagas.

Houston Brook at Lucia Pond Outlet
Houston Brook forms as the outlet of Lucia Pond, then flows through Sampson, Indian, Dam, Houston and several smaller ponds before entering the West Branch Pleasant River. A road over the outlet of Lucia Pond passed over an undersized culvert that has been blocked by beavers. This obstructs fish passage and forces high flows over the road surface. Large amounts of road material have been washed downstream into Houston Brook below the road.
The culvert was removed and replaced with a channel-spanning bridge to provide passage for brook trout and other aquatic organisms. Obvious fill was removed from the channel, which was restored to near-natural contours. Natural surface and subsurface drainage patterns were restored and erosion from the road surface reduced.

Find out how you can help Orvis and TU restore more streams at the Orvis/TU 1,000 Miles Campaign.