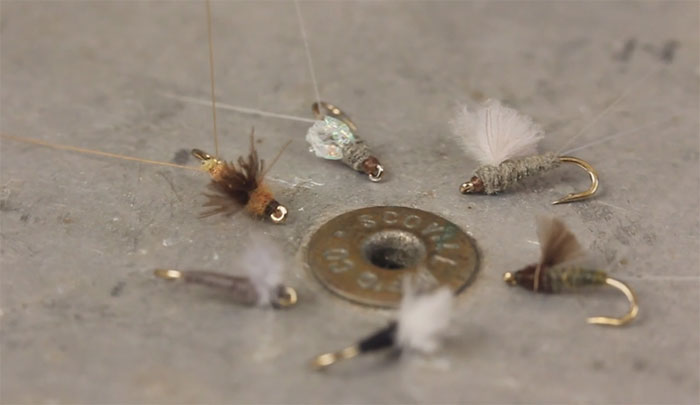 Small flies have small hooks, which can make it harder to connect with fish.
Image courtesy Tightline Productions

In winter, most anglers fish some of the smallest patterns of the year: midges, tiny olives, and downsized nymphs. A small fly must be tied on a small hook, which often means you lose more fish right off the bar because you don’t get a good hook set. You’ll also have a lower hook-up rate than you would with a size 12 fly, but here are a few things you can do to swing the odds a bit more in your favor.

1. Use a hook with a wide gap and a straight eye. The small gap on some hooks means that the body materials can get in the way. If the hook point never gets to the fish’s mouth, your chances of success are near zero. When you’re choosing hooks for patterns smaller than size 16, and especially for those 22s and 24s, consider the gap size. The straight eye also clears the gap even further.

2. Use a slightly longer hook shank. If you’re using tiny Soft Hackles or wet flies, try a hook with a longer shank to ensure that the hook point is unimpeded. (As you’ll see in the comments, some anglers like to offset the hook point slightly; others think that bending the small wire weakens it. Your call.)

3. Tie sparse flies. Given numbers 1 and 2 above, it makes sense to tie patterns that have slim bodies and not a lot of hackle or other winging material interfering with the hook point.

4. Fish upstream as much as possible. When you’re using such a small hook, it’s very easy to yank it out of a fish’s mouth if the fish is downstream of you. For dries and nymphs, fish upstream. For wet flies, try to drift and swing the fly at as sharp an angle as possible, so you’re not pulling the fly directly away from the fish.

5. Set the hook to the side or downstream. To help with the problem described in #4, think about the direction of your hook set. Instead of throwing your rod tip to the sky when you get a hit, keep it low and sweep the tip to your downstream side, if possible. They, of course, is to do this as gently as possible, since you’re probably using 6X or smaller and you don’t want to pull the fly out of the fish.