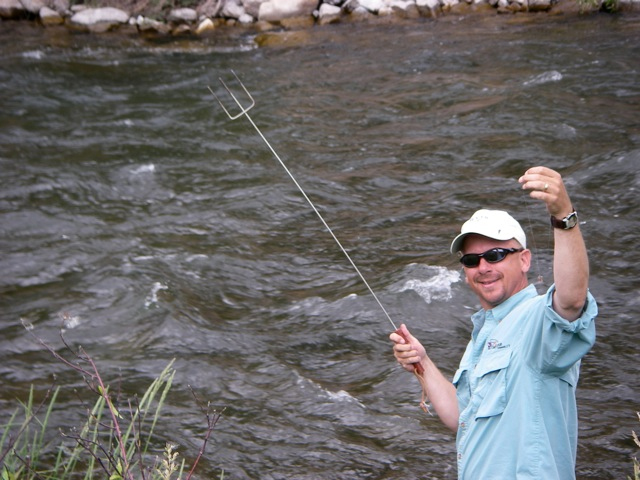 You don’t want to forget your rod and end up like this guy, fishing with a hot dog fork (story here).
Photo by Bryan Eldredge

The first time, I took along the correct rods, but wrong reels and lines. Real smart, I know. Yes, I fished, but felt like a complete dope the entire day.

The second time, I arrived at my fishing destination—far, far away from any supply shop—and discovered that I didn’t have a single tippet spool with me. In full panic mode, I rushed to see if I had left anything on one of the two the reels I brought and. . .yes! . . .there was a bright, shining leader on one of them: almost seven-and-a-half feet of what was originally a ten-footer. I fished that day, knowing full well that I wouldn’t be changing my fly anywhere near as often as I’d have liked to (four or five changes, total). By day’s end, I was fishing a pitiful six-footer that could barely fit any but the largest hook eyes. I caught a few fish, but it was a very frustrating day.

Lesson learned: forgetting even small items, such as leaders, can really mess up your day.

Some people just take everything with them all of the time and never have anything missing, something I’m not entirely opposed to, except that I fit in the middle-of-the-road category of anglers, when it comes to gear. I’m not a minimalist, but I try hard to lighten the load of my vest or pack; my personal limit is 36 ounces (1,000 grams). So I took three minutes to type out a checklist that I now take one minute to review every time I leave the house. It’s sixty seconds well invested. Believe me now, or believe me later…

Some items are optional or do not apply, but they’re all there – whether you’re boating or wading.

And don’t forget to check your vest/pack supplies regularly: pulling that last 9.25 inches of tippet from a spool is frustrating. No – scratch that – make that infuriating.

Robert Morselli is the research director for the television show “How It’s Made.” He is also publisher of Fly Gear Guide.

9 thoughts on “Pro Tips: A Good Checklist Can Protect You from Your Own Stupidity”