Streamers are fantastic fall patterns, especially for catching big trout, but it’s worth remembering that there are many ways to fish them. Although most anglers strip or swing these patterns, they can also be deadly when fished on a dead drift. As Tom and Molly Semenik show in the video above, trout will often jump on what they see as an easy meal.

One great streamer tactic is dead-drifting a streamer along a bank so that its profile is perpendicular to current. This strategy works great wherever there is very roily water or a sharp drop-off, as well. One time on Wyoming’s Encampment Creek, there was a spot where a fast, shallow riffle dropped off sharply into a deep, slow pool, and I took a nice brown trout by dead-drifting a streamer over the lip as if it were an injured baitfish floating down from the pool above. The fish was lurking just below the lip, and it took as the fly began sinking to the bottom of the pool. 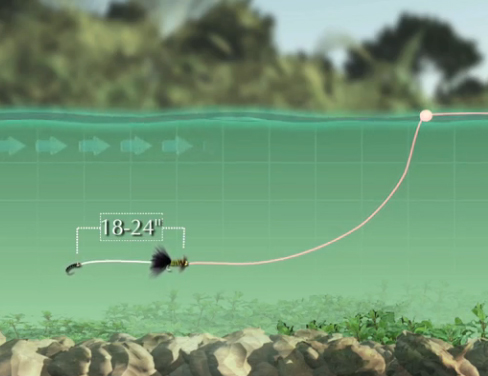 Fishing a tandem rig with a streamer and a nymph can be very effective.
photo courtesy the Orvis Learning Center

When you are dead-drifting a streamer, use your line to control the fly, as you would when fishing a nymph. A high-sticking technique works great when you want to float the streamer along a cut bank or through a deep slot between two boulders. The advantage of a streamer in these situations is that the take is not subtle. When a trout attacks a baitfish, it almost always does so aggressively—no strike indicator necessary.

Using a streamer to imitate a stunned baitfish that has just been washed over a waterfall or through the turbines of a dam is among the simplest fly-fishing presentations. All you have to do is cast the streamer into the boiling water at the base of the waterfall or dam, give the fly enough slack that it can be bounced around by the wild and competing currents, and then hold on. The trout have figured out that the trip over the falls or through the dam’s turbine’s leaves the baitfish injured or just temporarily paralyzed, which makes for easy pickings. Don’t worry about missing the strike; the fish usually takes up all that slack in the first seconds of the fight. I’ve had great success with this lazy-man’s strategy at Middle Dam on Maine’s Rapid River and at the Fife Brook Dam on the Deerfield in Massachusetts.