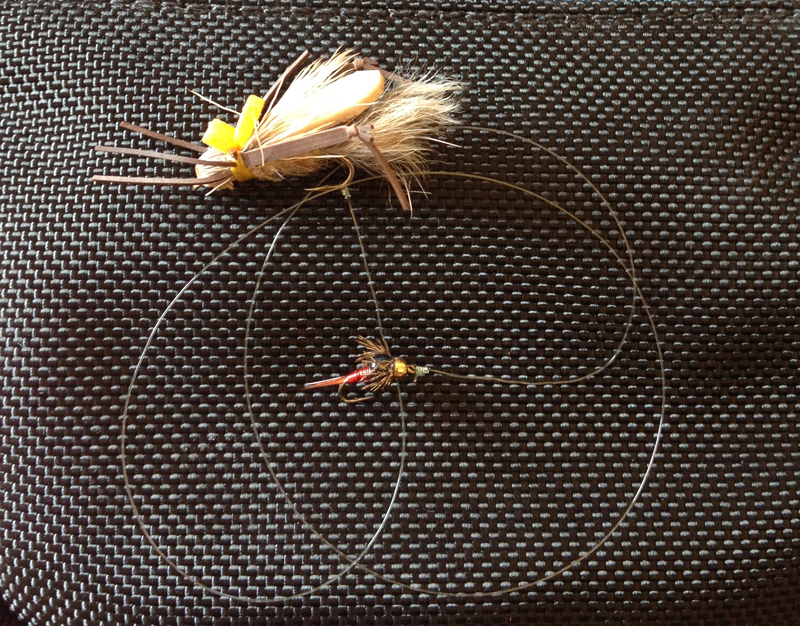 The classic “hopper-dropper” is but one option for fishing two flies in tandem.
Photo by Phil Monahan

Fishing with two flies is way more commonplace now than it was when I first discovered the technique in the mid 1990s on Montana’s DePuy Spring Creek. However, it’s important that there’s more to tandem rigs than the Hopper-Dropper setup. Here is a bunch of ways that you can double your pleasure and increase your catch rate. Some are easier to cast and fish than others, but all of these rigs will help you figure out what’s working faster than you could with just a single pattern.

Two Dry Flies
When fish are feeding on very small flies, it can be difficult to see your tiny imitation on the water. In such situations, tie on a big, bushy fly, and then add the smaller fly on a 24- to 30-inch dropper. That way, the big fly serves as a locator and a strike indicator — when a fish hits the size 22 fly, the big ol’ size 10 fly will disappear, too. If you know exactly which flies the fish are hitting, you can simply tie on two of the same pattern, thus doubling your chances of a strike. The two-fly rig also helps when you’re trying to figure out which patterns work. You can test-cast twice as many patterns this way.

Dry Fly and Emerger
Oftentimes, when insects are hatching, fish will key on a particular stage of the hatch cycle. If you’re not sure whether you should be casting a dun or an emerger, fish both, and see which one works. I suspect that, even when they are eating duns, some trout can’t pass up a crippled-looking emerger. It’s easy pickings for them. I like emerger patterns that feature a Z-Lon or Antron shuck.

Attractor Dry Fly and Nymph
When you have no idea what the fish are eating and you want to cover a lot of water, you can’t beat this setup, which is a favorite among drift-boat guides. Use an large attractor-pattern dry fly, with a real generalist nymph — such as a Bead-Head Hare’s Ear Nymph or a Bitch Creek — as a dropper. (The length of the dropper should be determined by water depth and current speed.) The theory behind this rig is that you’re going to present each fish with two options. The dry fly acts as a strike-indicator for the nymph, and the beauty of this system is that it allows you to fish the nymph at a very specific depth. If you get consistent hits on the nymph, you may consider switching to the next option….

Two Nymphs
The double-nymph rig is based on the same theory as the double-dry, and it also helps you to control the depth of the flies. If you know that the fish want something diminutive, such as a size 18 Pheasant Tail, right on the bottom, instead of loading up the line with split-shot, drop the PT from a heavily weighted fly. It’s much easier to cast, and there’s always the chance that some lunker will find your larger offering attractive.

Streamer and Nymph
This is the least common tandem rig, but I’ve used it a lot, especially in still water. When I worked in Montana, my favorite set up was an Olive Woolly Bugger, with an olive, jointed damselfly imitation as a dropper. I found that the larger fly would often get the fish interested, and when the nymph came swimming by, they’d jump on it. I’ve also had good luck dead-­drifting a Black Ghost and a large Kaufmann’s Stonefly during the early, high-water season in the Northeast.

A more unusual combination is a streamer dropped off a nymph. The rig is designed to look like a baitfish chasing an ascending nymph. Large browns feed almost exclusively on other fish, and the theory here is that the big ‘ol brownie will ignore the nymph and pounce on the baitfish pattern in “pursuit.”

Three Flies
Many of the European fly fishermen who regularly win the World Championship use rigs with three flies. I’ve never really felt the need to try it, but I’m sure it works. The only problem I see is that your leader ends up being really long, which might cause some casting problems.

9 thoughts on “Pro Tips: How to Expand Your Arsenal of Tandem Rigs”