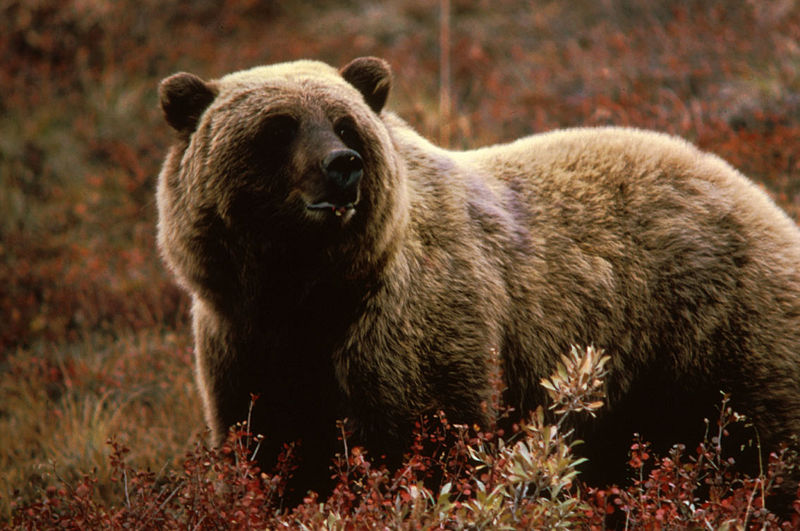 You’d be surprised how effective bear spray has proven to be over the past couple of decades.
Photo via Wikipedia

This time of year, many anglers and wilderness lovers are planning trips into the backcountry, oftentimes in places where there are wild bears. In the vast majority of situations, humans and bears coexist peacefully in the wild, and tens of thousands of encounters occur without incident every year. But when bears do become aggressive, you’ve got to react quickly to protect yourself. The best way to do this is to carry a can of bear-deterrent, which sprays concentrated capsaicinoids—the stuff that makes hot peppers hot—to cause irritation in the bear’s eyes, nose, and throat.

Not sure if bear spray really works? In July 2010, famed zookeeper Jack Hanna effectively used pepper spray to drive off a young male grizzly that threatened Hanna and several others huddled on a narrow ledge in Glacier National Park. That same weekend, pepper spray was used by two other hiking parties, a Student Conservation Corps worker, and a park ranger. In all cases, which involved both grizzlies and black bears, the spray proved to be 100% effective, and no one was injured.

I’ve always used pepper spray,” Hanna told a reporter at the time. “You don’t need it for years, but when you need it you really need it.”

Spray vs. Guns
When most people think of protection from bears, they think gun…big gun. In fact, I carried a Winchester Model 1300 throughout my career as a guide in Alaska. But relying on a gun poses several problems, not the least of which is that it is quite difficult to fire accurately at an animal that is charging you—especially if the encounter happens quickly and unexpectedly, as it usually does. Unless the user is extremely proficient with a firearm, he risks wounding the bear, which might make it more aggressive. Plus, guns are heavy and unwieldy, which makes them unsuitable for many hiking trips.

But there’s an even more compelling reason to use bear spray: it works better. According to a 2008 study co-authored by Dr. Stephen Herrero—whose Bear Attacks: Their Causes and Avoidance (1985) is the definitive book on the subject—bear spray is considerably more effective than a gun when it comes to deterring bear attacks. The researchers studied the use of bear spray in Alaska over a 20-year period and found that the spray stopped “undesirable” behavior an impressive 94% of the time with grizzlies and 100% with black bears.

Using Pepper Spray
Simply purchasing a can of bear spray isn’t enough to protect you, however. You must learn how to use it and then wear it in an accessible holster, so you can grab it quickly. All bear sprays are most effective when sprayed directly into a bear’s face, giving it a real snoutful of the irritants, but sometimes just a whiff is enough to send a curious bear packing. Be aware that the spray is not a bear repellant; spraying it around camp is more likely to attract bears than keep them away. Here’s how to use bear spray in the field:

In most cases, you will not get to the final step, but rest assured that bear spray can stop even an aggressive grizzly that is practically on top of you. Author and naturalist E. Donnall Thomas described one such incident that happened in Southeast Alaska:

“An aggressive young brown bear had closed to within 10 or 12 feet, despite all the usual yelling, and a friend had a rifle trained on its snout,” Thomas told me. “As soon as the spray hit the bear, the animal turned inside out and galloped off down the river.”

Safety in Bear Country
Although bear spray is an effective deterrent, Herrero says, “Don’t bet your life on it,” which means that, when you are in bear country, you should take every precaution to ensure that you won’t need to use your spray. Educate yourself about the proper storage of food, where you should set up camp, avoiding areas where you’re likely to surprise a bear, and so forth. Although you can’t guarantee you won’t have a dangerous bear encounter, you can surely make the situation less likely.

Don’t rely on a single canister of bear spray for a whole group, either. Everyone entering bear country should be equipped with his or her own spray. You should also keep canisters readily available in the cooking, sleeping, and toilet areas of your camp. Be sure to check the expiration dates on all canisters before you head into the wild.

Many experts have compared bear spray to a seatbelt: you will probably never need it, but when you do, it could be the difference between life and death.

12 thoughts on “Tuesday Tip: How to Stay Safe in Bear Country”