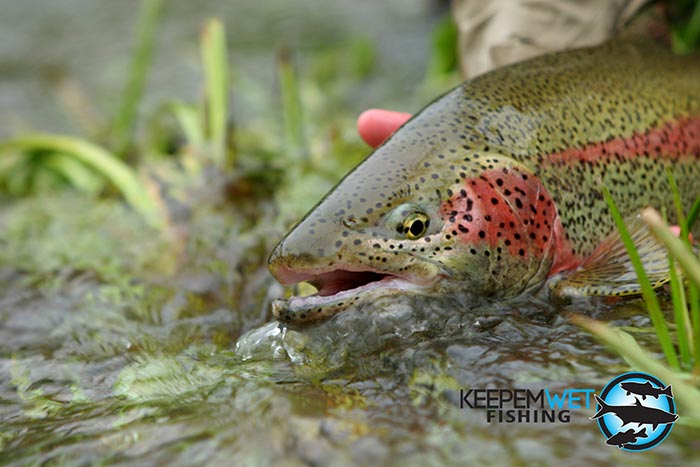 The goal of keepemwet is to educate anglers to become better fish-handlers.
Photo by Brian O’Keefe, courtesy Keepemwet Fishing

Back in 2013, I wrote a story for this blog about an experience I had with a new fishing buddy on a prolific stretch of water that he had dubbed the “Drunk Fork of the Anheuser.” The story recounts my time on the Drunk Fork hooking into some seriously burly browns, drinking a few Buds, and talking about the importance of good fish handling with my new friend, Bryan Huskey.

I don’t recall why, but when I finally got around to writing that piece, I neglected to mention one minor detail in that story that has become fairly significant: that fishing trip was the first time I ever heard the phrase “keepemwet.”

A couple years before my time out on the Drunk Fork, Bryan, who is an accomplished filmmaker and photographer, gave a presentation to a local fishing club in Idaho about his trout photography. As part of the presentation, he outlined anglers’ responsibility to be good stewards of the resource and to handle catch-and-release fish with care, especially when photographing fish.

While he was piecing together the PowerPoint presentation, he came up with a clever title for that section. He called it “Keep Them Wet.” Bryan liked the phrase so much that he started tagging his photos of wet fish on Instagram and Facebook with #keepemwet. Other folks dug the concept and started doing the same. Fast forward about five years to the spring of 2015, and this simple phrase—intended to convey good fish handling—had spread like wildfire and had ignited a firestorm on social media. Not a day would pass, without my Facebook feed blowing up with accusations, name calling, and vitriol about people’s fish handling practices and the impact it was having on fish.

In the midst of this chaos, I got a call from Bryan, who was in disbelief that this positive phrase had morphed into a lightning rod. He always saw keepemwet as an educational tool—something to encourage good fish handling—not a tool to shame those who didn’t follow these best practices. That’s when he decided that he had to take the phrase back and salvage the spirit of keepemwet before it devolved any further.

With the help of some great fly fishing companies, a host of conservation organizations, fishy media outlets, and a handful of fishing buddies, Bryan launched the Keepemwet Campaign. The mission of the campaign was clear: create a movement that empowers anglers to take small, simple steps to responsibly enjoy and share fishing experiences.

Now a year into its existence, the keepemwet message has been restored to its positive roots and continues to take hold throughout the fishing world. And it makes sense why. At the end of the day, most anglers want to be more responsible stewards of the resources we cherish. They want to know more and do better. Plus the essence of the message is simple to understand: if you’re going to choose to return a fish to the water, you might as well put it back in the best shape possible. Not to mention that practicing the keepemwet principles is an easy thing to do:

It doesn’t require any expensive tools or lugging around any large equipment out on the river. All it takes is a few minutes of educating yourself about tips for keeping fish wet, a little awareness on the water, and a commitment to handle fish as responsibly as you can.

Bryan always viewed keepemwet as the evolution of releasing fish. I hope you join the evolution.  For more specific ways to live the keepemwet ethos, check out the 10 Keepemwet Tips.

Paul Moinester is the Development Director for Keepemwet Fishing. In 2013, his conservation travel project, “An Upstream Journey,” was chronicled via a series a posts on this blog. He followed it up with a series on fly fishing in Ireland. Click here to see all of Paul’s posts.

5 thoughts on “Pro Tips: How to Properly Handle Fish and #Keepemwet”