If you got all your information about fly fishing from a certain type of angler—we all know a few of these guys—you’d think that learning the sport takes many years and requires you to master a plethora of complex skills. After all, if you want to actually catch fish, you’ve got to be able to read the water, figure out where the fish are, identify hundreds of aquatic insects, choose the perfect imitation of the one life stage of the one insect on which the fish are feeding, make several different kinds of elaborate casts, achieve a perfect “dead drift” with your fly (avoiding such horrors as “micro-drag”), recognize the subtle strike of a highly educated trout, and set the hook with the just the right technique. Or so the Izaak Walton-quoting, bamboo-rod-fondling, size-28-midge-tying crowd would have you believe.

Of course, none of it is true. Sure, some Obi-Wan Kenobi who possesses all of these skills is going to catch an awful lot of fish, but even a complete novice with a fly rod can scare up a couple of trout, which often aren’t nearly as smart, picky, or wary as most people think. They key is learning how to get away with the fact that you’re not a great caster, mender, or entomologist. Here are seven tricks that will fool trout and make up for less-than-fully developed fly-fishing skills and know-how.

If you find that, no matter how hard you try, you can’t get your line to roll out perfectly in front of you when you lay the fly on the water, don’t give up. Sometimes an ugly, sloppy cast actually works better because all that slack on the water gives the fly more time to drift before the force of the current against the line creates drag. There’s actually a name for what you’re doing: the Pile Cast.

The key is to know where to place the cast for maximum efficiency. Make sure that your line crashes to the water several yards upstream of where you think a fish might be. (If you’ve seen the fish rising, you’ll know exactly where it is.) This way, the fly can drift away from the rest of the line, and by the time the fish sees it, the fly is floating all by itself. When the fish strikes, raise the rod and strip in line to quickly pick up all the slack. This method also works well for fishing downstream, although you will get a slightly shorter drift.

Sometimes the wind makes it tough to cast, or you simply might not have the skill to cast as far as you need to. In this situation, let the surface tension of the water to do all the work. It’s called a “water haul,” and it’s quite simple.

Let out as much line as you need, and allow the current to take the line directly downstream of where you’re standing. When the line is straight out behind you, reach your rod hand downstream as far as you can and touch the rod tip to the surface of the water so there is no slack between the rod and the water. Now—very slowly—begin to make your forward cast, lifting the line off the water as the rod tip rises. You’ll feel the resistance caused by the line in the water; this will load the rod. As the rod passes in front of your shoulder, give a quick, powerful snap of the wrist. You’ll be amazed by the way your line shoots upstream, and it will go wherever you point the rod tip at the end of the snap. Fish out that drift, and repeat the process—all day if you want to. If you’re fishing a dry fly, make sure that you slather it with floatant to keep it from getting waterlogged when it’s hanging in the current.

There’s an old saying among fishermen: You can’t catch fish if your line isn’t in the water. Novice fly fisherman should take this to heart. . .and take it to the extreme. Unless you are casting or changing flies, keep your fly in the water. If you need to adjust your sunglasses, take off your jacket, or blow your nose, don’t stop fishing. Simply let your fly drift, swing, and hang in the current.
This is especially true when you’re moving to another spot. Cast your fly, and then work your way up- or downstream. If you’re walking upstream, your fly will be dragging behind you, and every angler has a story about catching fish this way. If you’re walking downstream, stay several yards behind the fly, and let it drift naturally for as long as you can.

It happens to even the most experienced fly angler: the fish are rising, but either you can’t figure out which insects that the fish are eating or you don’t have a good imitation of it. Novice fly fishermen often lack the entomological knowledge to identify the insects on the water. When this happens, simply look through your fly boxes for your most garish attractor pattern. Sometimes, the fish get so keyed on a single characteristic of an insect that they won’t take a fly that is close, but not close enough. However, oftentimes they will readily strike a fly that looks nothing at all like the insects they’ve been feeding on. Good hatch-breaking patterns include Royal Wulffs, Humpys, Trudes, and Stimulators. Believe it or not, a streamer or a Woolly Bugger drifted through a hatch often produces big strikes, as well. 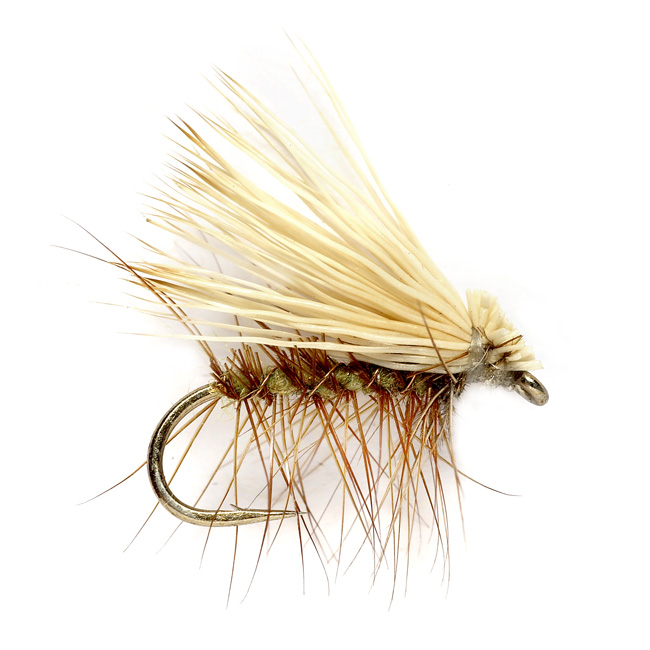 A high-floating caddisfly imitation will often draw more strikes when you give it some action.

If you simply cannot make a dry fly drift naturally—because of difficult currents or poor mending technique—don’t give up. Simply put on a fly that doesn’t require a dead drift—the Elk Hair Caddis. If you watch real caddisflies, they hop, flutter and shimmy on the water’s surface, and the trout seem to love it. So cast a caddisfly imitation and let the currents drag it across the water. You may even want to wiggle your rod tip to give the fly even more action. This technique works particularly well when you’re fishing downstream beneath overhanging trees or bushes. Let the fly drift until it’s hanging in the current, and then hold your rod tip high and start twitching the fly as you retrieve it. This is another method that requires no casting at all: you can simply let the current take the fly downstream for you before you start to twitch the fly back.

If you fish at the base of a dam or a waterfall, here’s a method that requires virtually no casting or retrieving technique. Tie on a streamer that imitates a baitfish—a Black Ghost or a Mickey Finn, for instance—and lob it right into the heaviest whitewater at the base of the dam or waterfall, and then simply hold on. The cast doesn’t have to be pretty or delicate; it just has to get the fly there. Because the rough water makes it impossible for the fish to see you, you can get pretty close, so you don’t need to be able to cast very far.

The fly imitates a stunned baitfish that has been washed through the dam or over the falls, and big trout often line up in the heavy current to snap up the incapacitated morsels. The strikes are usually so vicious that the fish will hook itself, but to be sure, try to keep as little slack between you and the fly as possible.

One of the biggest mistakes that beginning anglers make is that they slosh right into a river without casting to the water along the bank. If you’re fishing a river with brushy banks that go right up to the water’s edge, one of the easiest ways to catch trout is to “dap”—that is, to stand on the bank and hold your rod over the water, with just enough line out that only your fly and a few inches of tippet touch the water. Dapping is ridiculously simple because you don’t have to cast at all.

Make a stealthy approach, being careful to step carefully; the ground transmits vibrations that spook fish. When you get half a rod’s length from the edge, kneel down and flip your fly onto the water. Use the length of your rod to reach over the streamside vegetation, and follow the fly’s drift with your rod tip. This technique works especially well where there is an undercut bank or overhanging bushes and grass.

All of these tips will help a novice angler get into some fish, but guess what? Expert anglers also know that these techniques work and will employ them whenever necessary.