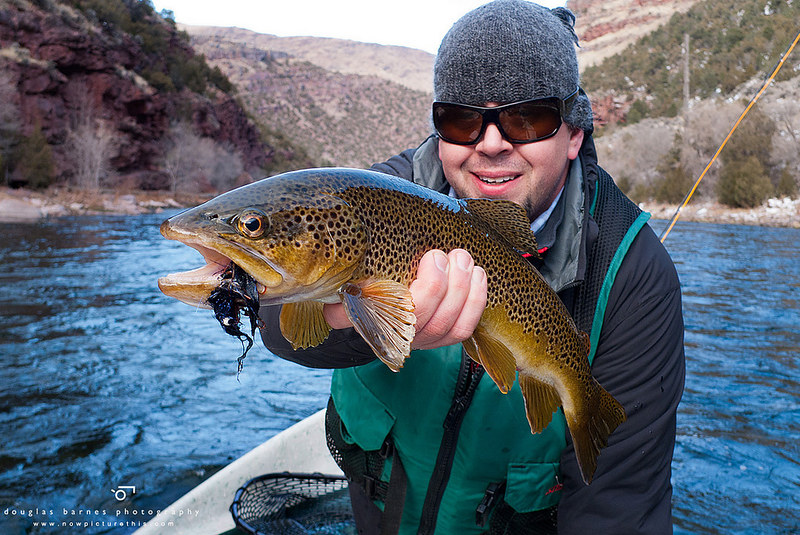 When the nights turn cool and leaves change colors, trout start to feed more aggressively, often abandoning their notorious wariness. The major insect hatches of the year are over, and a long winter is coming, so the fish are driven to pile on the calories. Plus, brown and brook trout need to build up energy for the spawning ritual. As the fish battle for prime beds and mates, trout also become more territorial, attacking anything that invades their staked-out home turf. The combination of these behaviors makes fall the prime time to cast streamers, which the trout see as both high-calorie meals and alien invaders.

Although the standard tactic—casting a Woolly Bugger quartering downstream, throwing an upstream mend, and stripping the fly back—will often work, there are other sometimes more effective ways to fish streamers. Here are three tactics for fooling big trout this fall.

Size Counts
The old adage “big fly, big fish” can be especially true in the fall. Over the past couple decades, some Midwestern anglers have turned to throwing increasingly huge streamers, sometimes with two hooks and a length topping six inches, to target only the biggest fish in the river. This is a game for pros only, but the rest of us can apply this concept to our own fly choices. Big flies that offer a bulky profile and lots of motion in the water usually outperform more traditional feathers-and-hair patterns. The Hawkins Triple Double is a good example: featuring a rabbit-strip tail that undulates enticingly, Flashabou and rubber legs to a get a fish’s attention, and dumbbell eyes to give the fly a jigging motion in the water, this things just screams “eat me!”—especially when you use a variable retrieve. Tied on a size 4 hook, the Triple Double is not so unwieldy that you need an 8-weight to cast it. If you do want to chuck the truly monster streamers, try one of Mike Schmidt’s patterns, such as a Junk Yard Dog or a Mike’s Meal Ticket, or one of the many flies created by Kelly Galloup. 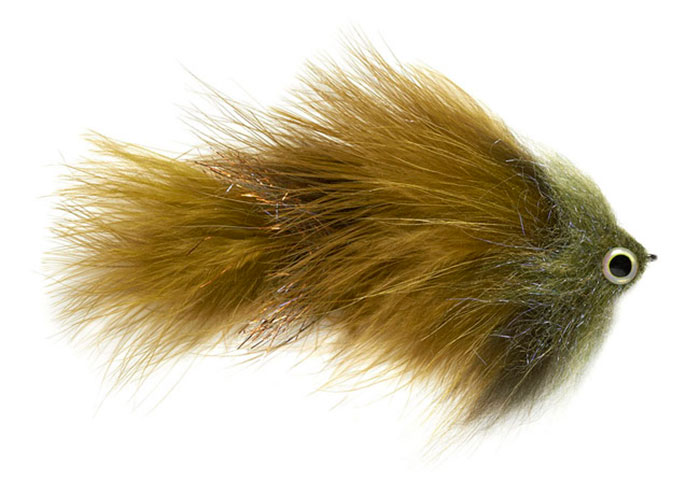 The wide head of the Junk Yard Dog pushes water and kicks the tail around, creating a lifelike motion.
Photo via orvis.com

Play Dead
There are times when, for whatever reason, the trout seem sulky and unwilling to attack your offering. That’s when you need to make them an offer they can’t refuse: an easy meal they don’t need to work for. Instead of stripping the fly, dead-drift it—as you would a nymph—through the strike zone, allowing the currents to give the materials some lifelike motion. This strategy works best where trout go to hide: along deadfalls and weedbeds, in deep holes, and below midstream rocks. Keep a fairly tight line, so you can quickly detect strikes, as the trout darts out of its lair to intercept the “crippled” streamer. You’ll miss a few fish with this method, but you’ll move trout that wouldn’t budge otherwise. The Rubber-Legged Bugger works great in streams that have good crayfish populations.

Double Up
Although most anglers have fished two flies before—say, in a hopper-dropper rig—fewer have fished two streamers at the same time, but this is a great way to discover which colors and patterns the fish are keying on. Start with a stout, 7-foot leader of 1X, and tie on the first fly. To the bend of its hook, add two feet on 2X mono, and tie on the second fly. The two flies should offer contrast: dark and light, flashy and subtle, etc. I will often start with a sparkly Tequeely up front and an olive-and-black Woolly Bugger behind it.

To cast this heavy rig, open up your loop and don’t try to reach spots too far away. If you are in a boat, cast your rig right to the bank and start moving the flies immediately. The best retrieve is a strip-and-pause, which causes the flies to dart and then “die” in the current. Trout will often strike during the pause, so be ready to hit it with a strong strip set. 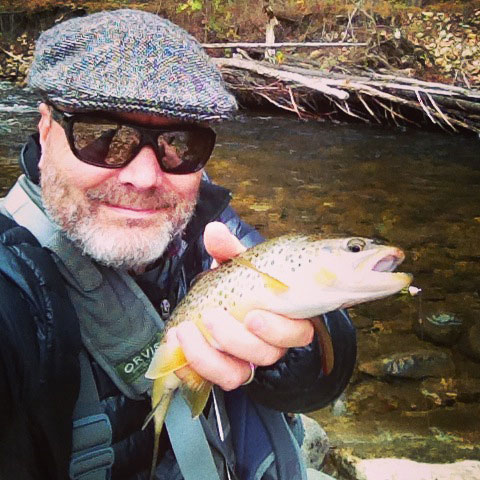 My last fish of 2014 wasn’t huge, but it had a big appetite for a dead-drifted Cone Head Bugger.
Photo by Phil Monahan

Fall fishing is affected by weather, temperature, spawning behavior, and a host of other factors. One day, the trout will hammer a moving fly, whereas the next they’ll require something “dead.” With several different streamer tactics in your arsenal, you’ll be best equipped to deal with changing conditions and give the fish what they want.