There’s more than one way to achieve the gorgeous cast demonstrated by the late, great instructor Bill Cairns.

The idea that there is a single, “correct” casting motion is one of the great fallacies in fly fishing. Spend enough time at the casting pool at a consumer show, and you’ll see several big-name instructors make the case that their method is better than the rest. Truth is, they’re all wrong. What works for your buddy might not work for you at all. This is not to say that all casting motions are created equal, but anyone who claims that there is one “right” way to move your hand and arm through a casting stroke has not spent a lot of time watching elite casters.

A couple of guys who have studied expert casters are Al Kyte, a professor emeritus of physical education at the University of California at Berkeley, and Gary Moran, who has a PhD in anatomy and kinesiology. In the 1990s, they filmed and studied some of the world’s best casters and noted that there were two factors in play: the substance of a fly cast describes those elements that were common among all the subjects of the study; the style of a fly cast describes the actual casting motion used to achieve the substance. Kyte and Moran noted that there were wide stylistic differences among the casters they studied.

The upshot of these findings is that the specific motion of the hand and arm are not nearly as important as the caster’s ability to master the “essential physics” of the fly cast. Kyte described these essential physics as a series of three straight-line movements that occur before, during, and after a cast:

First, the caster starts a forward casting stroke when the fly line is straightening directly back from his intended target direction. Next, he smoothly accelerates the rod tip and fly line forward along this target direction. Finally, he stops the rod so that the line rolls out over itself along this same path in as narrow a loop as possible, until it straightens again. (“Fly Casting: Substance and Style,” American Angler, March/April 2000) 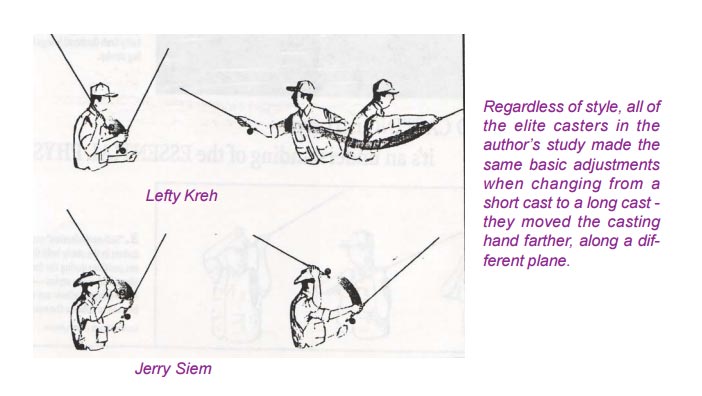 Both Lefty Kreh and Jerry Siem are elite casters, but their styles could hardly be more different.
Image via fedflyfishers.org

You’ll notice that these scientists don’t tell you how to hold the rod, move your arm, or track the rod tip. That’s because there are myriad methods to achieve these essential physics. When Lefty Kreh opens his body and increases the length of his stroke for a distance cast, he is displaying just one way to achieve this straight-line acceleration. Jerry Siem, rod designer for Sage, achieves the same affect with a more compact motion that brings the rod butt over his shoulder as his body remains square to his target.

What Kyte and Moran found is that, once they’ve learned the basics, most casters “self optimize”—that is, they unconsciously choose those movements that seem to work best for them. Differences in anatomy, size, and strength come into play in this process. For instance, a tall person has a longer lever (the arm and rod) to work with, but a shorter person may compensate with arm speed. If you look at world-champion Steve Rajeff’s physique, you can see that his power enables him to make incredibly long casts with a motion that simply wouldn’t work for a slighter person.

Rather than focus on learning a particular style, casters should focus on the most basic substance of the cast—moving the line along as straight a path as possible. So don’t listen to anyone who tries to make you move your arm a certain way, unless he is trying to help you achieve this straight-line acceleration. As Kyte put it, “As long as your fly line moves and unrolls in a straight line, there is no reason to feel self-conscious about your style.”

Watch the three pick-up-and-lay-down casts in these videos from the Game Angling Instructors Association to see how three different casters achieve the same thing.

This article first appeared on Midcurrent.com.

11 thoughts on “Pro Tips: There is NO “Correct” Casting Style, So Find Your Own”