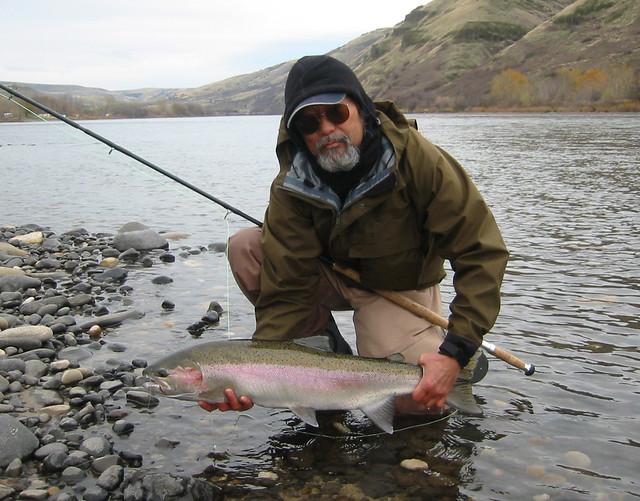 [Editor’s Note: After seeing our brief rundown of steelhead facts a while ago, Orvis Sporting Traditions Specialist Dan Gracia felt the need to weigh in with some more specific info on the Pacific Northwest’s great game fish. I think Dan might be suffering from steelhead fever, but we are the beneficiaries of his illness.]

Throughout most of the Pacific Northwest, steelhead young spend a year in their native rivers before they smolt and head out to sea. This smolting process is the changing of the steelhead young’s physiology to allow it to thrive in a saltwater condition. Up until this smolting process takes place, they are virtually indistinguishable from native landlocked rainbow trout. When steelhead smolt, they turn a bright silvery color with a blue-steel colored back. They are typically about eight inches long when they smolt.

Steelhead spend one to four years at sea. How long a steelhead spends in the ocean depends a lot on what ocean currents are active at the mouth of their river when they leave the river to go to sea. They emerge from their native streams and follow the currents out into the middle of the Pacific to feed and grow before returning to the native rivers. Steelhead are often referred to by how many years they spend in the ocean: a one-salt fish, two-salt fish, etc.

One-year fish are common around the mouths of some Northern California steelhead streams such as the Klamath River. They don’t venture out into the deep blue sea like most steelhead smolts, but stay in the salt near the coast. When they come back into the river, they are not sexually mature and cannot spawn. Still, they come back up into the river and are great fun to play with! Usually, they will leave mouths of the rivers the following year and finally head out to sea. Although these immature steelhead are typically 22 to 26 inches long and may weigh as much as six pounds, they are commonly referred to as “half pounders.” A 7-weight rod is preferred to fish for these, though you can get away with a 6-weight if you are a skilled caster.

Two-salt fish typically return to spawn weighing 9 to 11 pounds and are some of the most explosive fish you will hook into, often leaping into the air numerous times before breaking off or being brought to hand. Three-salt fish will run from 12 to 18 pounds, with the majority of the runs being composed of 14- to 16-pound fish. Four-salt fish are the monsters that come back weighing 18 to 20 pounds or more. You’ll want an 8-weight outfit for two- and three-salt fish and a 9-weight is not too much for four-salt fish.

British Columbia is known as the home of the giant steelhead, where they may run from 20 to 30 pounds or more. This strain is slightly different from the strains found farther south on the coast in that they typically spend two years in fresh water before making their trip to the ocean and then often spend 4 years in the salt. These giant steelhead frequent the waters of the Dean River and are also found throughout the Skeena River system (Kispiox, Bulkley, Maurice, Sustut, etc.) in British Columbia. These are truly the largest steelhead in the world. 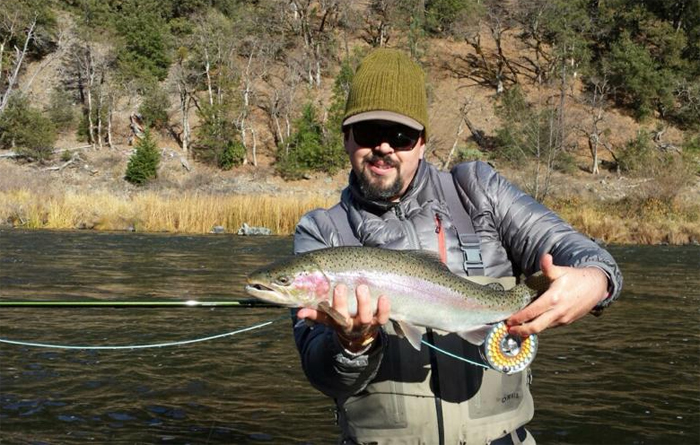 There has been a lot of controversy about whether or not steelhead feed while they are back in fresh water to spawn. The simple answer is, “Some do and some don’t.” There are no absolutes about their feeding in fresh water, but unlike Pacific Salmon—whose digestive system atrophies and shrinks to make room for the reproductive organs—steelhead can survive the spawn, go back out into the ocean and return a second and even a third time. Most steelhead only make one spawning run, however. Even if they survive the spawn and head back out to sea, the ocean is a very dangerous place, and few make if back for the multiple spawns. But some do.

Angling Methods
Traditionally, bucktail flies were and are still fished on the swing for steelhead in the Pacific Northwest. These are the same presentation tactics that were used for Atlantic salmon in the 1800s. Greased-line fishing as described by Jock Scott (A.H.E. Wood) for Atlantic salmon in 1935 became a popular method to use in the 1980s when the book Greased Line Fishing was reprinted by Amato Books. It is a particularly effective method for swinging a fly when water temperatures are in the 50s because steelhead are more active and more likely to take a near surface presentation. The advantage of the greased-line method is that it presents the fly broadside to the steelhead instead of the butt-first presentation in the traditional down-and-across swing.

Steelhead fishing in the Pacific Northwest definitely requires excellent casting skills. You need to have a good, smooth double haul to be able to cast your fly the 80 to 100 feet that is often required when fishing the large rivers of the Pacific Northwest. Shooting heads were developed in the Pacific Northwest in the 1970s specifically to deal with these extreme distance casts. Multi-tip lines are another modern option that originated with inventive steelheaders cutting the first 15 feet off the end of their floating lines, and making loops in both the belly and the back of the tip. They would then cut off the front 15 feet of various types of sinking lines and attach these tips using loop-to-loop connections so they could fish the swing in all the different depths and conditions where steelhead were found by just switching tips instead of buying four or five different lines and spools.

Swinging flies is the tradional, but not the only, method for chasing Pacific Northwest steelhead.
Photo by by Reid Baker

At one time, there were a lot of summer-run steelhead in the Pacific Northwest. Now, they are extremely hard to find, and if you do find them, you better keep it a secret if you expect them to thrive. The North Umpqua River is one place where summer runs, as well as winter-run fish, can be found. Both are chrome bright with steel-blue head and backs (hence the name “steelhead”) when they come into the river. The longer they stay in the river, the more trout-like their coloration turns. The summer-run fish are usually a little smaller than the winter-runs simply because they don’t spend as long feeding in the ocean as the winter fish do.

So there’s a little extra info about steelhead in the Pacific Northwest. If you venture out to try your hand for Pacific Northwest steelhead, you will quickly find out why they are called, “the fish of a thousand casts.” That sounds daunting but believe me, the very first time you hook one and he jumps four feet in the air and then takes out all your line and 150 yards of backing, you will be a lost soul. There is no escape.