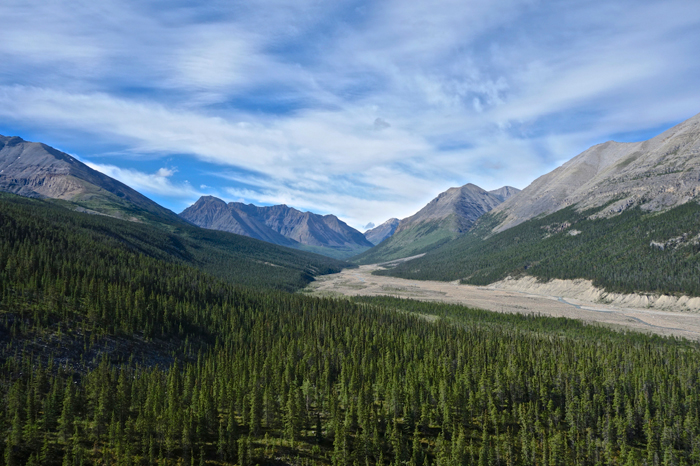 Northern British Columbia is a land of beautiful forested valleys and peaks.
All photos by Paul Moinester

It has taken me more than two months to write this story, the final portion of the greatest chapter of my life. My delinquency is partially due to the unfortunate fact that in my new life, papers on genetic resources and participatory planning—not my fly fishing exploits—dominate my keyboard time. But my belated submission is primarily a result of my inability to emotionally process this story and do it justice. Nothing I had previously written about this experience appropriately conveyed the sheer ecstasy that overcame me as I knelt in the Skeena River, in the midst of a deluge, holding the slick flesh of the most incredible fish my eyes had ever seen.

For those of us fly fishermen privileged enough to have caught that fish of a lifetime, you know the feeling. It’s a conflation of utter disbelief and spiritual euphoria that consumes you as you stare into the eye of a magnificent creature. It’s indescribably awesome, in the truest sense of the word.

The moment was made all the more spectacular by the circumstances. That gray, rainy morning on the Skeena was my last day of fishing on my once-in-a-lifetime journey. Six months earlier, when I bid farewell to the comforts of home and greeted the great unknown, I struggled to wrap my head around what I would encounter. But I had dreamed of moments like this: moments spent kneeling in a remote river, my body coursing with adrenaline, my arms straining from the weight, and my hands spread wide. 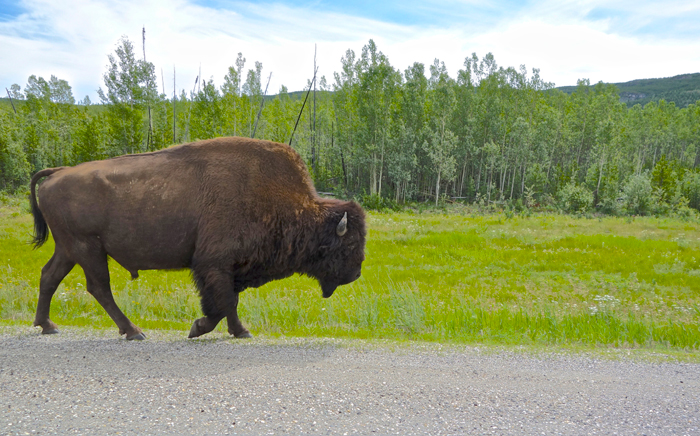 I passed this wild bison strolling along the road on my way to steelhead paradise.

The fish was also the culmination of a prolonged quest to catch my first steelhead. Until that moment, my steelheading career had been characterized by disappointment. The majority of days on the water produced no hook-ups. The ones that did were even more agonizing as fish broke off or simply vanished like ghosts at the net.

Making the experience more sublime was the miracle it took to get me to the Skeena. A week earlier, I had been stuck in Alaska, the proud owner of a car with a blown engine for which GM refused to accept culpability. It was 13 days from my journey’s end in Memphis and 16 days before I shipped off to Ireland for the year. I was 4,000 miles from home and seemingly weeks away from being able to get there.

Getting back on time seemed inconceivable, but Jim Greeson, the fly-fishing GM Service Manager in Anchorage, promised me he would make it happen. It took a little arm-twisting, but Jim convinced GM to cover the damage under warranty and had them express ship a new engine up to Alaska. Four days later, I was back on the road speeding between Alaska’s jagged peaks on my way to Northern British Columbia.

After 30 hours behind the wheel, I arrived in Terrace and set up camp 100 yards from the famed Skeena River, home to some of the biggest steelhead on the planet. Having previously abandoned my dream of fishing in BC, I was totally unprepared—I had no contacts, no idea where to fish, and no clue how to navigate the Province’s complex web of regulations. Fortunately, the guys at Fish Tales set me up with everything I needed and even connected me with local legend Rob Brown, a steelheading pioneer and avid conservationist. 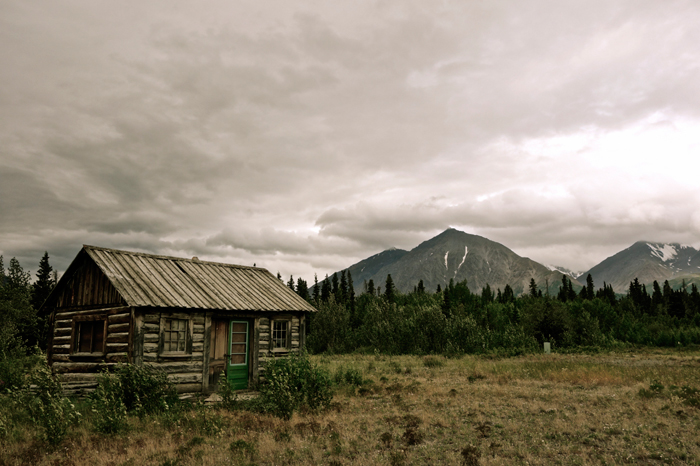 Scenery like this abandoned house in the Yukon contributed to an aesthetically stunning drive.

An hour later, I was in Rob’s “man cave” surrounded by a dozen of Bob Clay’s famed bamboo rods and grainy, black-and-white photographs of BC steelheading from the primordial days. Rob was the first person to catch a steelhead on a Spey rod on many of the region’s hallowed rivers and is one of the most fascinating people I’ve met. His love and respect for steelhead run deeper than the rivers that carve up this beautiful region.

Rob showered me with captivating stories, insightful steelheading tips, and information about the threat of the proposed Enbridge pipeline to the region’s sacred rivers. It was a riveting day, to say the least.

The next morning, I woke to rain and a river running high and fast. Poor conditions had kept most guides off the river that day, but no way was I going to let some high, muddy water prevent me from catching my first steelhead. I threw on my wading jacket, assembled my Helios Spey rod, and headed out into the bleak, chilly morning for my one day in steelhead paradise.

The poor conditions and my heart-aching history with steelhead dampened my expectations, but a small flame of hope glimmered brightly within. The stars had aligned to get me here. Now I just needed those stars to align once more with one take from one beautiful, wild fish. 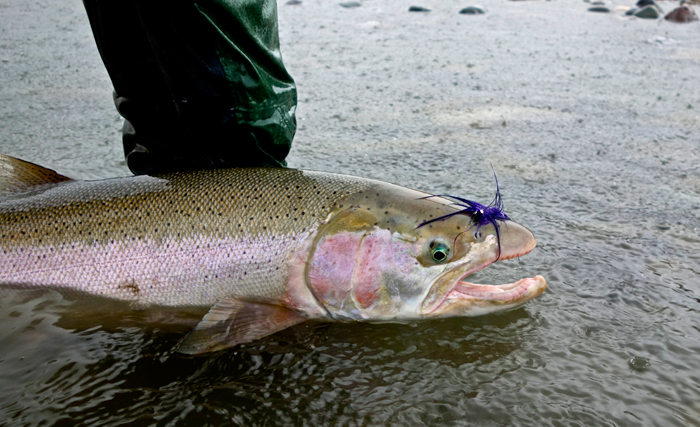 The most amazing fish of my life put up a hell of a fight before coming to hand.

Within a half hour it happened. As my fly reached the end of its long, sweeping drift, a subtle tug halted it. I set the hook and felt a soft headshake. The gentle take resembled that of a burner salmon or small dolly, so I casually played the fish, which gently swam towards me. My nonchalant approach proved to be a grievous error when seconds later a huge steelhead exploded out of the water and with a tarpon-like shake threw my fly.

I was dazed and confused. Everything I had heard and read about Skeena steelhead depicted their takes as so vicious they nearly pull your arm out of its socket. Their runs supposedly feel like a freight train trying to drag you under, not like a small fish powerlessly swimming towards you. I was caught totally off guard, and I had blown it.

Trying to ignore the anguish furiously flowing within, I repositioned myself upriver and started casting through what seemed like a promising seam. My fly was swinging through the rushing, sediment-laden river when it was struck so violently that my rod lurched toward the water. I firmly lifted the rod, and the biggest fish I have ever hooked porpoised in the muted gray distance. There was no confusion this time. This was the steelhead of a lifetime.

The sound of line screaming off my reel reverberated through my body as my neon line and backing disappeared into the dark waters. Everyone fishing below me cleared out of the river, giving me the entire run to land this submarine of a fish. 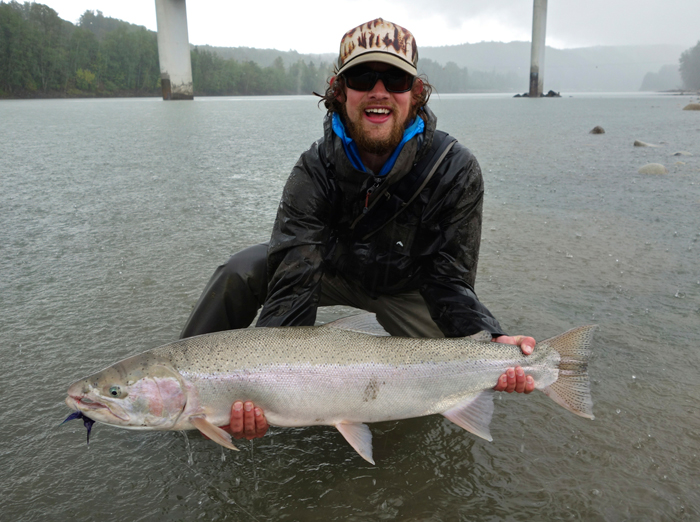 That is the smile of a man who has realized a lifelong dream.

It was an arduous, exhilarating, and anxiety-inducing game of tug-of-war. A look of sheer jubilation and angst was tattooed on my face as the magnificent fish took multiple blistering runs, each deeper and deeper into my backing. After twenty minutes of back and forth, I finally had him tired enough to coax the lunker into the shallows. Gary, an avid steelheader from New York whom I had chatted with earlier in the morning, swooped in and tailed him. As he gently lifted the hefty slab of steel, I was so overcome by the magnitude of the moment that I was nearly brought to tears.

A few quick and exuberant pictures later, the mighty steelhead was successfully released. As I watched his flipper-size tail disappear into the murky water, I reflected on how for a few fateful moments the journey of this mind-numbingly spectacular fish and my journey had intersected to form the perfect finale. Chrome-colored and fresh from the ocean, his upstream journey was in its nascent stages. My Upstream Journey, on the other hand, was coming to a close.

Less than 24 hours later, I packed up my tent for the last time, stowed my fishing gear, and punched Memphis into my GPS. I spent the next five days racing 3,500 miles home. As I inched closer and closer to the end of what I had dubbed the adventure of a lifetime, I expected to feel an overwhelming sense of sadness, but it never came. 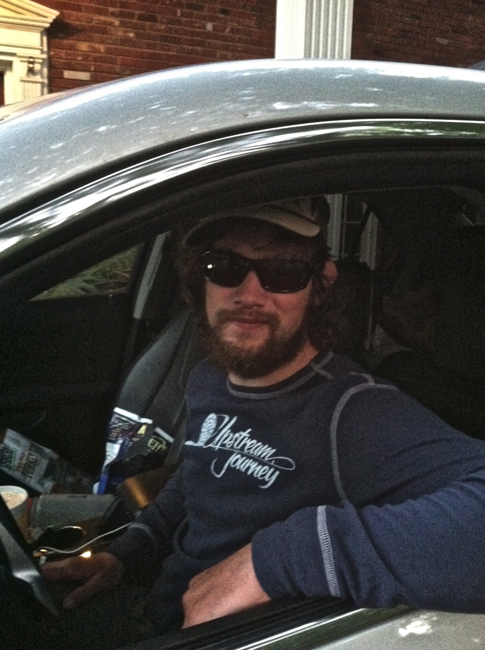 Six months and six days later, I arrived back where I started, in my parents’ driveway. The beard is longer, the hair is wilder, and my love for wild fish and this great country stronger.

At the very least, I thought I’d get a little misty-eyed as I pulled into my driveway after 28,220 miles and six months and six days on the road, but it didn’t happen. As I sat in my driveway, exhausted from the brutal drive and lack of sleep, I didn’t feel sad. I was overcome with a sense of excitement because I knew this wasn’t the culmination of my life’s greatest adventure. It was just the beginning.

Thank you to everyone who has followed along with my journey for the last six months. Stay tuned for the next installment when An Upstream Journey goes Irish!

One thought on “An Upstream Journey, Dispatch #11: The Perfect Finale”