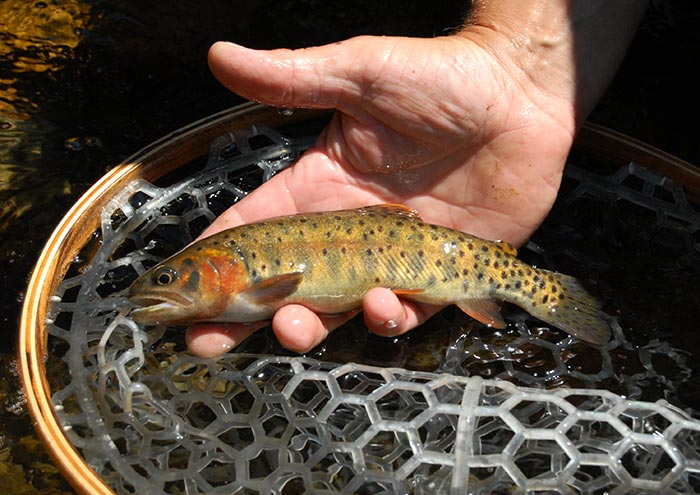 To catch our third species for the Utah Cutthroat Slam, we had to travel to a part of the state that few residents have ever visited: the Raft River Mountains. Located in the far northwest, on the southern border of Idaho, the region is very sparsely populated ranchland, and the roads you take to get there are a long way from the Interstate. Our base was an old schoolhouse that the Division of Wildlife Resources has converted to a bunkhouse, and we were accompanied by Northern Region Aquatics Manager Paul Thompson, whom we had met the day before. He made the long drive up with Fred and me on the evening of Day Three. 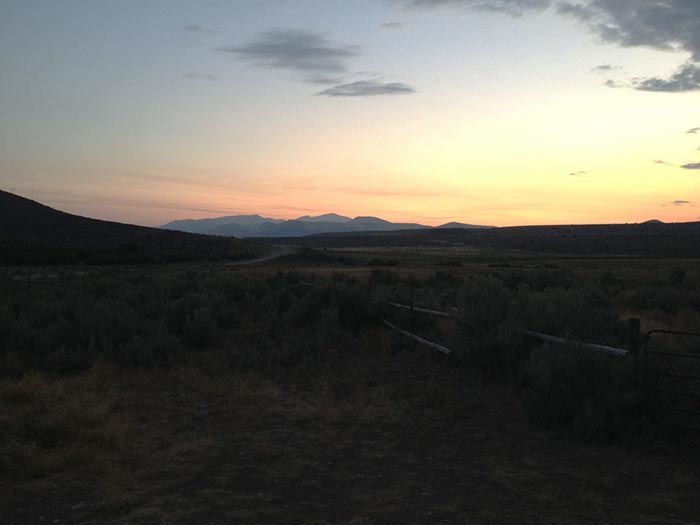 Sunrise over the Raft River Mountains of northwestern Utah.

We woke early on Day Four and watched the sun rise over the mountains. After breakfast, we headed to Basin Creek, which runs through a large ranch nearby. The fishing was surprisingly slow–a herd of cattle grazing upstream had muddied the waters quite a bit–and we couldn’t get any trout to rise to dry flies. All three of us tied on small Woolly Buggers and scored our first Yellowstone cutthroats. We were now three quarters of the way toward our goal. We also discovered we had a flat tire, which Fred took care of in record time. 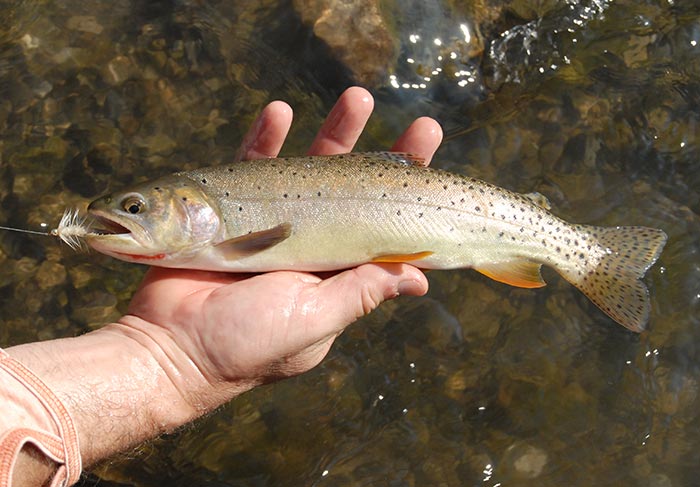 We had to go deep to catch our first Yellowstone cutts from Basin Creek. 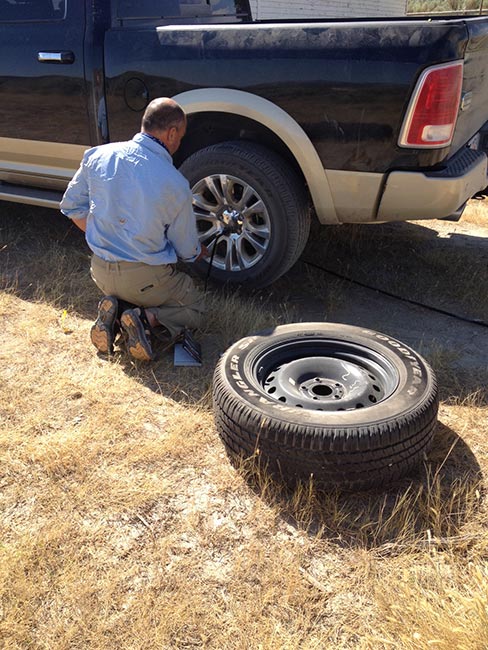 Fred is pretty handy to have around.

Since Basin Creek had been somewhat of a bust, Paul suggested that we go high into the mountains to a tiny stream called George Creek. The drive up was impressive all by itself, as the arid, dusty landscape got greener and greener the higher we went. When Paul pointed out where the road crossed the stream, Fred and I were astonished because it looked like nothing more than a puddle. 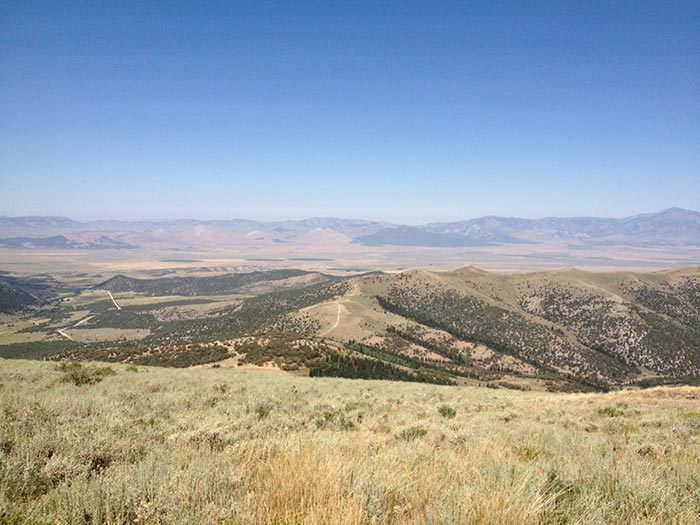 The low land in the Raft River Mountains region is arid and relatively treeless. . . 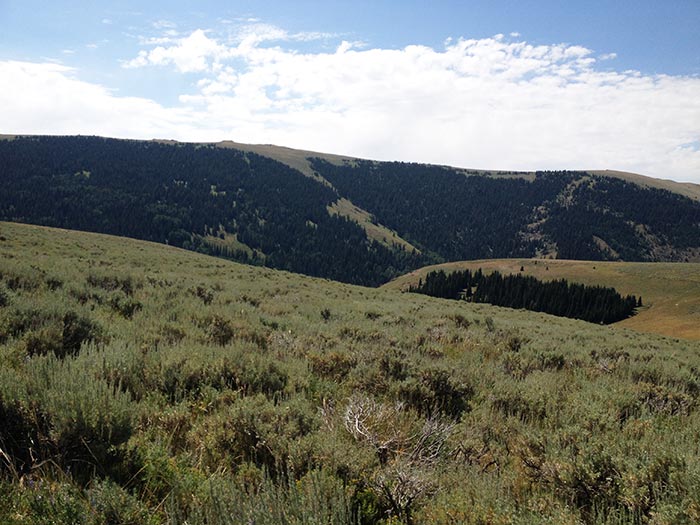 . . . but things change to green as you gain elevation. There were even fields of wildflowers.

We parked and walked downstream along a rancher’s road, surrounded by large pines and lush vegetation. Fred turned to me and said, in a whisper, “This looks like prime squatch country.” Compared to the sagebrush-and-dust habitat below, this was a remarkable change, just twenty miles and a couple thousand feet in elevation from our previous fishing spot. 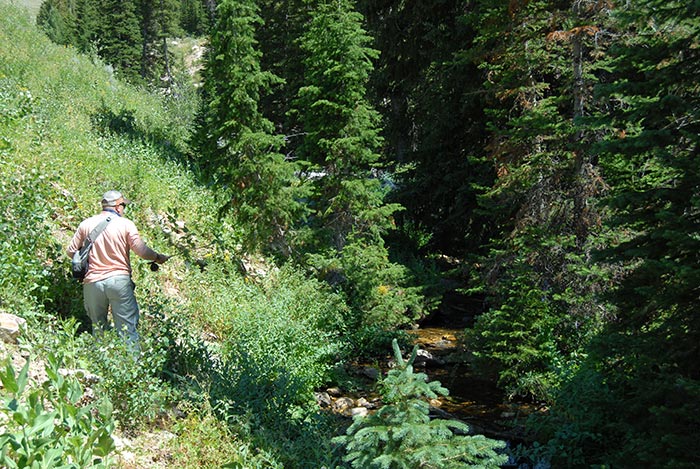 George Creek is tiny by even my small-stream standards, but it holds lots of trout. 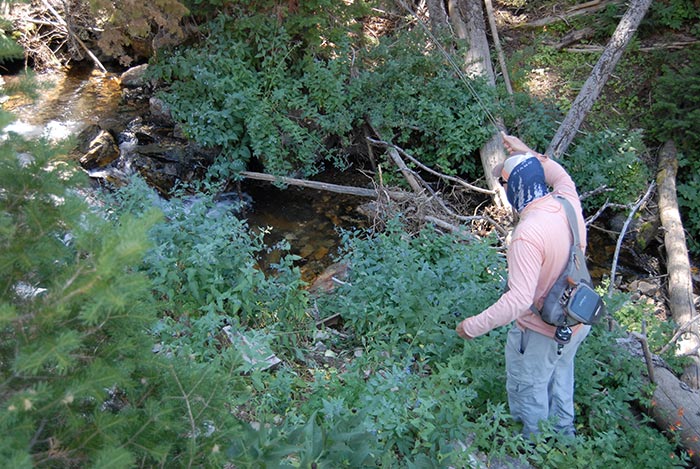 Casting and presenting a fly were challenging, but the fish were willing.

When we finally scrambled down the incredibly steep bank to the water, George Creek was just wide enough to jump across, but it featured lots of in-stream debris and plenty of plunge pools. The hard part was getting your fly on the water, as both the backcast and forward cast often featured obstacles. As we had on the North Fork of the Ogden, we resorted to bow-and-arrow casts and dapping, and it seemed that whenever we did manage to get the fly on the water, a cutthroat would slam it. 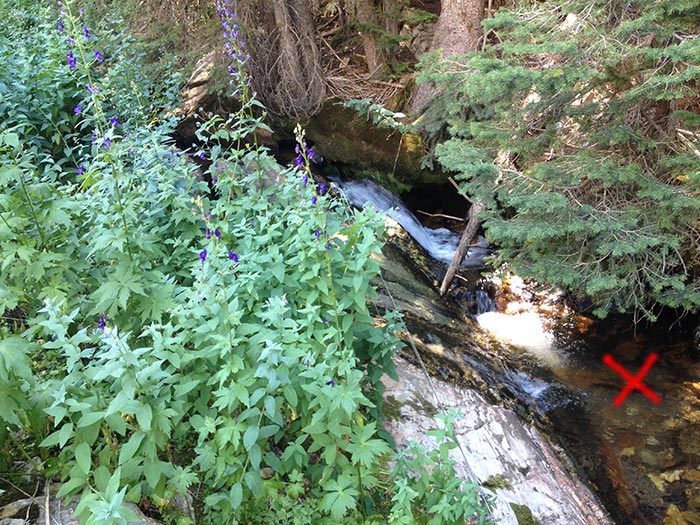 Each hole offered a unique set of challenges. Could you put a fly on the X?

We only had about two hours of fishing on George Creek, but it was my favorite water of the whole trip. We all caught several stunning Yellowstone cutthroats, and the challenging nature of the casting made for some good fun and the opportunity to heckle whoever was trying to avoid the many plants, sticks, and trees to make a good presentation. 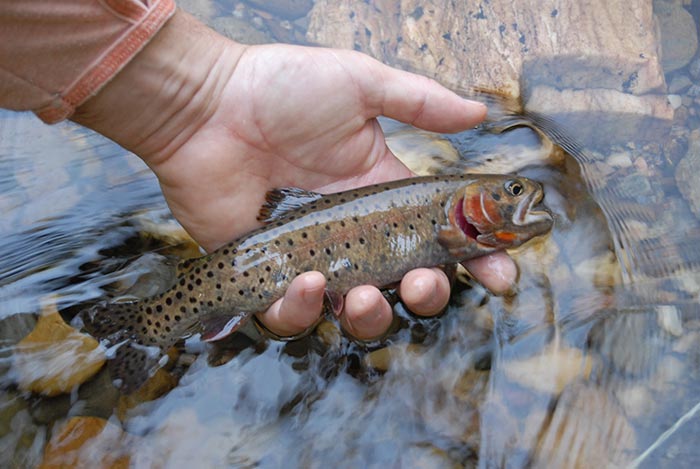 The dark streambottom produced some cutts that were similarly dark.

Now, we had just one more species, the Colorado River cutthroat, to catch for our slam. Our schedule called for us to travel six hours to the south—to another little-known Utah region—to seal the deal. Luckily, we had a day and a half to fish, so we were feeling confident. 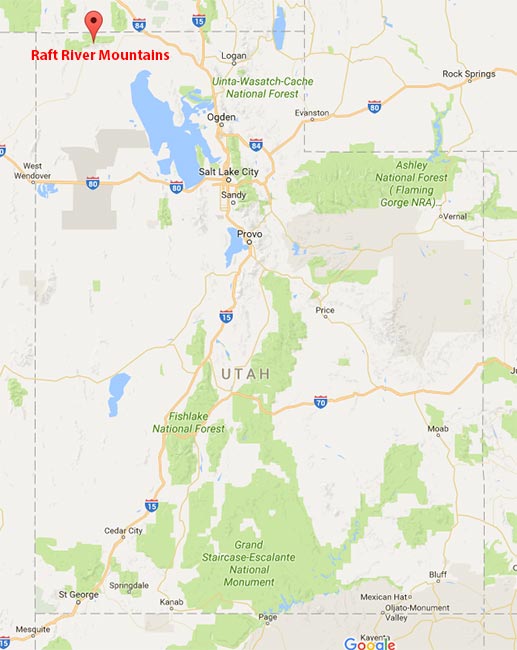 To get your Yellowstone cutthroat, you need to travel to a lonely corner of the state.