Governor Scott’s signature has made the reservoir south of Lake Okeechobee a reality.
Graphic via the Everglades Foundation

Today, Florida Governor Rick Scott signed into law a bill that will reverse the 40-year accelerating decline in one of America’s greatest natural treasures–the Florida Everglades. SB10, a bill sponsored by Sen. Rob Bradley, will fund the creation of a deep-water reservoir south of Lake Okeechobee. The benefits of this plan, according to The Everglades Foundation CEO Eric Eikenberg, are manifold:

[It] will significantly reduce the amount of harmful discharges from Lake Okeechobee that have long caused destruction along the east and west coasts of Florida. It will also allow for a significant amount of water to be stored, cleaned and moved south into the Everglades and Florida Bay where it is needed.

Our mantra is “If we are to benefit from the use of our natural resources, we must be willing to act to preserve them.” We are proud to have spent the last year working with key partners–such as The Everglades Foundation, Sandy Moret/Florida Keys Outfitters, Captains for Clean Water, Bullsugar.org, and Bonefish and Tarpon Trust–to build grassroots support and to convince Florida legislators that now is the time to act. Thankfully, the folks in Tallahassee came through, and we thank them for their willingness to listen and to make a tough choice to bet on the future. 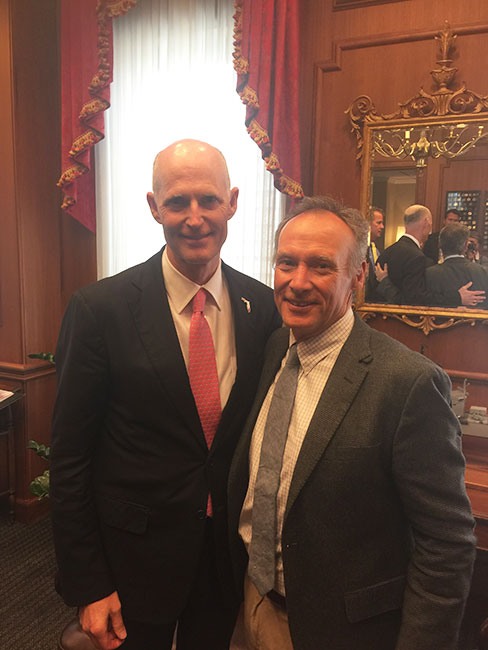 I first became aware of the plight of the Everglades 32 years ago. I was tarpon fishing with an outstanding naturalist and guide, Rick Ruoff, in Florida Bay, the body of water that lies north of the Keys and south of the Everglades. I remarked on the astonishing abundance of jellyfish pulsing on the bottom, and Rick explained to me that they were the Cassiopeia jellyfish, fond of hyper-saline water. “They weren’t here like this 5 years ago,” Rick said.

That led him to explain to me how the fresh water from Lake Okeechobee formerly flowed south through the “Sea of Grass” into the Everglades, and how those freshwater pulses made the Everglades such a global ecological treasure. He then described how nature’s plumbing of south Florida had been re-routed by private and public interests to flow east out the St. Lucie River and west out the Caloosahatchee River, depriving this part of the Keys of the freshwater that made it such a rich fishery. He alarmed me with the scale of the problem and the huge economic interests at stake. From that day, I have never thought about any conservation challenge, large or small, without thinking of the plight of the Everglades.

From Rick’s first (of many) lectures on the subject, I realized this ecological tragedy would take my lifetime to resolve, if ever! My dad had taught me to always leave a campsite better than I had found it, and this was one campsite that I really hoped we could leave better … before my life was over. In the three decades since then, prospects have not looked good, and the plight of the Everglades and Florida’s coastal waters have worsened.

Then a year ago, Dave Perkins came to the planning meeting of the Orvis Conservation Committee and emphasized that 2017 might be the best opportunity that had ever come along to fix the man-made problems that had plagued the Everglades. He was right.

Orvis customers and blog readers played important roles: donating money, sending letters and emails to legislators, and spreading the word. Good things come from passion. Passion comes from stories. We are all part of a great story.

5 thoughts on “Victory for the Everglades: Florida Governor Signs Bill to Create Reservoir South of Okeechobee”