Out Fly Fishing Outfitters is proud to be in its 12th year serving its clients by making fly fishing trips as memorable as possible for our guests. This year, we’re happy to announce that we are Calgary’s, and Alberta’s, first and only Orvis-Endorsed Guide Service. This is a decision we didn’t take lightly, having brought Orvis ELOG supervisor Tom Evenson out for the first time four years ago.

After attending the 2014 Orvis Guide Rendezvous down in Missoula Montana a few weeks ago, we couldn’t be happier with the decision to move forward as an Orvis-Endorsed Guide Service! This was the 28th or 38th annual Guide Rendezvous for Orvis, but our first time in attendance. I must say I was blown away with the event they put on. It wasn’t simply the fact that they gave everyone a free bag of stuff (which was still nice); it wasn’t that they had free beer gardens and food for us (which they did, although I’m not a beer drinker); it wasn’t the crazy sale and deals on gear (which was great); it wasn’t just the fact that they did a steak dinner and banquet for 500 guides (which was incredible); or the fact that they held a guide Olympics competition along with showing off new product on the horizon and allowing guides to ask questions and offer input (which is commendable); or the film festival where we were entertained while they gave away $30,000 in prizes (that’s not a typo, either).

One thing that really impressed me was the honesty and transparency with which Orvis portrayed the job they’ve done. It reminded me of the Dominos commercials where they showed pizzas stuck to top of the box and read customer complaints. Orvis spent a quarter of a million dollars to find out the public’s perception of their company, and it wasn’t what they probably would’ve been hoping to hear. They read us comments from surveys and focus groups where Orvis was referred to as “my grandfather’s brand” that was stuck in the past. They took some big shots to the chin, but took them in stride, in my opinion.

They shared with us the new direction of Orvis marketing which is one of adventure, action, and welcomeness. This is not to say that Orvis hadn’t been like that in the past, but it doesn’t do a business any good to be all the good qualities that no one realizes or sees you for. The openness and willingness to admit shortcomings and then offer solutions—rather than blaming the audience polled—was impressive to me. Although I guess spending a quarter of a million dollars to find out what consumers thinking of you and then not heeding those comments wouldn’t be that wise, now, would it? 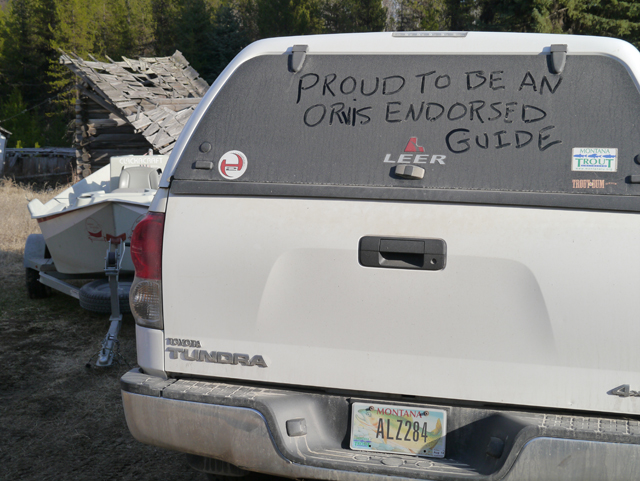 As great as all these things were, they still weren’t what really got my attention like few things have in the fly fishing/guiding industry. Coming from 18 years of coaching basketball, I obviously have a soft spot for teamwork and putting someone other than yourself first. I love coaching basketball teams in large part because I enjoy watching individuals learn that they’re a part of something bigger than themselves—that the good of the team is often more important than just what’s best for me in this moment. Sadly, I’ve too often felt that one of the greatest downfalls in the guiding industry is the seemingly perpetual stereotype of fly-fishing guides as egocentric individuals who can get caught up in the me factor and the attention that can come with be an experienced and in-demand guide.

One of the most inspiring events I’ve been to in this industry was the banquet put on by Orvis on the Friday night of the Rendezvous. I was entertained by their two speakers—Tom Bie, editor of The Drake magazine, and Tim Linehan, the 2013 Orvis Fly-Fishing Guide of the Year. Entertainment is great, but inspiration must come from a deeper source, and it didn’t disappoint. I learned that each year, awards are given for the Orvis-Endorsed Expedition, Lodge, Outfitter, Guide, & Guide Service of the Year. Now, it’s funny that I just talked about the stereotypes of guides and egos and now bring up a competition with an award to be won. But hear me out, if you will. What I witnessed was not about egos or bravado; it was about pride. Not an arrogant pride seen in shameless self-promotions, but a true pride in the integrity and work done by each of the nominees and winners for each category.

This wasn’t a cutthroat “if you’re not with us you’re against us” attitude which I’ve seen too often in the guiding industry. Instead, I watched 500 guides give standing ovations to the operations honored and recognized for their commitment to serving and putting their clients first. It was clear that we were in a room full of people who believed they were a part of something bigger than themselves, and they are proud of that.

I can wholeheartedly tell you I was proud to be a part of that and proud to say we are now an Orvis-Endorsed Guide Service. Here’s to many more years of making the trips and dreams of our guests come to fruition.

4 thoughts on “Video and Story: A New Team Member’s View of the 2014 Orvis Guide Rendezvous”