Here’s a great video about the day’s adventure.
Video by Todd Cass

Nine flyfishers gathered at eight in the morning at Kenmore Air Harbo—on Lake Washington north of Seattle—to check in for our flight. After confirming our weight at the ticket counter, we returned to our cars to wader up. With a little light banter and joking, I did some last-minute checking of tackle, gear, and flies. We all carried 9-foot 6-weight rods, saltwater-ready reels loaded with floating lines, and 9-foot 0X leaders. Some of us brought stripping baskets, in case we wanted to switch reel spools and fish intermediate lines. It didn’t look like raingear would be necessary, but you never know out here in Puget Sound country. Besides, you can always come get it from inside the plane, as the pilot, Larry Graff, would be staying with us through the day.

This looks like an intrepid group of explorers, ready to take to the air.
Photo by Leland Miyawaki

The only thing we wouldn’t be needing for our flight today was gear enough for a week. We were flying only 15 minutes away, to Cutts Island in south Puget Sound—a cobbled beach otherwise reachable only by boat. Usually, fishing beaches in Puget Sound are at least an hour’s drive from our Orvis shop in Bellevue, and the better, more remote, beaches are a good two-hour drive, one way, and with a bridge toll, to boot!

Kenmore Air, founded in 1946, is the largest scheduled and charter seaplane air service in Seattle. And the owners, Tim and Leslie Banks, just happen to be Orvis customers. 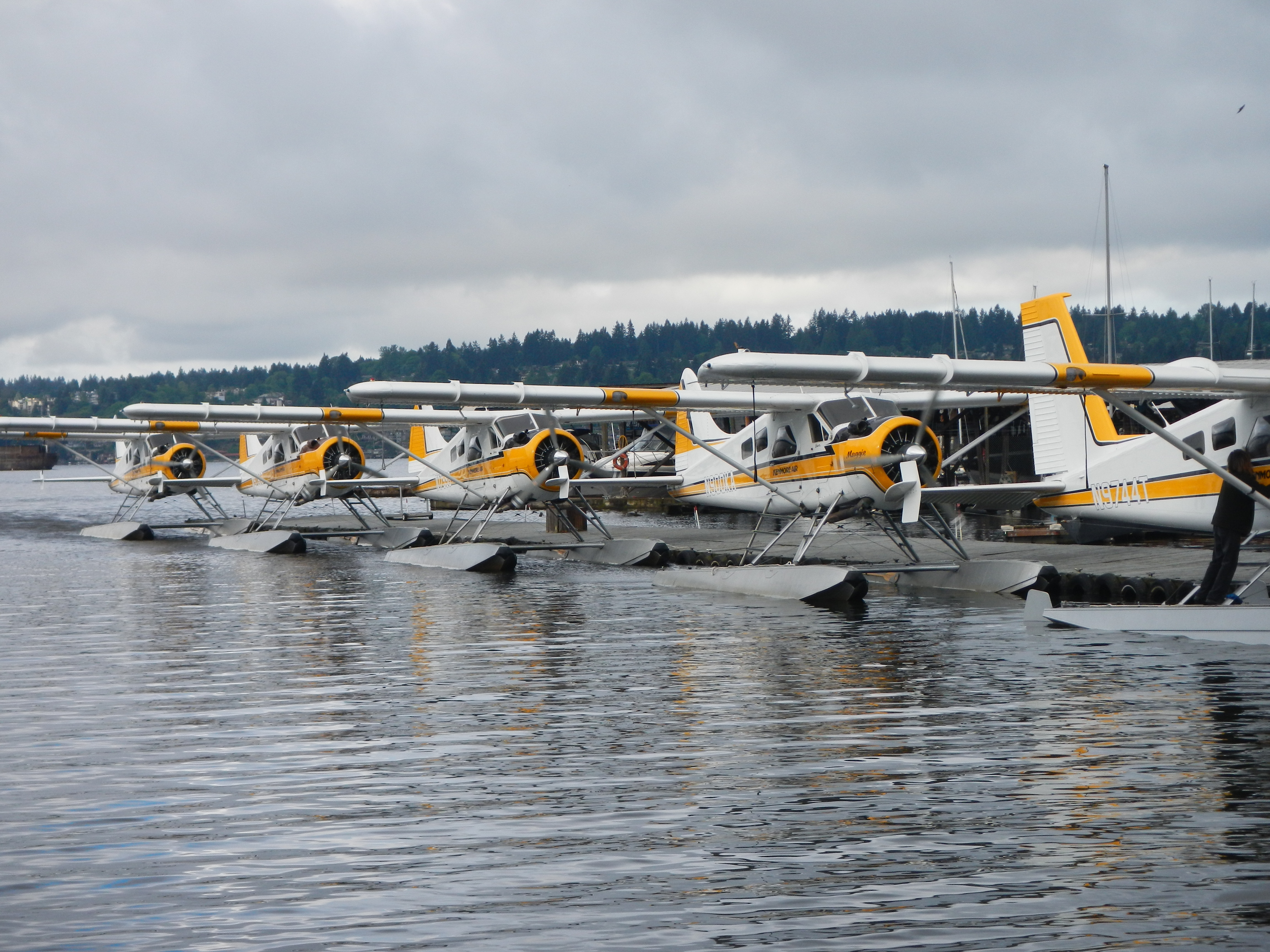 Orvis Bellevue charters Kenmore turbo Otters for eight fly fishers and one guide, who happens to be yours truly. For only $300 per flyfisher, we fly them out on a guided fishing trips. We have filled every flight within days of posting on Facebook or in our online newsletter, “Headshake Magazine.” They have been so popular that we’ve scheduled three more Southsound sea-run cutthroat trips and three coho salmon trips to Port Townsend, where we’ll meet a second guide—my good friend, Bob Triggs—this coming September.

We formed a short fire brigade line and passed the gear up to Larry, who stowed everything. I got on first, clambered into the co-pilot’s seat, and donned my headset with the mic. I look the role and, believe me, you wouldn’t want me to take over the controls. The takeoffs on water are incredibly smooth, and the sound of the engine makes me glad I have the headset on. Earplugs are in the seat-back pockets, but none of the guys ever use them. There’s something about the sound of a big turbocharged engine and men. I for one want to make sure I hear the engine until Larry shuts it down. 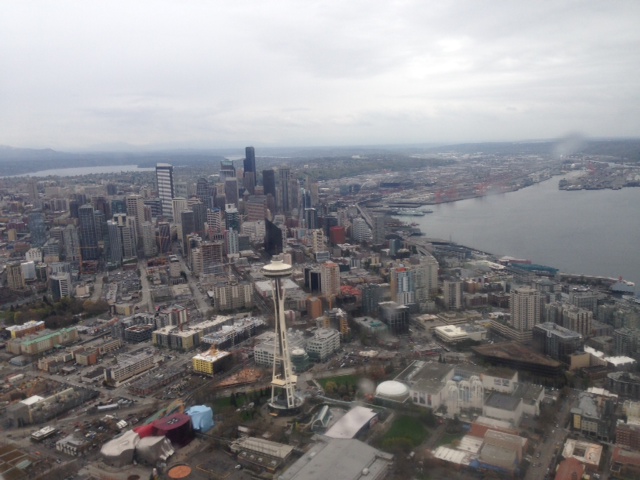 Seattle is beautiful from the air, shortly after take-off.
Photo by Leland Miyawaki

The flight is short but possibly the best part of the day. We take off from the northern end of Lake Washington. As we rise, we see the two floating bridges, Sand Point, and the Arboretum. Low over the city of Seattle we see the Space Needle in the foreground below us, with downtown beyond. UW and Husky Stadium are off to the right. Soon, we’re circling over Vashon Island, Colvos Pass, with Gig Harbor and Tacoma in the distance. We’re heading into Case Inlet and Cutts Island—a small tree-filled rocky island just off Kopachuck State Park, which is one of my favorite fishing beaches, but also one you can drive to.

The landing is a hundred times smoother on water than on land. No thumping down on hard rubber and asphalt and no hard braking, just a gentle slowing down and taxiing to the beach. We do, however, have to turn around and taxi backwards into the beach. We reverse the load-in process and pass out the gear to each other from the plane.

A few kayakers stopped by to see what we were up to.
Photo by Leland Miyawaki

On the beach, I pass out some flies we’ll use, and everyone chooses my Miyawaki Beach Popper, a topwater fly I designed 15 years ago to catch sea-run cutthroats and coho salmon on the surface. I show how to tie the non-slip mono loop knot, and we’re in business. On the water, I teach presentation techniques, stripping methods, hook setting, landing, and most importantly, good picture-taking followed by safe releasing skills. Everyone is pretty antsy by now so I say, “Let’s spread out and fish!”

Distance casting would be the only requirement on these trips. Double hauling 50 feet or more is a definite must. That plus a little patience and the acceptance that, like all predatory foraging fish, sea-run cutthroats move around with the changing tides. They can be here today and gone tomorrow. This day, it looks like they’ve found somewhere else to eat. Speaking of eating, I bring box lunches for everyone. Sitting on a log and eating in the rain can be an adventure in itself, but today we ate and basked in the sunshine on the beach on an island away from everyone else.

This kind of seclusion is available just 15 minutes from a major metropolitan area.
Photo by Leland Miyawaki

We moved to another beach after lunch. This is not easy as it sounds, as we have to break down our rods and put them away in their tubes as there are no Sumo rod carriers on the roof of the plane like on our cars at home. A couple more hours fishing, and we load up again for the flight home. We pass the Vashon Ferry and fly low over Alki, where sunbathers and swimmers are on the beach—in May! Unheard of! It was that kind of bluebird day.

We descend down low over the city and glide into Lake Washington and our dock. Was this an Alaskan flyout trip out to some remote river or lake? No, it wasn’t, but it sure felt like it. Was the fishing out of this world? No, but then we live in the big city, and for a day, we were out of this world.

The chance to escape the city to catch sea-run cutts on secluded beaches draws anglers from throughout the region.
Photo by Leland Miyawaki

One thought on “Video and Story: Flying-Out from Seattle for Sea-Run Cutthroats”