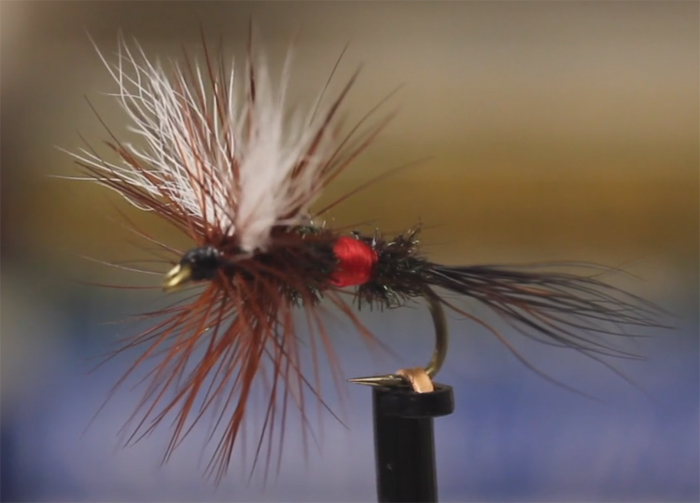 In the 1930s, Lee Wulff was trying to create a dry fly that would stay afloat even in rough water, and the result was the original “Wulff” pattern, the White Wulff. According to fly-fishing historian Andrew Herd, Wulff had so much success with his new creation that he applied the same tying techniques to come up with the Grey Wulff and the Royal Wulff. However, some historians think Wulff is unfairly credited with inventing the Royal Wulff, and point to the Hair-Wing Royal Coachman of Q.L. Quackenbush as an obvious precursor. Either way, the pattern is built on the chassis of the much older Royal Coachman wet fly, descibed by Mary Orvis Marbury in 1892:

The Royal Coachman was first made in 1878 by John Haily, a professional fly-dresser living in New York City. In writing of other matters, he inclosed [sic] a sample of this fly for us to see, saying: “A gentleman wanted me to tie some Coachmen for him to take up into the north woods, and to make them extra strong, so I have tied them with a little band of silk in the middle, to prevent the peacock bodies from fraying out. I have also added a tail of the barred feathers of the wood-duck, and I think it makes a very handsome fly.” A few evenings later, a circle of us were together “disputing the fly question,” one of the party claiming that numbers were “quite as suitable to designate the flies as so many nonsensical names.” The others did not agree with him, but he said: “What can you do? Here is a fly intended to be a Coachman, yet it is not the true Coachman; it is quite unlike it, and what can you call it?” Mr. L. C. Orvis, brother of Mr. Charles Orvis, who was present, said: “Oh, that is easy enough; call it the Royal Coachman, it is so finely dressed!” And this name in time came to be known and used by all who are familiar with the fly.

This video, by Tim Flagler of Tightline Productions, offers step-by-step directions for tying this popular pattern, but he ties it differently than most, altering the materials and choosing to add the red body accent at the end of the process. As usual, Tim offers several useful tips and tricks that you can apply to other patterns, as well. In particular, his method of trimming one side of the hackle stem should come in handy and make all your dry flies look cleaner. One quibble I have with Tim’s description: You can tie this fly down to about a size 2 for salmon, and my friend Dave Klausmeyer fishes a size 8 or 6 for mountain brook trout.

3 thoughts on “Video: How to Tie the Classic Royal Wulff”