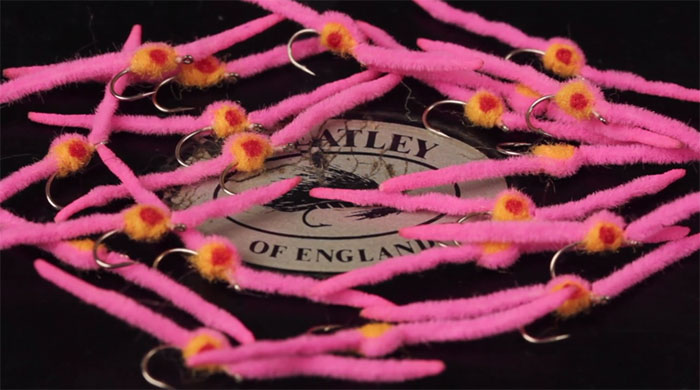 When I got the email from Joan Flagler of Tightline Productions pointing me to this week’s video, I responded, “Tim’s just trying to piss people off now, isn’t he?” Of course, I was kidding, but I knew that this week’s monstrosity—a combination of a worm and a Glo Bug—would surely ruffle a few feathers. I mean, why not add a spinner and a Mister Twister tail, right? Being an inveterate smartass, Tim even added a warning at the beginning of the video.

But here’s the thing: a pattern like this doesn’t become popular unless it works. And the Infamous Pink Worm catches fish. The pattern is the brainchild of tier Fred Bridge, of York, Pennsylvania, and he used the pattern not only for trout, but also for the steelhead and salmon on New York’s Salmon River. Some anglers view this as a fly tailored made for fooling stocked trout, but I think you’ll find that even wild fish won’t be able to refuse this fly at certain times of the year and in muddy water.

In this video, Tim Flagler walks you through each simple tying step, and as usual, he has slightly altered the original pattern. What I love about Tim’s videos is that he always has a good reason for the changes he makes, and he explains both the rationale and the method clearly. When you see how he ties in the chenille, you’ll wonder why he does it that way. But then a couple minutes later, it all makes sense.

5 thoughts on “Video: How to Tie the Infamous Pink Worm”