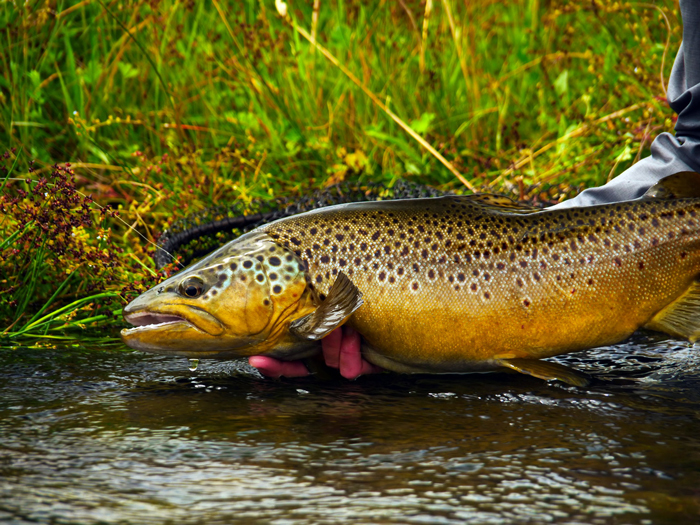 This is a trout that Amelia will remember for a long time.
Photo by Dave Jensen

The day started with a five-hour drive down island and a stop to stock up on supplies before made our way to a piece of water to fish. We have a tendency to pack our days full.

Every year we revisit a stream or two in New Zealand, especially the wee ones, which hold a special place in our minds. We knew this high-country stream typically only holds a few fish. Our hopes weren’t very high for much to happen, as we’d already sighted our way through a number of good buckets, troughs, and undercuts without seeing a single trout. So late in the season, some could have already dropped down to the bigger river.

We arrived at a bend that featured slower water along a drop off of the main seam, perfectly suited for a trout to hold in. Dave’s gut feeling piped up, “There’s gotta be a fish here. I just know it.” 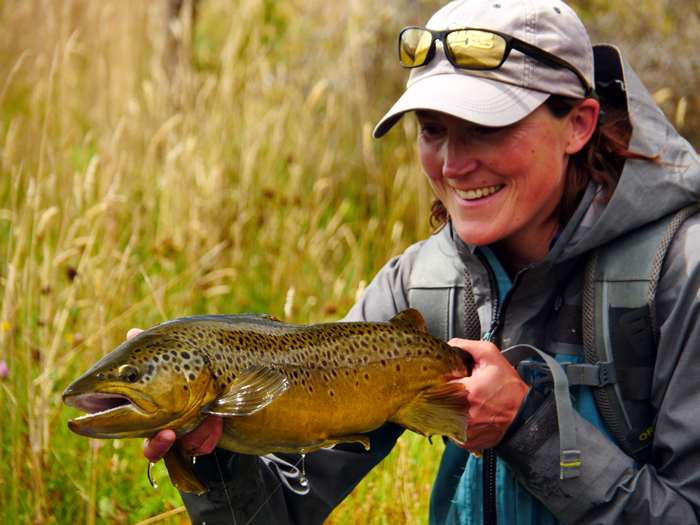 After a tough battle that requires serious concentration, Amelia was all smiles.
Photo by Dave Jensen

Seconds after that statement, a golden flash appeared and we got our confirmation. “Okay, I’m up,” I said, as I began to prep my fly setup. We didn’t see the fish rise once, but being the ever hopeful person I am, I decided I’d feed him a dry-and-dropper, on the chance he’d eat my dry. Prior to casting, we chatted about where I intended to place the fly, as Dave had the camera settings ready, hoping to capture a slow-motion eat. Against a bit of a headwind, I made one deliberately stopped false cast with good line speed before placing my fly on the water.

My cast went out, and moments later an incredible set of lips appeared around my dry fly. After a brief pause, I set the hook. And then the rodeo began. “Oh, Oh!” I said to myself as the fish was airborne on its first jump. I told myself to keep pressure on the trout and to turn the rod on its side, as I was determined to not let the fish own me. He tore under the undercut and then made another couple jumps to try to throw the hook. He wasn’t done with me yet! For as fun as it was, the intensity of the moment was so high that it wasn’t until the fourth jump that I managed to crack a smile.

Then the heat was on to bring the fish to net. Tight spaces in fast water make netting fish a real challenge. Since my shoulder had been giving me some grief for much of our trip, I chose to ask Dave for help, even though I typically love to land my own fish. In the end, I was so glad I did ask for help, as the feeling of togetherness in the moment was highlighted with us both looking at that gorgeous 6.25-pound male in the net.

After I released the fish and we kept walking, Dave shared with me how close he’d been to stopping the camera from rolling in slow-mo after capturing the initial eat, but something prompted him to continue filming. The outcome of capturing the fish jumps up close would not have happened otherwise. I felt such exhilaration and satisfaction to be that engaged in a moment with a fish and to have my best friend/life partner as thrilled with his creativity and timing on the camera. Fully connected is truly how we felt that day.

Amelia Jensen is one half of the Jensen Fly Fishing team, along with her husband, Dave. She has guided extensively on the Red Deer River and other waters of southern-central Alberta. When the season in Canada ends, Amelia and Dave head south to New Zealand for a few months of traveling and exploring the backcountry for browns and rainbows. Their photos and videos have become staples on the Orvis News Fly Fishing blog.

4 thoughts on “Video and Photos: An Epic Small-Stream Battle”