Dave and Amelia Jensen, of Jensen Fly Fishing in Alberta, have produced a second part of episode 5 in their “The Bank” series of instructional videos, shot on the same day as Part 1, which we posted on Monday. In this video—shot in the same spot as Part 1, just three hours later—Dave shows off an interesting technique for fighting a big fish in heavy water. Here’s Dave’s description:

We share the video of the fight of this fish to share a different style of fighting fish in a large, heavy water situation. The fish bolts down and across and screams upstream into Dave’s backing. Note that while the fish is on the heavy, far side of the current Dave’s rod is high. This is to keep as little of the heavy current on the line as possible, so that only the fish and rod connect, lessening the pressure on the set hook and tippet to avoid an inadvertent break off. As the fish comes to the soft side of flow, the sideways pressure is then used to attempt to bring the fish in. It bolts again but thankfully comes to net. Usually a fish that fights like this is foul hooked but this one was just a long, healthy brown with big strong fins that used the heavy current to its advantage.

The chance to see a skilled angler putting such a technique to good use on the water really helps to make things easier to understand. 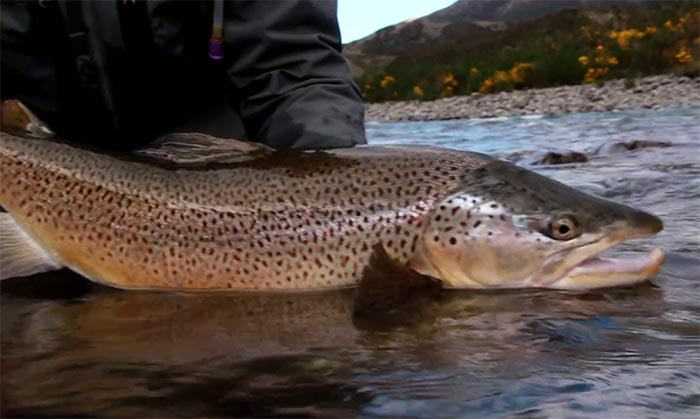 8 thoughts on “Video: “Splitting the Uprights-Part 2,” a Second Go”