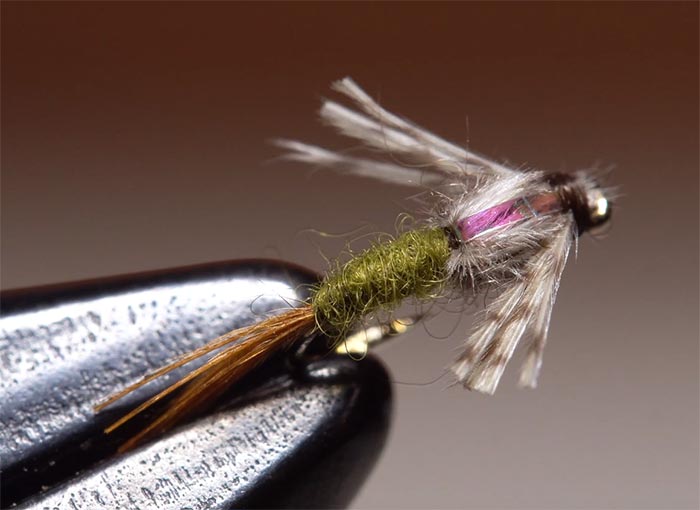 The world’s most famous fly-tying dentist, John Barr, designed his Barr’s Emerger series in 1975, after spending a day fishing a pale morning dun hatch on Nelson’s Spring Creek in Montana’s Paradise Valley. Writing in High Country Angler, Barr described how he came up with the concept:

There were fish rising everywhere, but none were taking the duns. They were taking little yellow specks. At the time I had never heard of emergers, and only carried dun imitations. I finally tied on a nymph and caught a male rainbow with a big mouth that I could easily look down inside of. On the tongue rakers at the base of the tongue were dozens of partially emerged PMD, just a small part of their body protruding from the shuck. In my motel room that night, the Barr’s Emerger was created, and the basic pattern has not changed to this day. The first patterns were on a dry fly hook and fished in the film. I then added a wet version to be fished as a subsurface pattern. In subsequent years I added a bead and flashback version.

In this great video from Tightline Productions, Tim Flagler walks you through the steps to tie this useful pattern on a tiny, size 22 hook. As usual, the way Tim prepares and ties on the materials makes even such a diminutive pattern seem pretty easy to tie. Make sure watch Tim’s videos in full 4K resolution. You’ve never seen fly tying look so good.

3 thoughts on “Video: How to Tie Barr’s Emerger BWO”