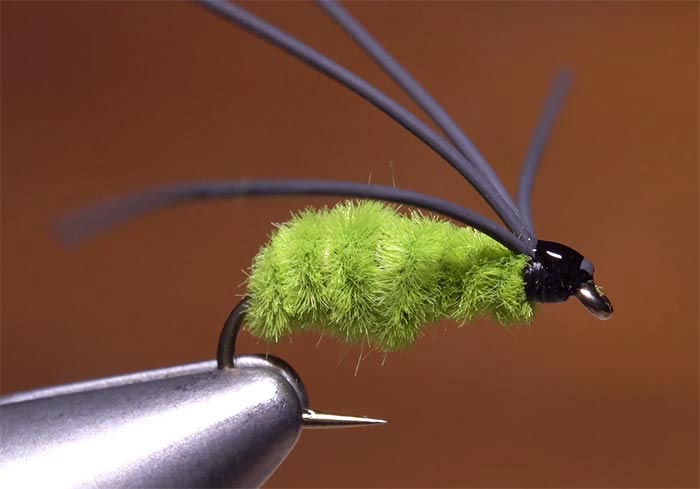 The Bully Bluegill Spider is the creation of fly tier Terry Wilson, and it was first introduced to the wider community in the 1999 book that Terry wrote with his wife, Roxanne, Bluegill Fly Fishing & Flies. According to the book, Terry accidentally hooked the rear end of a bull while casting a bass bug—which reminds me of the hilarious story in which Rudyard Kipling accidentally hooked a cow—and he wisely chose to break the fly off rather than trying to approach the annoyed animal. As Terry was re-rigging, he watched a man with a cane pole fishing with live crickets and noted that the movement of the insect’s legs seemed to trigger strikes. The Bully Bluegill Spider is Terry’s attempt to mimic those flailing legs.

In this week’s great video from Tightline Productions, Tim Flagler walks you through the simple process of tying a Bully Bluegill Spider. The keys are the proper location of the weight, which allows the fly to sink like a drop bait, and the method for attaching the wiggly round-rubber legs. I also dig Tim’s method for fishing the pattern dropped off a foam dry-fly pattern, such as a Chernobyl Ant, which acts as a strike indicator.

And if you’ve got the bandwidth, make sure watch Tim’s videos in full 4K resolution. You’ve never seen fly tying look so good.

One thought on “Video: How to Tie the Bully Bluegill Spider”