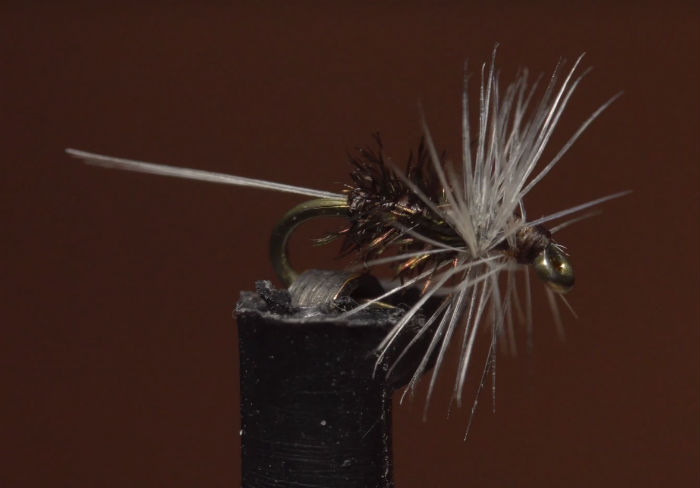 In much of the country, winter means fishing subsurface patterns almost all the time, but there are magical moments when the trout come to the surface. While the sight of these rises can be exciting, the bugs you need to imitate are usually tiny midges. And I do mean tiny, down to size 26 or 28. Of course, midges hatch year-round, as well, so you should always be prepared to imitate them.

Here’s a great midge pattern that’s been around at least since the 1970s, and it’s named for a female angler who knew how to fool trout on minuscule flies. In the book Midge Magic by Don Holbrook and Ed Koch, Holbrook describes meeting her on the river and discovering the pattern that bears her name:

I was somewhat fascinated by the many rising fish when the midges hatch in the early evening on the Big Spring Creek, near Newville, Pennsylvania. Occassionally, I’d hear the splashing of a fish being caught and would look around to see a lady releasing a trout back into the stream. She had a little dog that dutifully followed her along the bank (no wading was allowed in this section) and waited while she cast to the next rising fish. She didn’t miss too many, and it got to where I would step back when she got to the area I was fishing and invite her to fish through. She did, and she caught most of the risers. I didn’t perceive this as a problem, as I was normally fishing nymphs, so we were after different quarry – and I wasn’t having much success on the top, anywhere. This went on for two or three years, with not much more than a polite hello.

Then, one very hot July evening in 1977, I had been catching fish until they started rising, but then I couldn’t touch a fish. I even resorted to fishing dry flies on top, to no avail. Hearing that now familiar noise, I looked around to see her releasing another trout. She worked her way up to where I was waiting. I couldn’t take it any longer. I just had to ask what she was using. To my great surprise, she showed me a little size 26 dry fly with a peacock herl body and white hackle and tails. She gave me one and made me promise not to show it to anyone, and I didn’t – until now.

The lady is Peg Myers, from Newville. She doesn’t tie these flies – her husband, Barry, does it. I suspect it’s really his pattern, but I’m not going to ask. She may have another secret one I can weasel out of her some day. This is another pattern I wouldn’t be without.

In this typically great video from Tim Flagler of Tightline Productions, he walks you through the steps to tie a size 26 version of Peg’s Midge, offering great tips on how to deal with tiny hooks and materials. If you plan on getting out this winter, you’ll want a few of these in your box.

One thought on “Video: How to Tie Peg’s Midge”