Dave and Amelia from Jensen Fly Fishing have released another episode in their video series “The Bank.” We’ve discussed dead-drifting streamers before, but here, Dave explains how he fishes a three-streamer rig under an indicator at those times when the trout aren’t willing to commit fully to a stripped streamer.

We joined Aaron Feltham, manager at Calgary’s Bow River Troutfitters, for a day on the Bow River in mid-September. After two months of higher, murky water due to persistent summer storms, the river had cleared considerably and the incredible streamer fishing for larger rainbows and browns had tapered off in the bright sun. Hatches were almost non-existent. We had a choice of working small nymphs into likely riffles, pockets, troughs, and runs, or try an old tactic we pull out when trout short-strike or swing shyly at streamers: indi-streamers. The video takes a look at the set-up of a triple streamer/leech system under an indicator, as well as looking at the different times of year and in which water types it is most effectively fished.

The video is 16 and a half minutes long, but it’s full of useful information.

Check out the previous episodes in “The Bank” series: 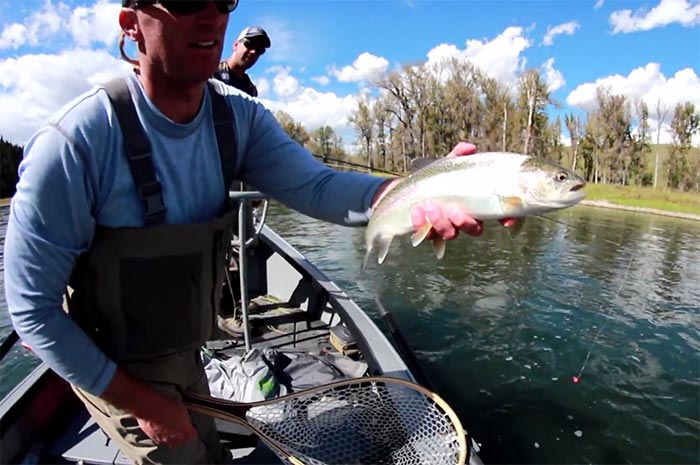 10 thoughts on “Video Tips: How to Fish Streamers Under an Indicator for Lethargic Trout”