Here’s a great lesson on how to land, revive, and release large fish. It was created by the Atlantic Salmon Federation and its partners in the Quebec government, so it’s focused on Salmo salar, but you can easily see how these techniques apply to steelhead, Pacific salmon, and even larger trout. Even better, the video features some killer shots, including a fish gobbling a bushy Bomber off the surface.

Two important points that all trout anglers need to consider:

1. Don’t move the fish back and forth in the water while reviving it. This has the opposite of the intended effect. I see a lot of anglers doing, working on the assumptrion that the forward motion forces water through the gills. Trust me: the fish can move the water through its gills by itself.

2. Keep your fingers away from the gills and eyes. I receive a lot of photos in which an angler is holding a trout incorrectly, with one or more fingers in the gills. 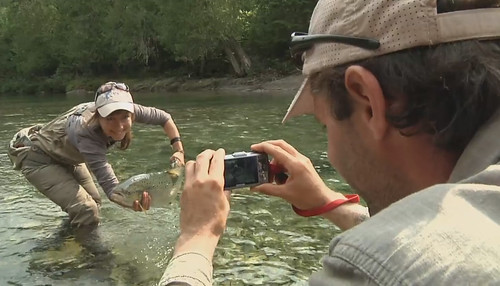 While you’re taking a photo, the fish should be out of the water just a few seconds.
photo courtesy ASF

One thought on “Video Tuesday Tip: How to Land, Revive, and Release Large Fish”