[Editor’s note: In honor of Mother’s Day, angler and filmmaker Kami Swingle presents this celebration of sisterhood in the wild, featuring a great trip to a Colorado backcountry stream with her mother-in-law, Geri.]

The buzz in the air was palpable. Thirty women, all fishy and many with extraordinary pursuits beyond the water, filled the room. I was humbled to be among these talented and fabulous women at the Orvis Guide Rendezvous in Missoula, Montana. The sense of community was undeniable and friendships were formed quickly.

Sitting there that first night, I reminisced of the women in my life who have influenced my romance with the outdoors. One of the first to mind was Geri, my mother-in-law. Cut from the same cloth as my OGR sisters, Geri can just as easily kick butt on a trail as she can kick back over a cup of coffee or glass of wine. 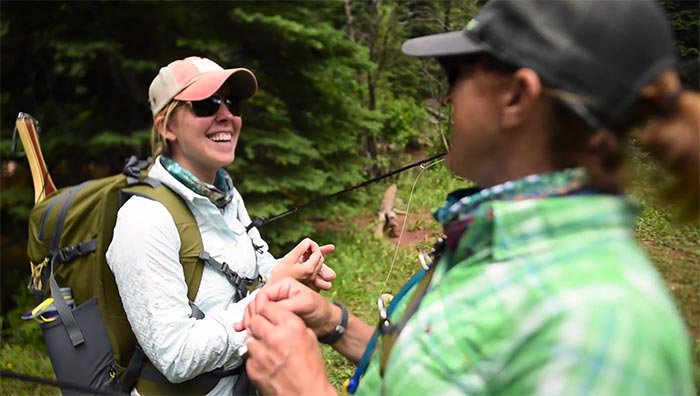 Over the last seven years, Geri and I have cultivated a friendship through the wilderness of Colorado. Often we seek out smaller streams where the wild trout and smiles come willingly. But honestly, there is always more at stake than the catching.

The trailhead has a toll: leave pretenses and anxieties here. With each step on the dirt path and each swoosh of the fly rod, the tempo of the high country is unmistakable. It is here that my wildness is restored. I once again find the rhythm of my heart.

9 thoughts on “Video: Finding the “Wildness” in Your Heart”