Tricos (genus: Tricorythodes) provide some of the best late-summer action on the Battenkill, so here are three killer patterns from Tightline Productions. (And don’t miss the fabulous video above, from John Arnold of Scumliner Media.) Fishing these tiny bugs can be frustrating, especially when the fish get selective. The late Al Miller fished the Tricos on Pennsylvania’s Little Lehigh River for 45 years, so he knew a thing or two about what patterns work best. In the late 1990s, he developed a remarkably simple yet effective fly that lacks wings or tails. Miller said that he originally left these features off the fly because he couldn’t see well enough to attach them to such a tiny hook, but the pattern turned out to be his most productive Trico imitation ever.

Female Tricos hatch in the morning, while the males usually hatch at dark. But anglers really love the spinnerfalls, which usually happen not long after the morning hatch. Standing in the river, watching a could of mating Tricos, and waiting for the first spinners to hit the water is what angling anticipation is all about. Because you know that when those flies start dropping, the trout will start rising. This great imitation, designed by Eric Stroup, uses just three materials—a hook, some thread, and some hair from the foot of a snowshoe rabbit.

I love seeing the clouds of mating insects buzzing above the water and then watching the spent spinners fall to the water, where trout wait expectantly. But I find it difficult to see some Trico patterns on the water, which can be frustrating. This parachute version should be just the ticket. 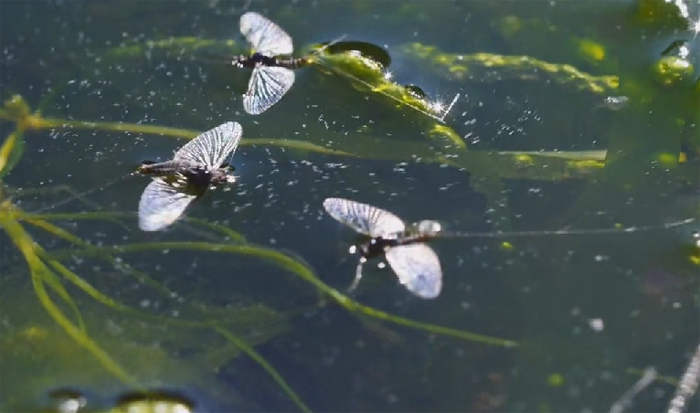 One thought on “Videos: Three Terrific Patterns for “Trico Time””