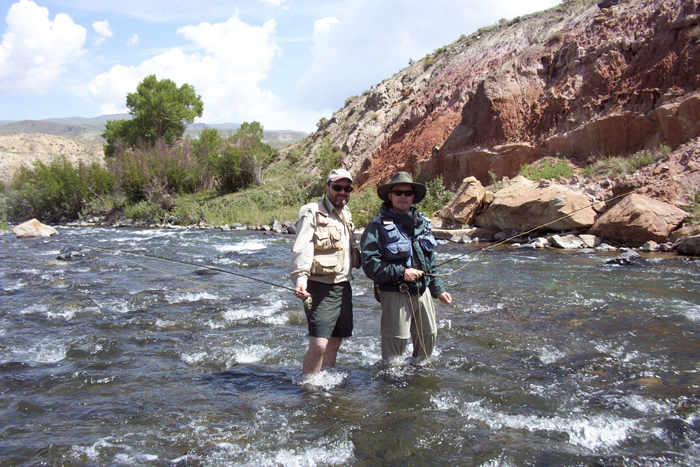 I don’t recall many fish from this trip with my brother years ago, but I tell people about it all the time.
Photo by Tim Wade

We spend a lot of time posting fly-fishing success stories, the ones that end with a fish in the net and smiles all around. But those aren’t necessarily the best kinds of fishing tales, as I learned one day during my time as a guide in the Bristol Bay region of Alaska.

Two septuagenarian judges were the best pair of friends that I ever had the pleasure of fishing with. Bill and Hal been pals for almost 50 years, and they joked, reminisced, and bickered lightheartedly all through a slow, cool morning on the Copper River. In the afternoon, the trout in one long run started feeding on stonefly nymphs, and Bill was catching huge rainbows one after the other, while Hal—fishing exactly the same fly and indicator rig—couldn’t buy a fish. As you might imagine, Bill was enjoying himself, although it was hard to tell what was giving him more pleasure, the gorgeous trout he was landing or his buddy’s frustration.

But by the end of the day, Bill was desperate for Hal to catch a fish, and Hal was resigned to the fact that the angling gods had chosen to forsake him. Both were in stitches as they tried everything they could think of to give Hal an advantage—switching casting positions, trading rods, even trading hats and vests—but nothing could change their respective luck. We even lay their two terminal rigs side-by-side on the bank to ensure that everything was exactly the same. I was dumbfounded by how the day had turned out, and I had no explanation for why only one of them had been catching fish.

Here’s the best part: When we got back to the lodge, there was neither boasting nor complaining about who caught trout and who didn’t; instead their “fish story” focused on this shared experience of bizarre and unexplainable luck. The story they took away from the day wasn’t about a particular trout or the number of trout Hal landed, but it was instead about their shared experience on the water.

What are your best fishing stories that aren’t about fish?