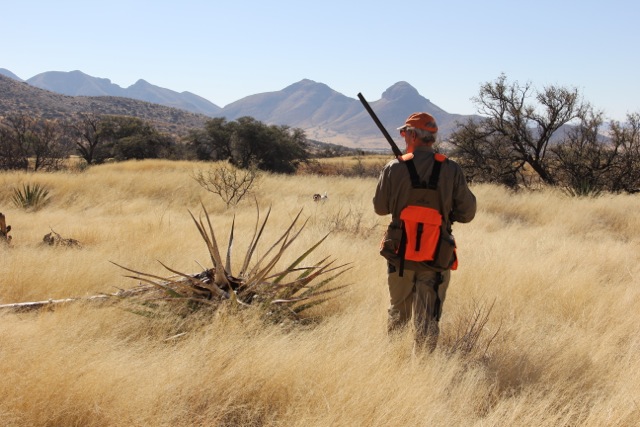 A hunter covers a point in mixed Mearns and scaled quail habitat.
Photo by Dave Brown

The range of the scaled (blue) quail extends from the Mexican states of Sonora and Chihuahua in the south to southern Colorado in the north. From east to west, the population starts in Short Grass Prairie region of the Southern Plains, encompassing western portions of Oklahoma, Kansas, Texas, and Eastern Colorado. The range extends west through New Mexico and ending in the Sonoran Desert Grasslands just west of Tucson. 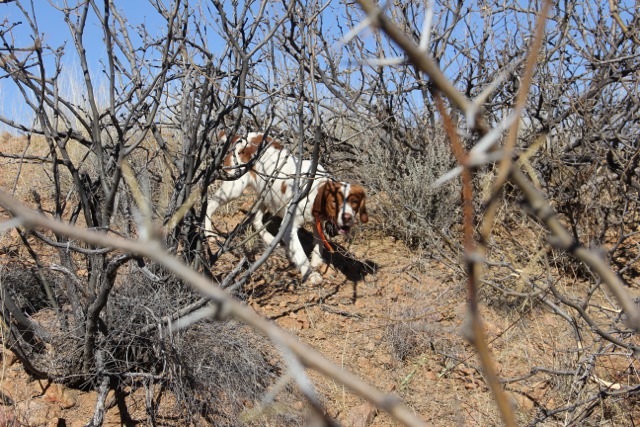 The scaled quail’s reputation as a tough bird precedes it, as they are notorious runners, which makes it hard for dogs and hunters alike to pursue them. In fact, some hunters swear that these birds cannot be hunted using conventional pointing-dog techniques and require the use of off-road vehicles. A running covey is spotted, and then surrounded by hunters, whereupon flushing dogs are released to get the birds up. This technique is used in parts of New Mexico and West Texas, where there is limited grass to hold the birds. As a result of these difficulties, the scaled quail is not on a lot of wingshooters’ “Bucket Lists”. 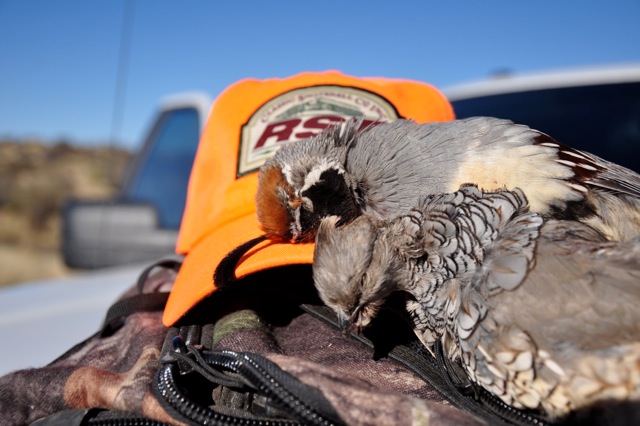 A mixed brace of Gambels and scaled quail.
Photo by Dave Brown

Where I hunt blues is in the grasslands of southeastern Arizona. The birds still run, but the cover helps hold them. Singles and pairs will drop off from the running covey, resulting in some nicely pointed birds. A lot of time, dogs will point the covey and then the dogs will relocate with the covey until it runs into a wash or up in a hillside. The the dogs or a hunter can flush them. 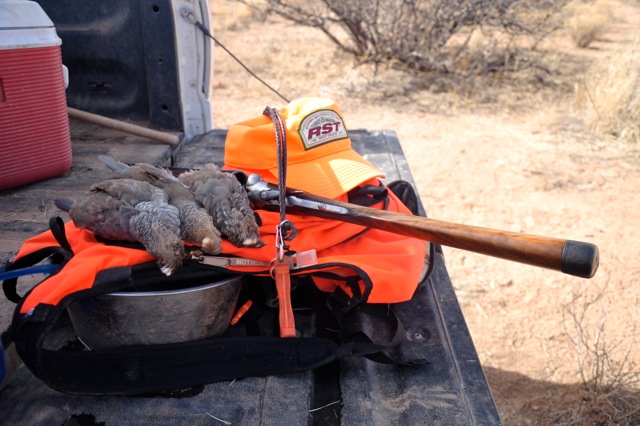 Once I start to get unproductive points from my dogs (indicating that a covey is running around somewhere), I start circling the area where the point occurred in hopes of reconnecting with the covey or forcing it to flush. Once it flushes, I can mark it down and then get on it. 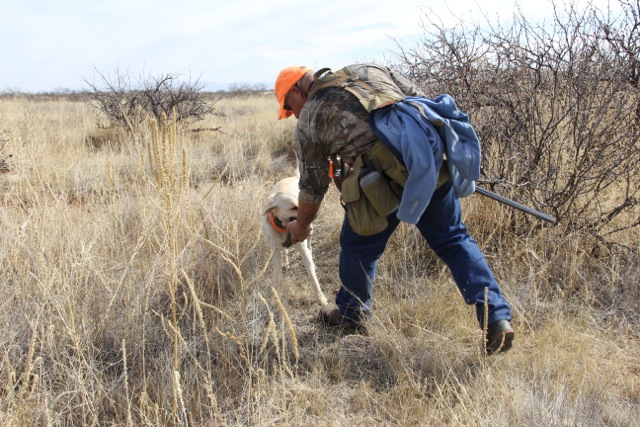 The goal is to flush and break up a covey, and then get on it before it can re-group. Some of my dogs have mastered this scaled quail cat-and-mouse game. The dogs will point the running covey, and then when released will cast out and hook back in hopes of pinning the running birds between me and them. 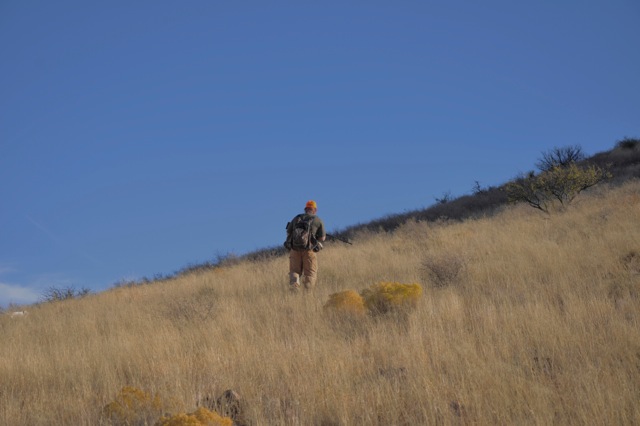 Scaled quail covey sizes range from 15 to 150 birds, but covey size is dependent on timely rains, which vary. On the Southern Plains they require spring rains, whereas in Arizona a combination of winter rain and summer rain seems to be best for a good hatch. 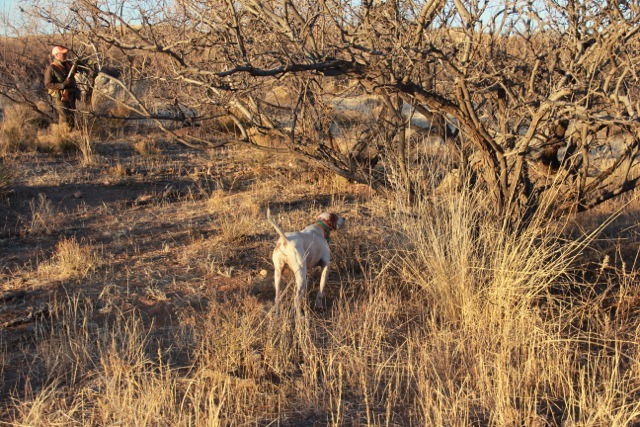 A hunter prepares for a flushing bird.
Photo by Dave Brown

One of the many pluses of hunting blues in Arizona is that hunters can also get into Gambels and/or Mearns quail, as well, since the habitats often overlap. In a good year, hunters can pursue an “Arizona Quail Slam” by harvesting all three species in one day. 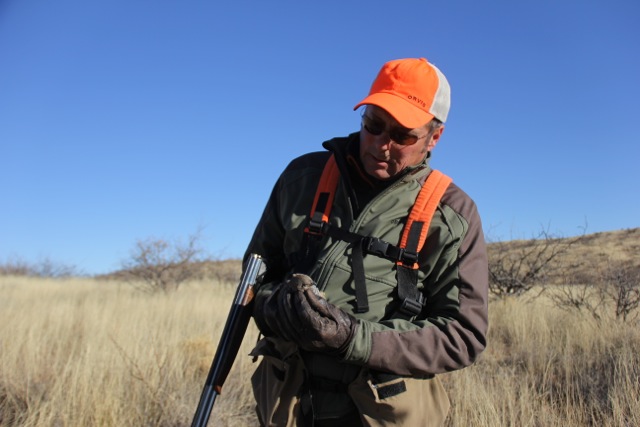 You have to work hard for each bird, so take some time to admire it.
Photo by Dave Brown

Wingshooters need to be in decent shape and come prepared with a good set of boots, a strap vest (in order to properly layer), and a 12- or 20-gauge gun choked IC/mod. Shot size is very important , since these are tough birds and if not cleanly killed will hit the ground running, resulting in a lost birds. Therefore, I like to shoot a #7 followed by a #6, a combination that seems to work great. 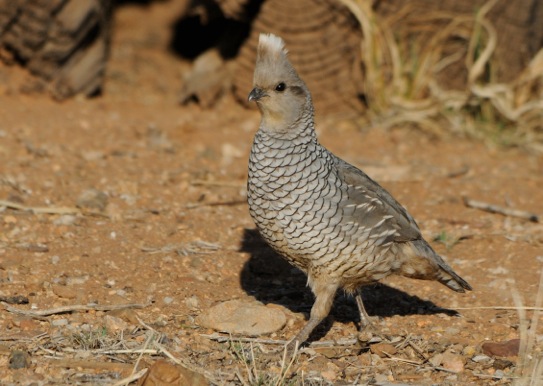 The scaled or blue quail makes for hard but rewarding hunting.
Photo by Randy Babb

In southeastern Arizona, scaled quail hunting takes place in a land that is incredibly rugged, scenic, and historic. Mountain Ranges that where once home to Apache chiefs Geronimo and Cochise are the backdrop, the Arizona sunsets are amazing, and the flora and fauna are pretty impressive. The Borderlands are a great place to get out of the cold and pursue one of the sportiest game birds in The United States. 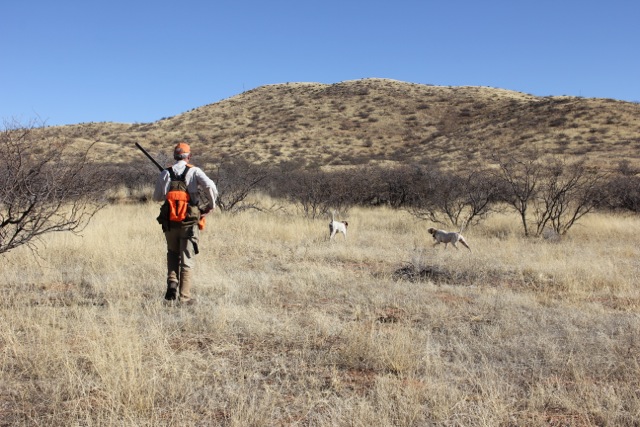 Two English pointers are locked up on a covey.
Photo by Dave Brown 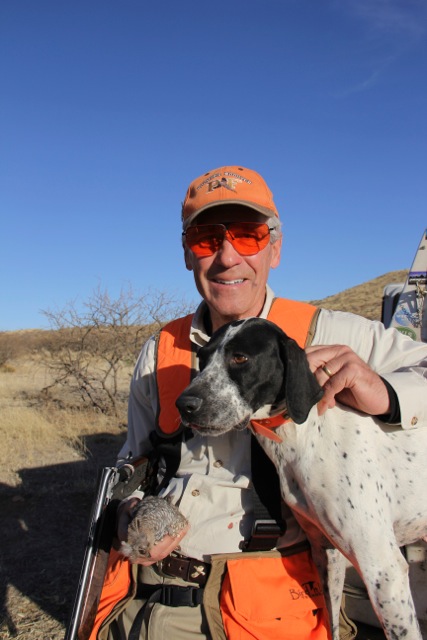 2 thoughts on “Photo Essay: The Rewards of Hunting for Borderland Blues”