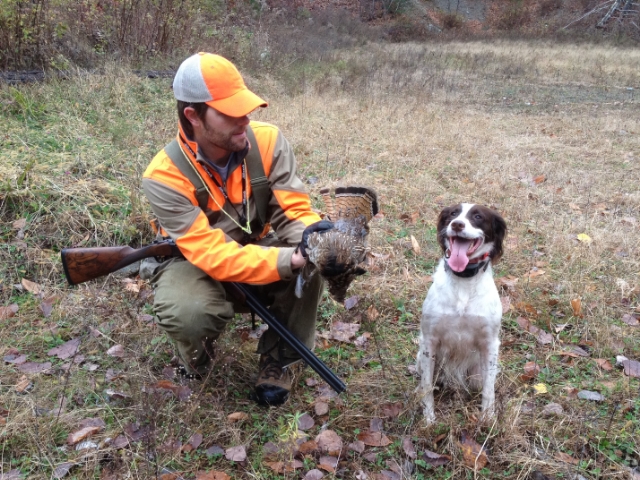 Success in the grouse woods requires a combination of practice and instinct.
Photo by Phil Monahan

Here in our neck of the woods, upland hunting opens earlier than in most areas of the state, with grouse season kicking off on the 20th of September. Although I do hunt these early-season days, I like to think of them as the preseason. Sure, I could have dusted clays at the range all summer, undoing bad habits while trying to set some good ones, but I didn’t. And if we’re willing to be honest, I’ll bet you didn’t either. With that in mind, I’d like to offer a few mantras I like to keep in the front of my mind during the preseason.

1. Swing, batter, swing: Some years back, I was lucky enough to get invited to hunt a private club with a woman who was certain death with a shotgun. After I had missed an easy dozen or so she stopped me: “You’re checking your swing. Don’t.” That’s all it took. With her advice fresh in my mind, the next three cocks that came up went home in my coat.

2. Use the force, Luke: Old Ben Kenobi was right. Trust your instincts. When it comes to snap-shooting grouse and woodcock, it’s best not to think too much—if at all—about the shot. Definitely consider the safety of the situation, especially if hunting with others over dogs, but beyond that, an empty head is a clear head.

3. Keep your eye on the birdie: This is a corollary to the above. If there’s anything in your head when you slap the trigger, it should be the bird and only the bird. I’m sure to miss every time if I even so much as think about my bead or barrels when a bird gets up. My best and most memorable shots are always the ones that replay like movies, starring birds in the lead instead of me.

4. See it first: While we almost always hear a bird before we see it, our eyes, rather than our ears, should give us the green light. The sound of the flush helps me orient my body in the direction of the bird, but I don’t begin to mount and swing until I see my target. If I don’t see anything, I don’t shoot. “Poke and pray” may work for some, but for me, seeing is believing.

5. Set. Reset: Getting more than one shot at a fleeing grouse is a rarity in my experience, but with pheasant—and woodcock, especially—that second barrel can make a real difference. I’ve been hasty with a good many first shots. Instead of rushing the second and final shot, I’ve found it helpful to reset the stage: when possible, the gun comes back to the ready position and is then remounted and fired rather than sending more good shot after bad.

There isn’t anything new here and I’m sure it’s nothing you haven’t heard before. Consider these mantras friendly reminders from a fellow fanatic more than an expert’s how-to.

Matthew Nelson is an associate at the Orvis Outlet in Lake George, New York.