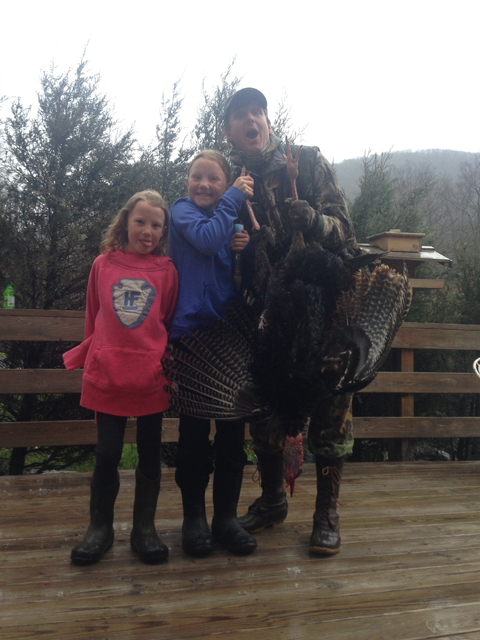 Reid Bryant poses with his young daughters and his first-day trophy gobbler.
Photo by Kim Bryant

Yesterday, we introduced our 2014 Orvis Turkey Pool Contest, in which you get to vote for the hunter you believe will take top prize this year. Well, today was Opening Day, and one hunter, Reid Bryant, scored on his first morning in the woods. Since Reid is new to the area, he expected to struggle a bit, and his quick success even inspired his poetic muse:

Ode To The Early Leader: Don’t Hate the Playa
by Reid Bryant

There once was a guy named Reid,
In the turkey pool he took low seed.
But on opening morning,
He shot out a warning,
For all doubters to know he’d succeed.

It was as if painted in oils,
The result of a wet morning’s toils,
A lone bird on high,
Silhouetted by sky,
Ol’ Reid dumped him in moistening soils.

So now he’s the talk of the town.
And this is how things will go down.
You’ll vote for yours truly,
And win in the pool-y,
Cuz I’m the baddest lil’ shooter aroun’.

Don’t expect to hear Garrison Kiellor reading that on NPR any morning soon.

So here are the current standings. You’ll see that both Steve Hemkens and Jim Lepage, hunting in other states, have already bagged good birds. But the competition is still wide open. So go vote!