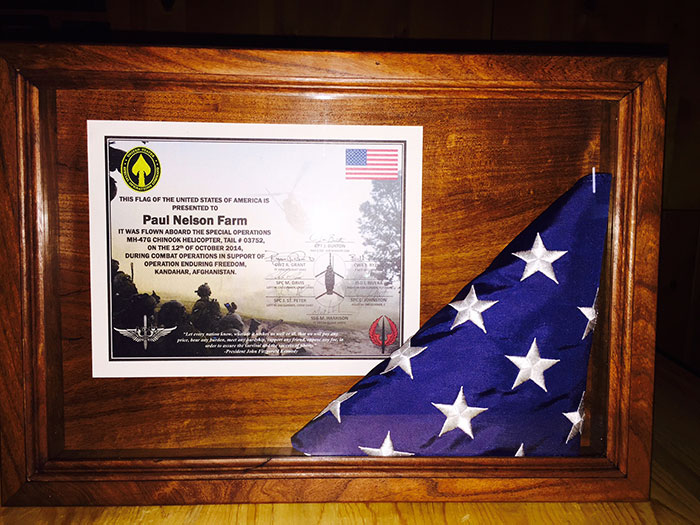 [Editor’s note: The folks at Paul Nelson Farm recently shared with us a very meaningful gift that was presented by a special guest in appreciation for a great hunting adventure.]

This flag was flown on a US Army Chinook helicopter during a Special Operations Command mission. Captain Jason Burton led his crew into a “hot” valley in Helmend Province, Afghanistan to extract 35 troops (NATO soldiers, US Special Forces and Afghan commandos) from advancing Taliban fighters.

The mission was accomplished—in a hostile environment without incident or injuries and only minor damage from enemy fire—on October 12, 2014.

We are so honored to display this flag at Paul Nelson Farm as it was given to us by a proud Army father, whose brave son flew that Chinook helicopter. It is a very meaningful flag to our guest, as his sons provide leadership and courage in our US Army to protect and defend our freedoms and liberties. The beautiful display box was hand crafted in Schulenburg, Texas, using Mesquite wood harvested in the Shiner, Texas area.

We are truly honored to have such fine guests at Paul Nelson Farm, and we appreciate Mr. Burton’s thoughtfulness after an unforgettable hunt. Thank you to all our men and women serving in the military!

One thought on “Photo: A Flag of Honor”