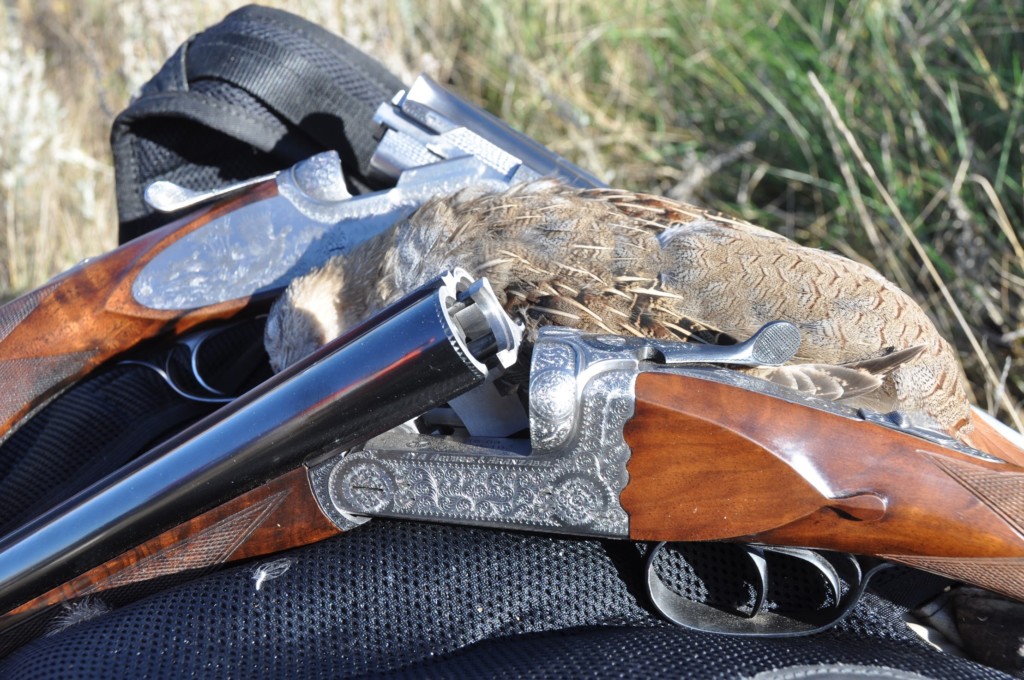 At the turn of the last century, a group of Calgary Sportsman—led by the infamous Judge Winters—were concerned with the decline of sharptail grouse habitat caused by land being cleared for farming.The judge and his cronies decided that a “new” bird was needed for their Southern Alberta stomping grounds.They first tried bobwhite quail, but the small birds were no match for the Alberta winter.

As the story goes, Judge Winters then brought in five pairs of Hungarian or gray partridges (Perdix Perdix) from a game farm in Pennsylvania and released the birds south of Calgary near present day De Winton, Alberta.

The rest is history, as the offspring of that first introduction radiated out across the Northern Plains into Montana, Saskatchewan, southwestern Manitoba, Wyoming, and the Dakotas.Since that initial planting, Huns (as they are referred to by most hunters ) have provided great sport across the West.

Compared to other Western game birds, Hungarian partridges are minimalists, requiring very little in habitat, and they tend to flourish in agricultural areas—especially in wheat fields with cover close by. The cover components required are quite simple: Huns need nesting cover made up of native or “tame” grasses, such as alfalfa or Eurasian crested wheat grass. Woody cover—such as caragana hedges, willows, or sagebrush—provide much needed shelter from cold winter winds. 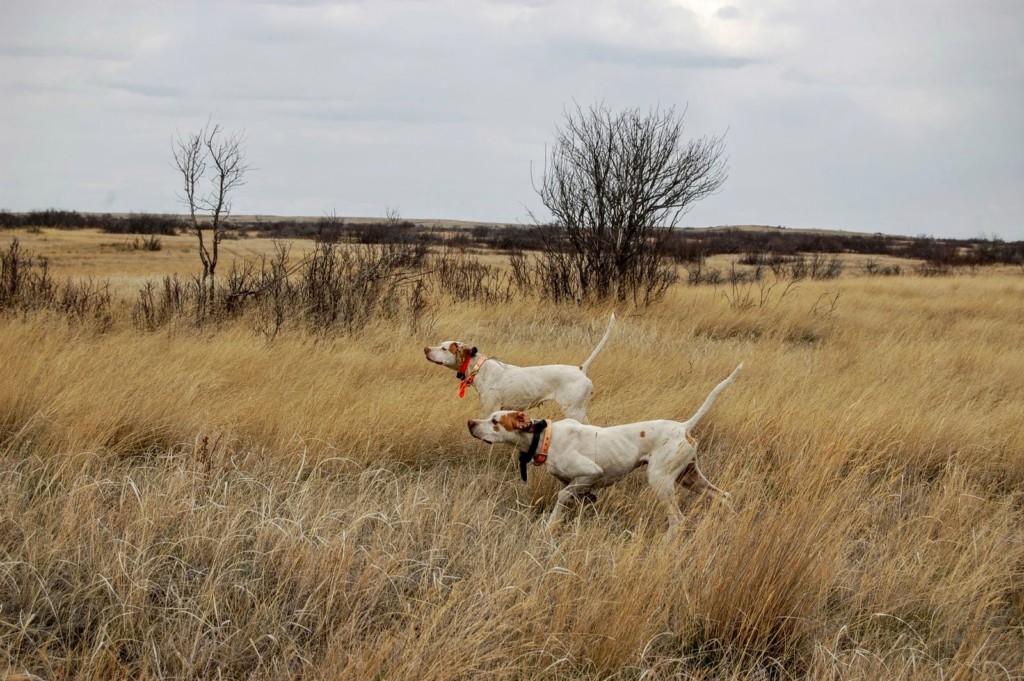 A pair of English Pointers team up on a covey of Huns.

Like most game birds, newly hatched Huns feed on insects, especially grasshoppers, switching to plant seeds as the season progresses. I believe that this is why Hun populations seem to be very stable in areas that grow cereal crops.

Prior to harvest, fields are for the most part a sea of grass. Birds pair up in late March, and nesting takes place in June.Females lay up to twenty eggs, and if the hatch is successful, they do not re-nest. However, if the first hatch is unsuccessful, the female will keep trying, laying fewer and fewer eggs until a new generation is created.

Hun populations fluctuate from year to year, especially if the winter is hard or poor nesting conditions are a concern.Overall, they are hardy minimalists, scratching out a living in places where other game birds cannot.

When I lived in Calgary, my dogs and I where one team of perhaps five that dedicated the bulk of our our hunting time to chasing Huns, as most hunters in the area were after pheasants. The Huns that they harvested where normally incidental.

That trend seems to be the norm, as hardcore Hun hunters are a different breed, settling for points and covey rises, rather than cackling pheasants rising out of cattails. Success is measured in miles walked, instead of who gets to be the “Blocker.” A dedicated Hun hunter runs pointing dogs and generally shoots an over-under or side-by-side gun, making use of a tighter choke for those often long shots. Guns choked IC and Mod get it done and #6 shot is the best all-around load. 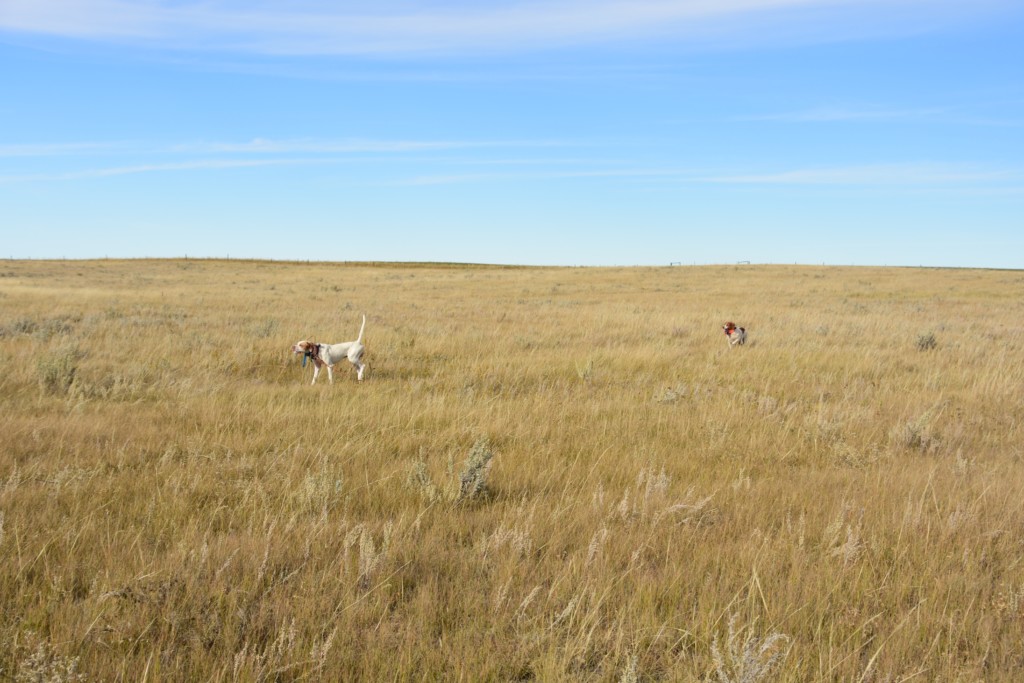 Crush and Squeaky go on point.

The Hungarian partridge is a natural quarry for pointing dogs. A smart “Hun” dog figures it out fast, casting out into the sea of wheat stubble then running the edge of the cover. They learn to point from afar, slamming on the brakes as soon as there is a whiff of scent. If he gets too close, a good dog will lie down and “set.” Huns do not tolerate sloppy dog work. Over the years, I have been fortunate to have some great Hun dogs, who earned a addition to their call name: Wheat Strip “Ted,” “Covey” the Road Hunter, and Cautious “Clint” are examples.

What keeps me and others going back is the sportiness of a bird that is twice the size of a quail yet flies almost twice as fast. There are no “popcorn” covey rises, just a bunch of birds blasting out and calling all at once.

For those that want to go chase this wily game bird on the Great Plains, the go-to destinations are Alberta, Montana, Saskatchewan, and Wyoming. In most places, it’s easy to pull-off a multi-species trip, featuring other upland birds or waterfowl. Now that the Hungarian partridge numbers are on the rise across their Northern Plains range, you won’t likely be disappointed. 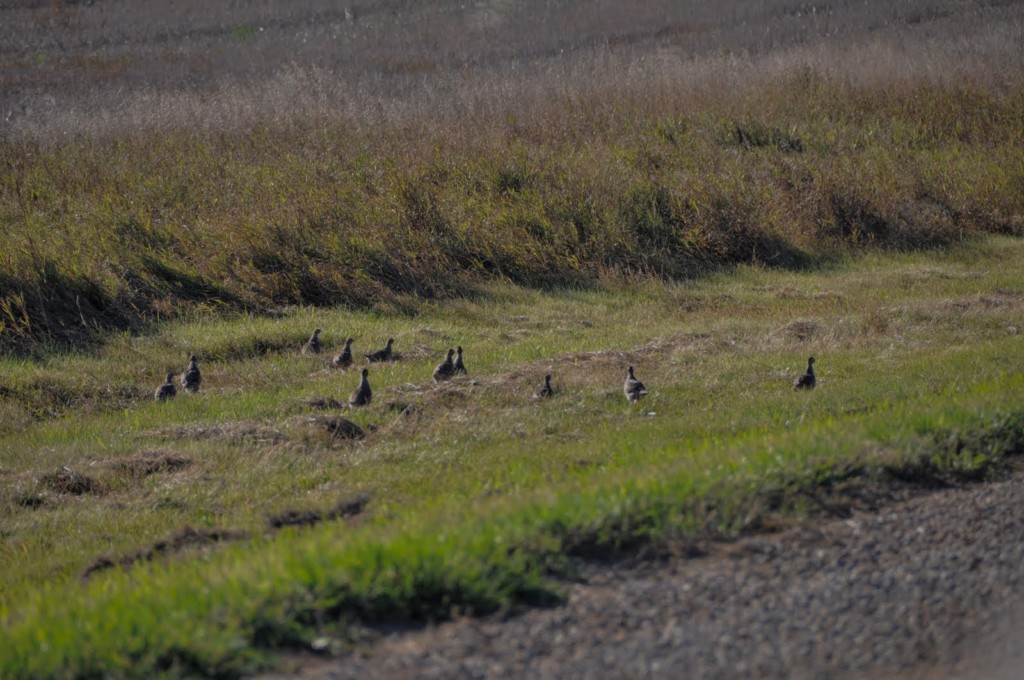 A covery hangs out on the edge of cover. 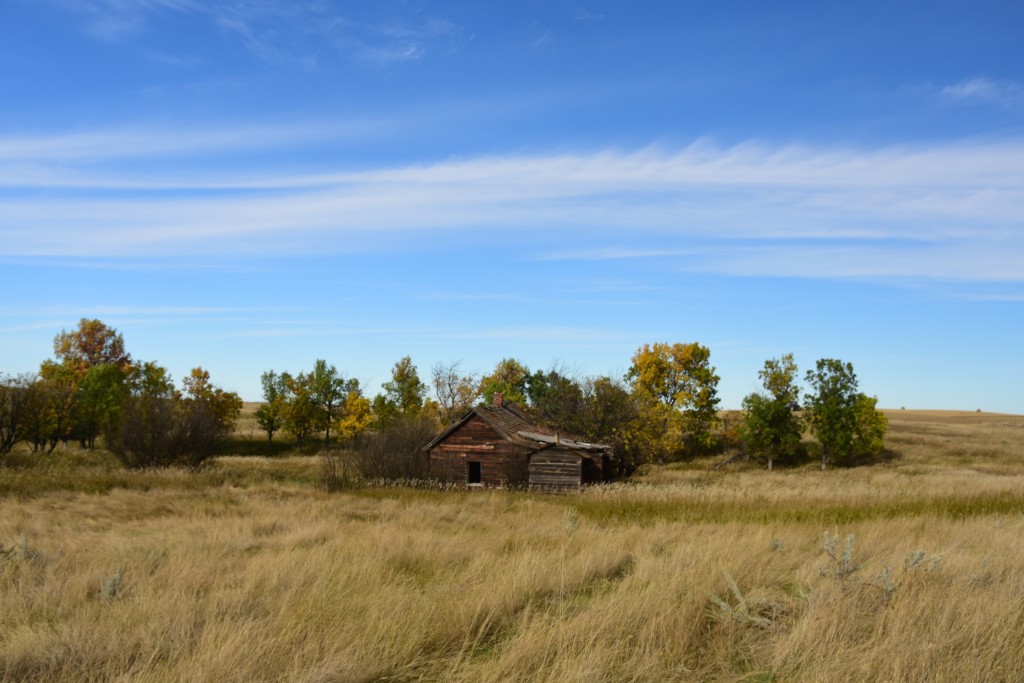 Old farmsteads surrounded by wheat fields will support up to four coveys in a good year. 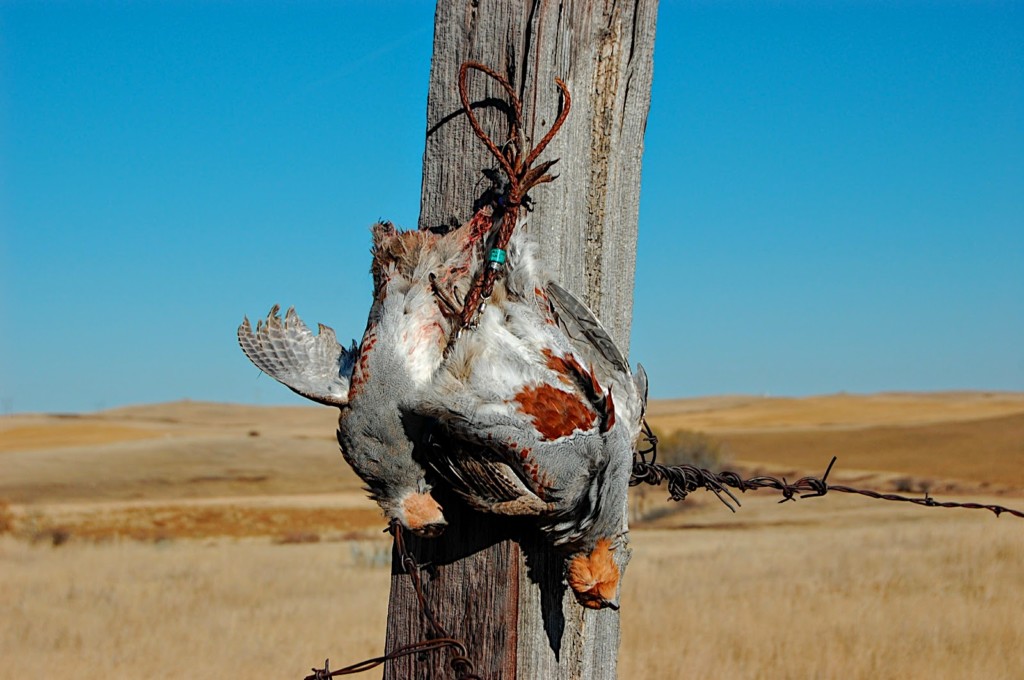 This brace represents a lot of boot leather. 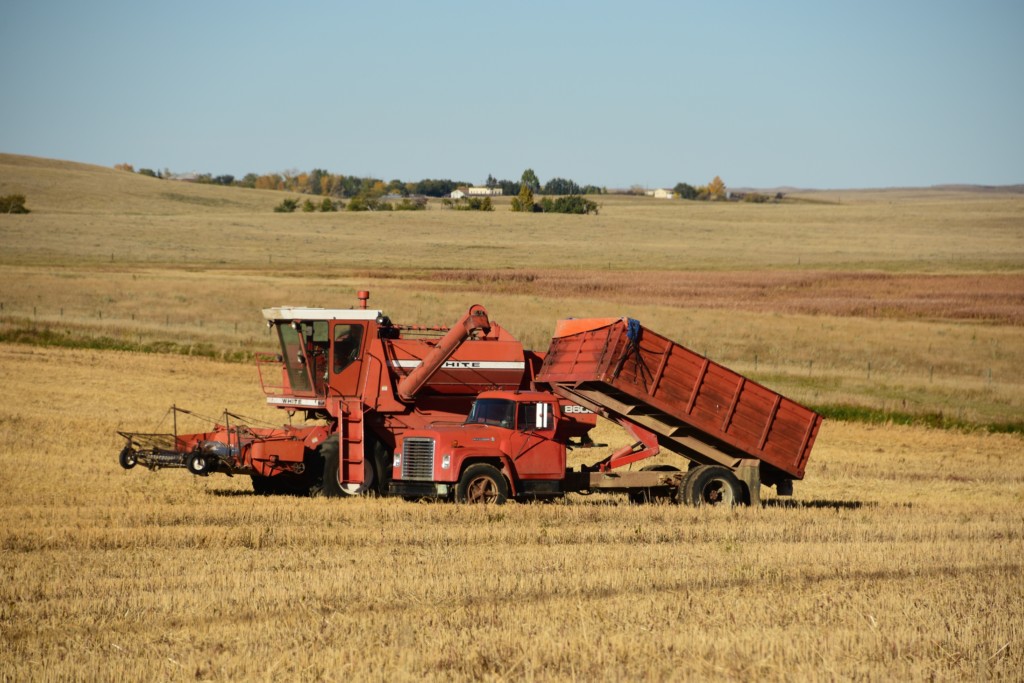 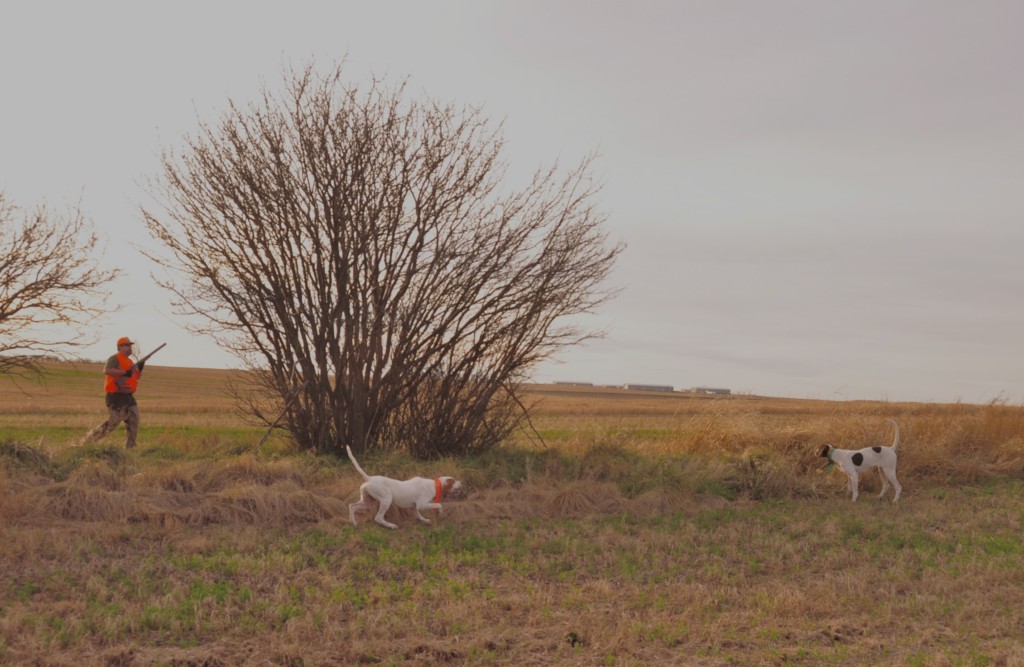 These birds are busted. 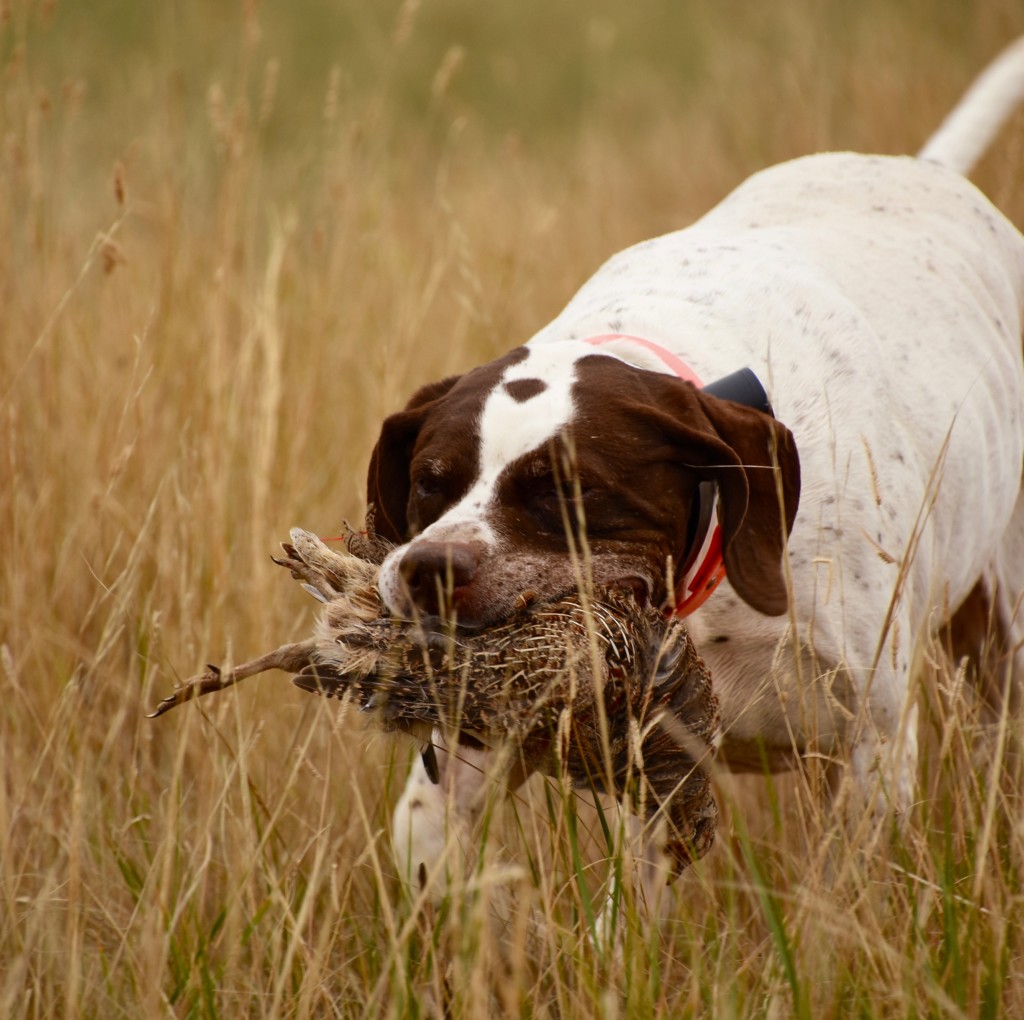 Martha retrieves after a successful shot. 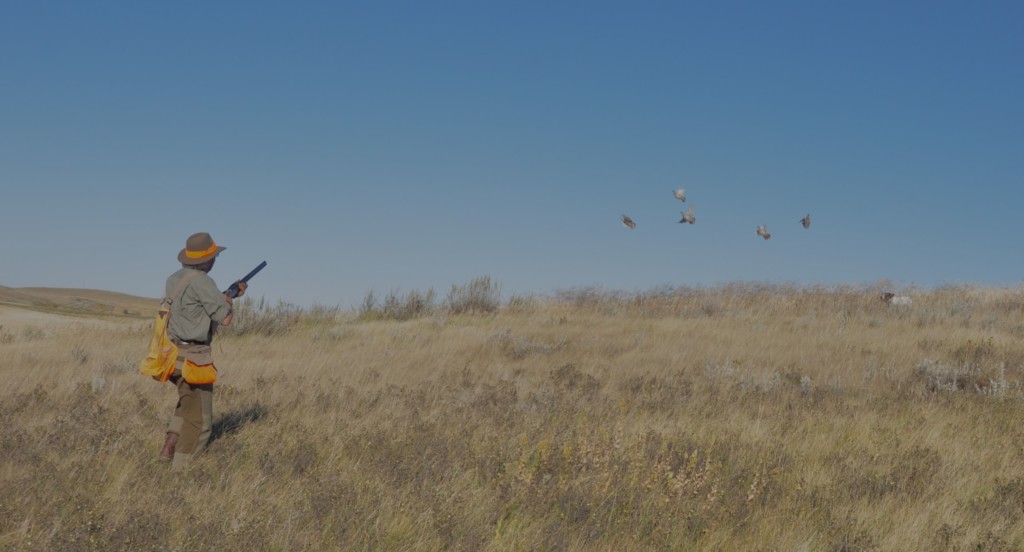 Covey rises are fast and loud. 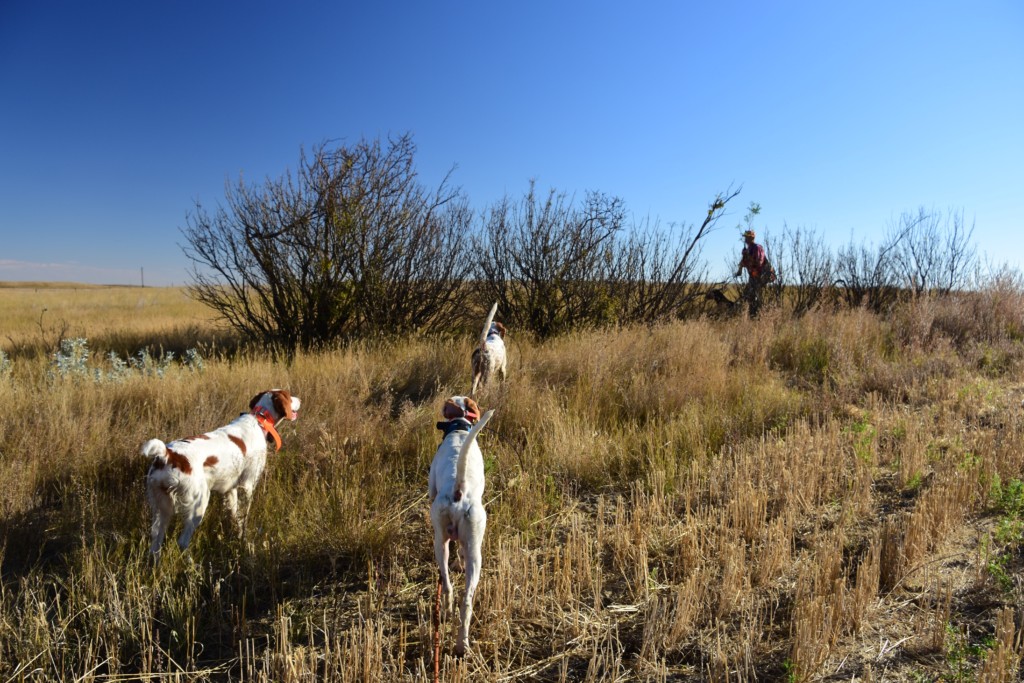 Some of my “young guns” learning the rops. 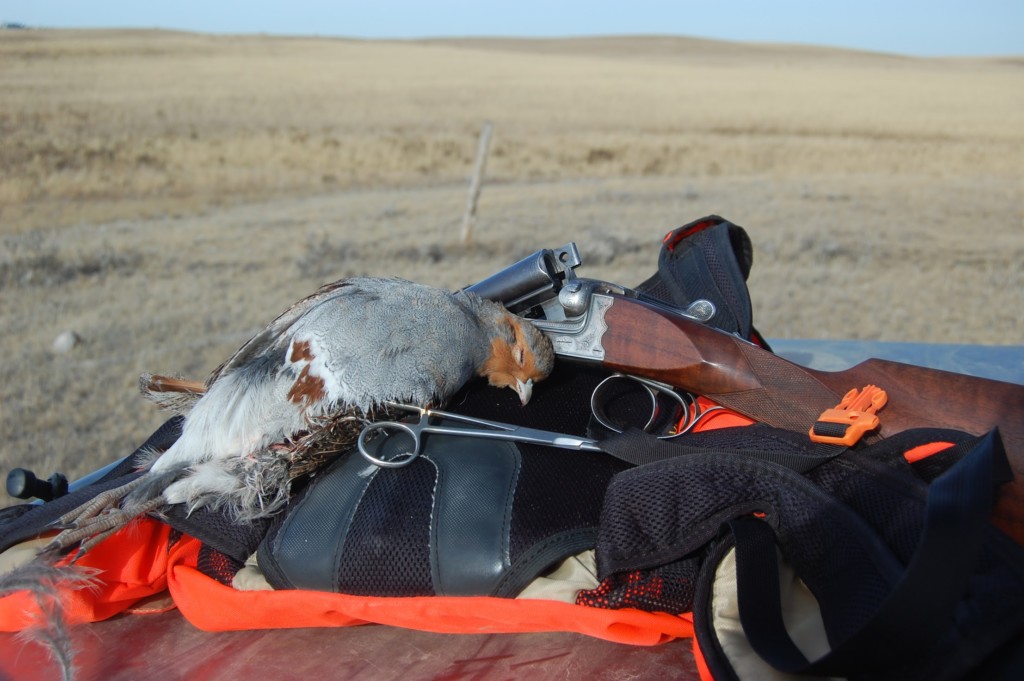 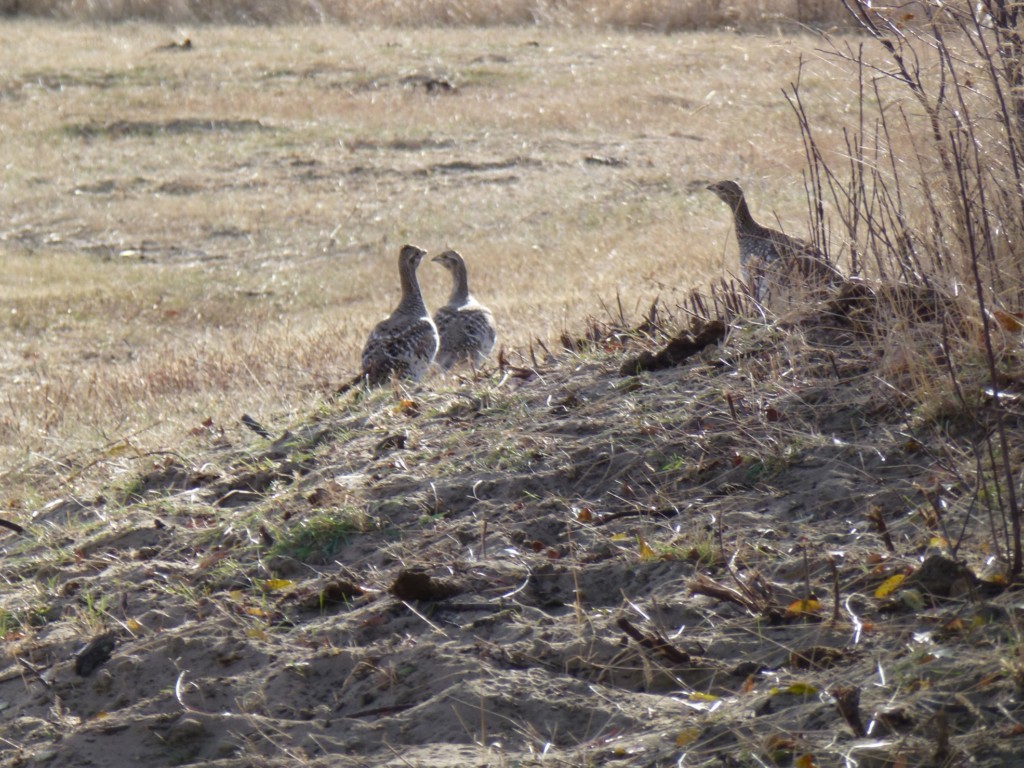 Sharptail grouse are often found in the same area as Huns. 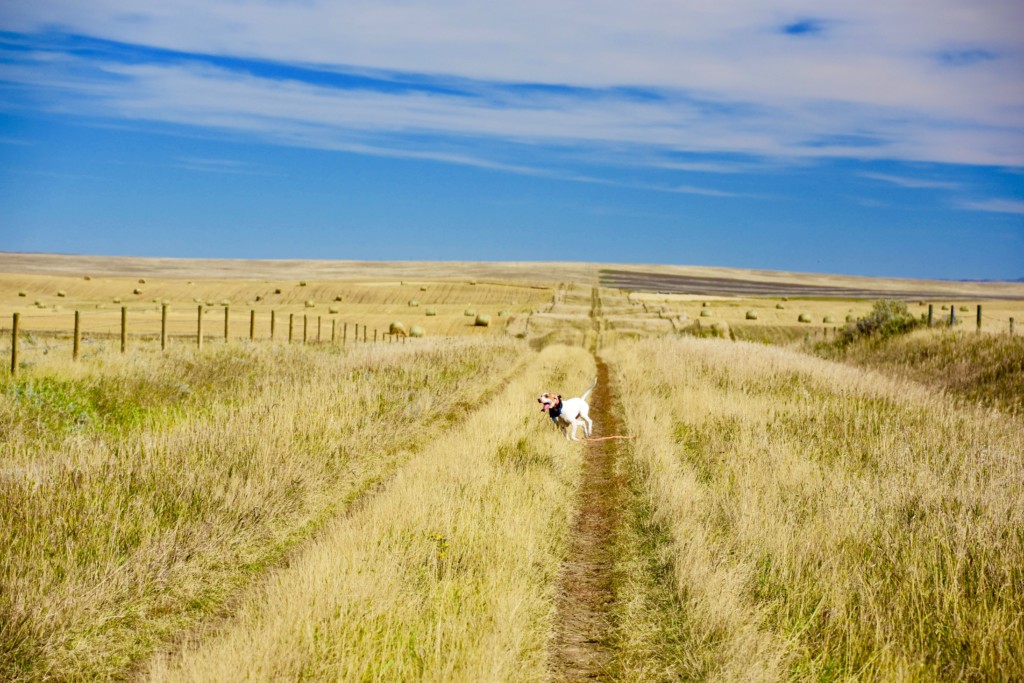 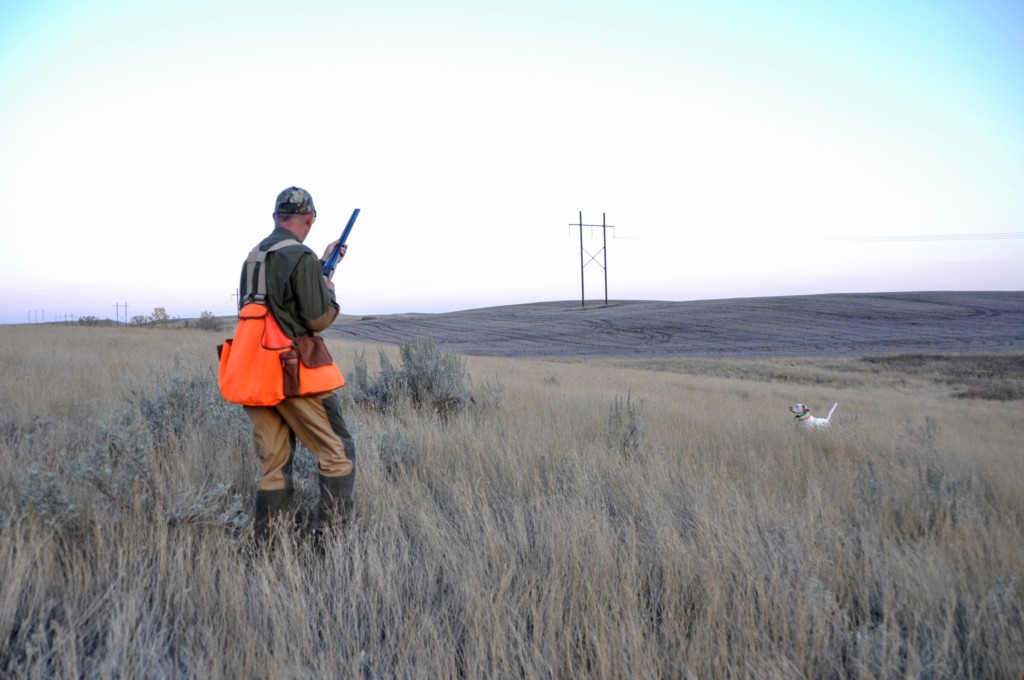 When the chips were down, running Legendary Wheat Strip “Ted” would always produce results. 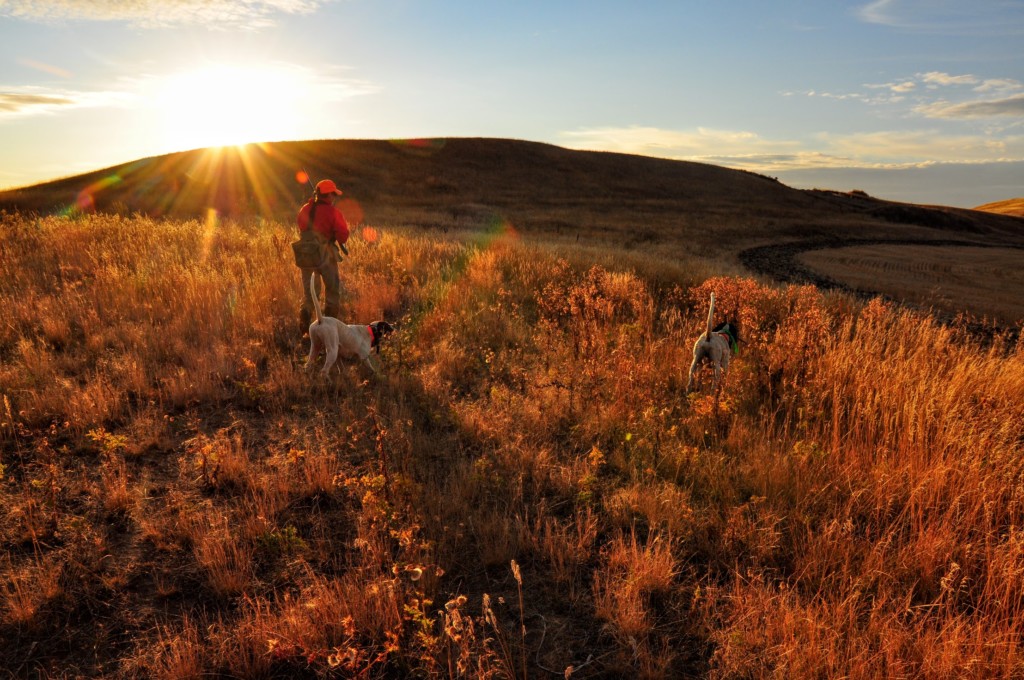 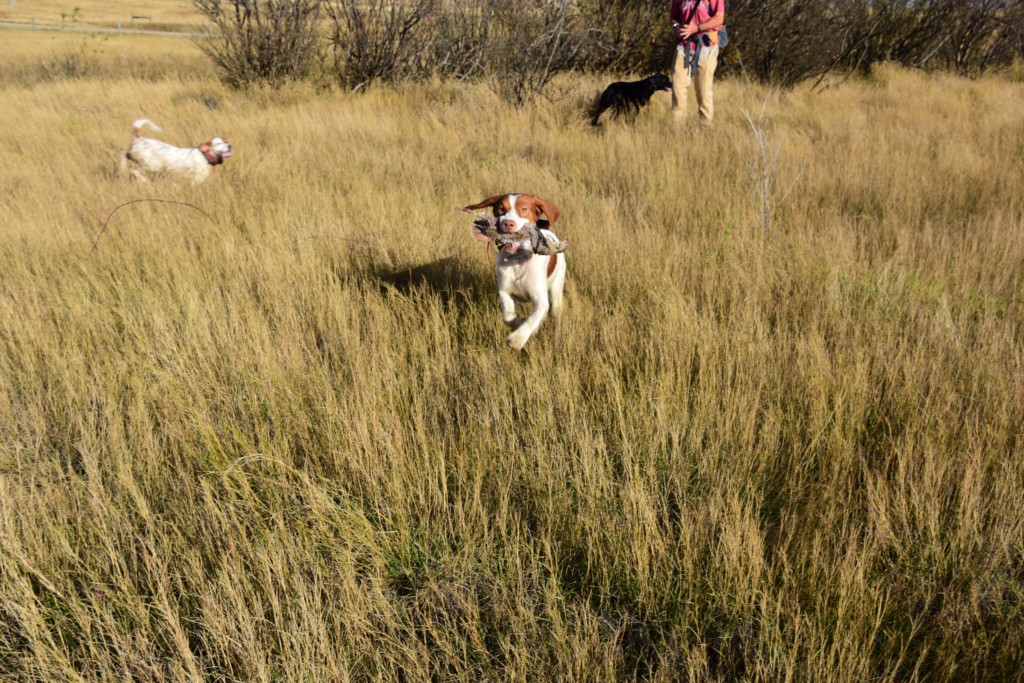 The moment of truth.