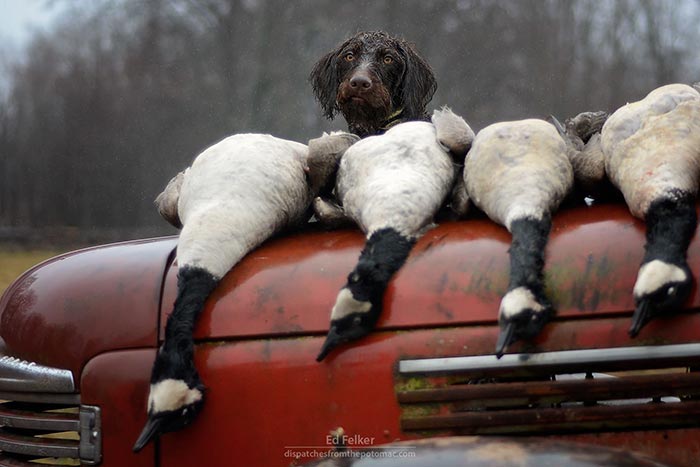 Photos by Ed Felker, Dispatches from the Potomac

I first saw Matt in line at my local 7-11 before dawn on a weekday. I was on my way to work, and he was dressed in full camo. I thought about how different our mornings had been. I know well the difference between excitedly waking up at 4:30 to go hunting or fishing, and doing so to get ahead of rush hour on a work day. So I left the store with confused emotions—happy for this camouflaged stranger, and a little sad for myself—and walked out to my truck.

There was no mistaking his truck parked next to mine: A smattering of waterfowl hunting decals, personalized plates spelling out a variation of Drathaar, and a beautiful young bearded pup watching me from the back seat. 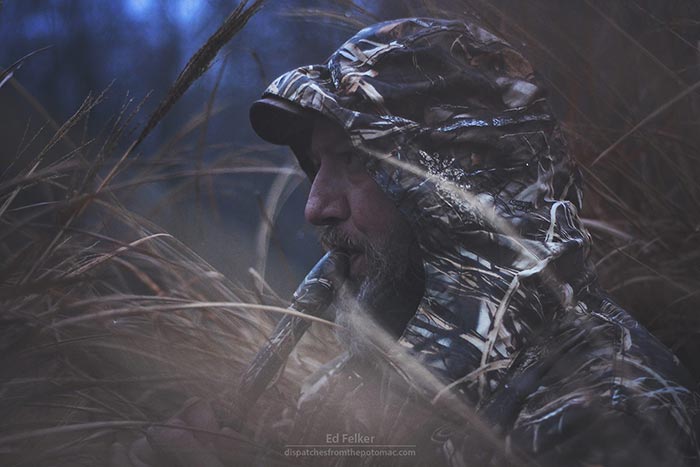 I’ve got a thing for dogs with beards. (I have two Wirehaired Vizslas and a Wirehaired Miniature Dachshund pup). So I greeted him as he came out of the store, and he introduced himself and his enthusiastic pup, Dixie. We chatted about dogs for a while, said “Let’s get in touch,” and then actually did. Weird place to strike up a friendship, but surely not unprecedented.

The other day, Matt asked me to join him and some friends goose hunting. I had never done any sort of waterfowl hunting but always loved the idea of it, so I jumped at the chance to give it a try, to meet some new friends and take some photos.

Apparently goose hunting starts very early in the morning. I slept on the couch so I could set two alarms without waking up my wife. I got up in the middle of the night to let the dogs out in the pouring rain, and while I wondered how much more sleep I had left, my alarm went off. A group text I had been added to soon showed nameless phone numbers chiming in about how awesome conditions were. I think these waterfowl hunters might be a little screwy. 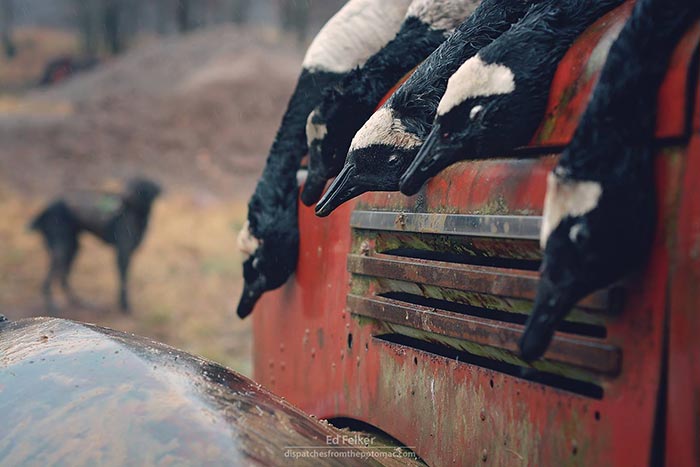 My friend Shawn and his dog, Preacher, were part of the hunt, and along the way to the farm field, we met up with the other numbers from the group text: Colt, Mike, and Brian. I loved that every one of these guys was just a rabid waterfowler. I think that’s the only type of waterfowl hunter there is, actually. They all had duck-themed license plates and hunting decals on their trucks and full waterproof gear. And every one of them welcomed me and understood I had no idea what I was doing.

But the first phase of goose hunting requires no real experience. You gather dozens of life-size, plastic goose decoys—designed first and foremost to be awkward to carry, and only as a secondary consideration to look like a goose—and haul them across muddy fields to be placed in a natural looking, inviting spread designed to lure incoming geese to an area directly in front of the blind, which is also very awkward to carry and set up. Our party of six was split into two groups—one in a field, one on the edge of a pond—and each group had one of the dogs.

Step Two is to sit in a cold drizzle in the blind, eat ham biscuits, drink coffee, and tell stories until it gets light enough to see. This, it turns out, is a most enjoyable step. 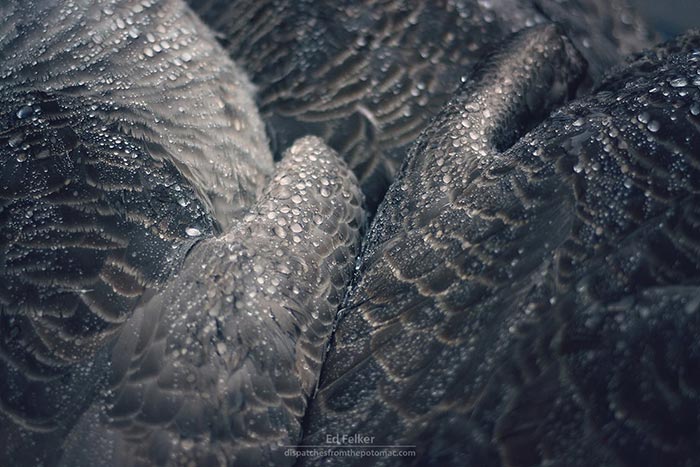 Then, if you’re lucky, geese start to move around. We watched a few groups go by, but they were too high to target. Finally, one small group circled many times looking for a spot to land. Shawn tried to call them in, but the geese settled for the pond instead, and a barrage of shots from our other group told us the rest.

Halfway through the morning, we switched blinds and hunted the pond. Of course, as soon as we did, two more geese came in right to our other group, which was now in the field blind. But hey, I know that’s the way things go sometimes.

Late morning started slow and then got progressively slower from there, so we called it a day and packed everything up. But not before posing the day’s geese and the dogs on an old truck in the field that I had my eye on all morning. So my only shots came from my camera, but next time I’ll send some steel through the air. Next time. 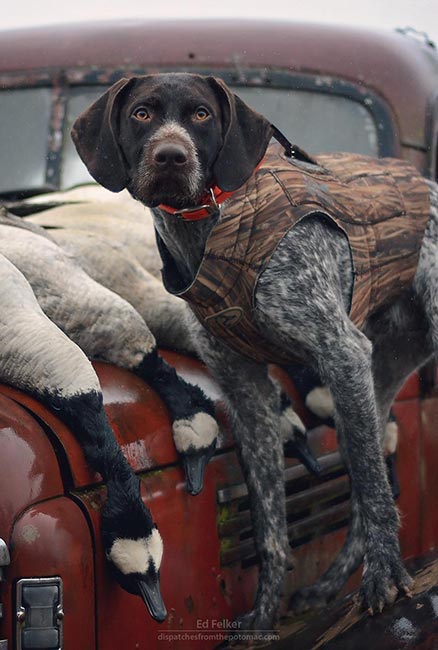 Ed Felker is an artist, graphic designer, writer, and outdoorsman who lives in Virginia. He writes the Dispatches from the Potomac blog, which is worth checking out, if you like the outdoors, dogs, and fly fishing.