Recently, I have heard a few shooters, on the front deck, chattering about different shootings styles and techniques. One conversation struck me as particularly odd. A gentleman mentioned to his friend that recently he had made a big breakthrough with his shooting. His friend inquired as to what the epiphany might have been. The gentleman responded, “I am focusing on the target now when I shoot.” I found the comment puzzling. I have seen this man shoot before and he is a reasonably good shot. What has he been looking at for all these years? The gun.

Looking at the gun is actually a common error most shooters make. They intentionally focus on the bead at the end of the gun rather than the target. The problem then is they are shooting at a blur of a target not a clear image. The game then takes on an appearance that the target is moving a lot faster than it actually is. To slow down the game a shooter’s visual concentration (focus) must remain on the target with laser like intensity.

When instructing, I try to relate shooting a shotgun to other athletic sports. The shooter may have played baseball, tennis, or golf. If trying to hit a 90mph fast ball you are not staring at the end of the bat. When striking a golf ball, which is something I do with great difficulty, you need to keep your head down and look at the golf ball. Hopefully, you are not looking at the club head on your backswing. Tennis is the same. When your opponent serves you the ball, in order to volley it back you need to look at the ball, not stare at the tennis racket. It seems so obvious when you think about all of these sports. Shooting is a simple exercise in your hand-eye coordination and your ability to point at a moving object. In order to do this effectively you must remain focused on the target, more importantly the leading edge of the target. 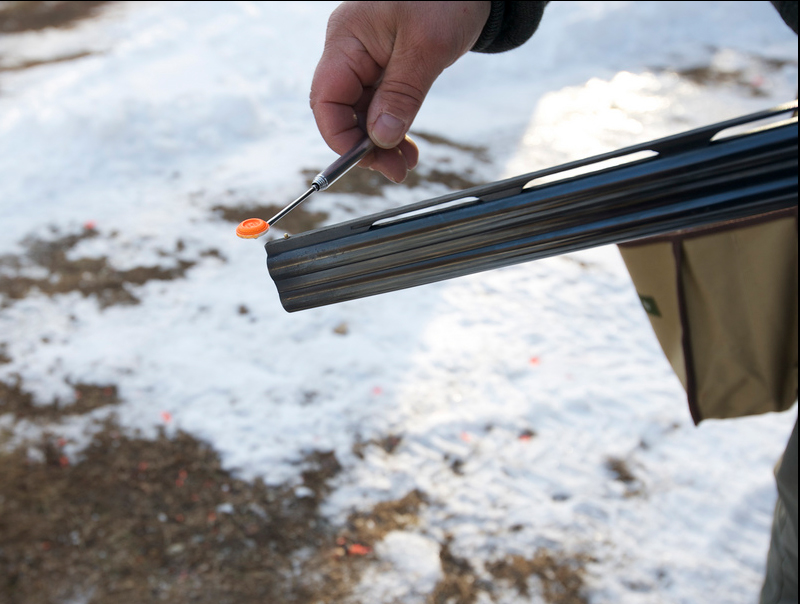 It’s important that you focus on the target and not the end of your gun.
Photo by Sandy Hays

Shooting instructors often have teaching tools or exercises to aid shooters with their focus. Perhaps you could benefit from the friendly, professional insight of an instructor standing beside you for a quick tune up or just getting you on the right line.