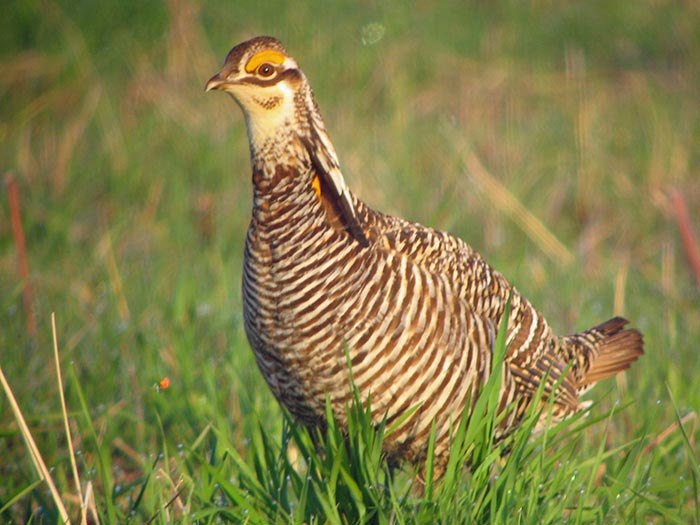 A Male greater prairie chicken always keeps a wary eye on his surroundings.
Photo by GregTheBusker, via Wikimedia CC BY 2.0

To most wingshooters, the allure of hunting prairie grouse includes breathtaking landscapes and wide, open spaces. Once numbering in the millions across several states, prairie chickens have seen both their range and their population diminish drastically. However, the King of the Prairie still commands the spirit of the American West like no other. A prairie chicken taken on the wing is nothing short of an upland trophy.

Prairie chickens are now found only in isolated pockets spread throughout a handful of states, the Sunflower State being one of them. The Flint Hills is considered the traditional stronghold for prairie chickens in Kansas, where the season split into two parts. Each provides the upland bird hunter a chance to experience prairie-chicken hunting differently. The early portion of the season runs from mid-September to mid-October.

During the early part of the season, the birds are not flocked up, but rather scattered throughout the open prairie. Prairie-chicken habitat consists of open, flat country made up of native grasses, combined with rolling grasslands. The most common tactic used to locate early-season chickens is to hunt behind big, ranging pointing dogs as they sweep across the land. Often, there is far more land than there are chickens. If the odds are in your favor, and you’re lucky to come across some chickens, they will usually be found in small groups or singles. In my experience, early-season chickens tend to hold for pointing dogs, but not always. On more than one occasion, flushes of more than fifty yards are common.

The main strategy I employ for hunting prairie chickens is a four-prong approach. This is not to say other tactics won’t work. But by using one or more of these tips, it may help you harvest that most prized possession of the prairie. 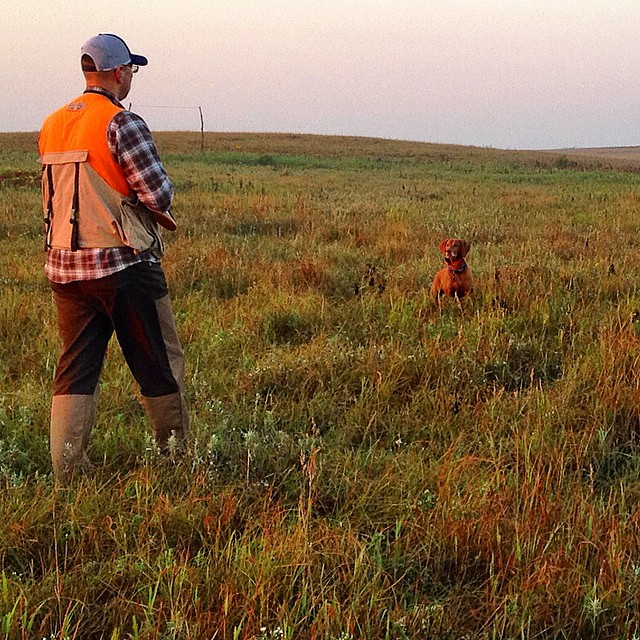 A good dog makes a big difference in your ability to find birds.
Photo by Edgar Castillo

1. Locate
Most hunters accidentally come across prairie chickens while hunting other upland birds. The birds will either flush from their feeding or loafing areas or be observed going to and from such locations.

During this time of the season, chickens feed mostly on insects that are still abundant across the prairie landscape. The birds will also take advantage of crops in nearby agricultural fields. If you can find where they are feeding and ascertain where they will fly off to, then you’ve taken a big step towards completing the puzzle. More than likely though, a hunter will lay down a significant amount of boot leather before coming across prairie chickens. 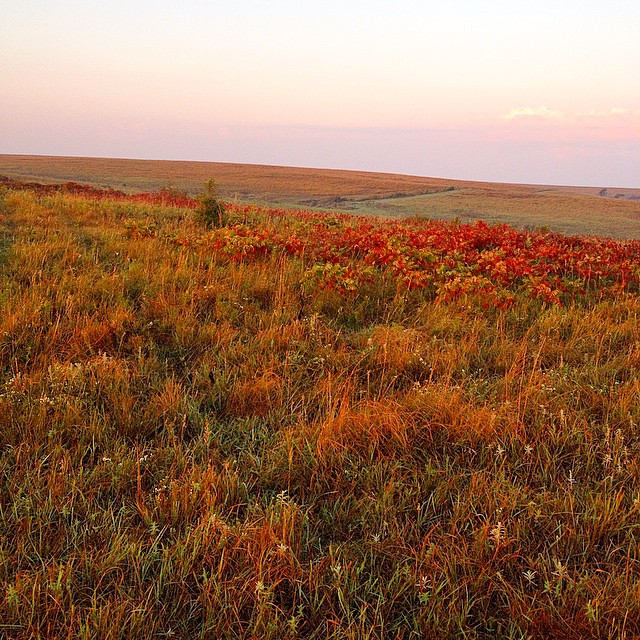 The Flint Hills of Kansas are beautiful prairie-chicken territory.
Photo by Edgar Castillo

After feeding, the birds will look for a place to loaf. Watch for prairie chickens flying, using a strange combination of rapid wing beats followed by a long glide. Use their flight plan to your advantage. This is where the use of binoculars will benefit the upland bird hunter. Glassing for birds is an often overlooked tactic. Normally associated with turkeys and big game, the use of binos is a good way to catch birds coming and going. The prime time to catch birds in the air is in the early to late morning or evening when they are flying to hillsides and thickets looking for cover. Chickens will often set up on high points of open terrain or on the shady side of a hill. High ground with knee-high or shorter grass provides them with security from predators, allowing the chickens to watch to see who is trying to make a meal out of them. You know the saying, “Chicken. It’s what’s for dinner.”

Prairie chickens will frequently inhabit the same general area year after year. Take notice of the location, as they will likely continue to use the spot. Hunting pressure may disperse them temporarily, but they will return if it is an established location. This is where a GPS comes into play and becomes invaluable for future seasons. 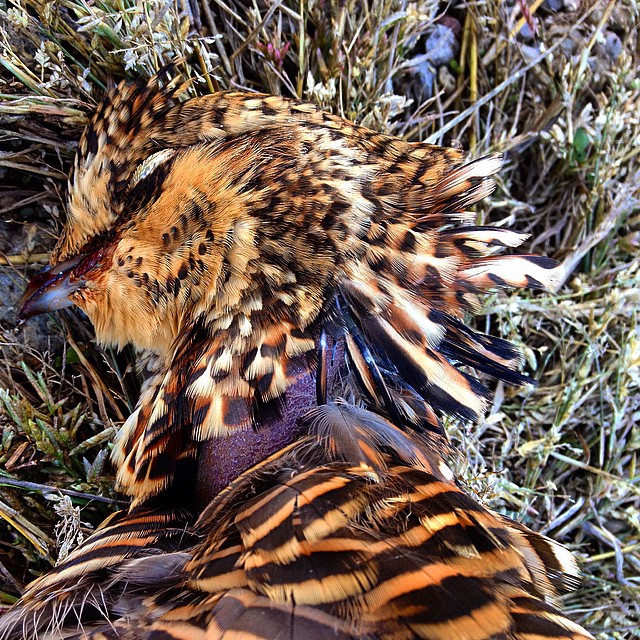 A prairie chicken taken on the wing is a true upland trophy.
Photo by Edgar Castillo

2. Find Relief
Late summer can be quite warm in Kansas, so the focus on finding chickens should be to do what you and I would do when the temperature starts to climb: find a bit of relief in the shade. Shade, whether in the form of hillsides or shrubs of sumac can be your silent hunting ally and partner. When hunting prairie chickens, I tend to concentrate on the shady side of slopes or light cover that can provide relief.

I’ll use my binoculars to watch chickens lead me to prime shady spots. In the area where I hunt, prairie chickens utilize red sumac as a source of food, protection, cover, and shade. 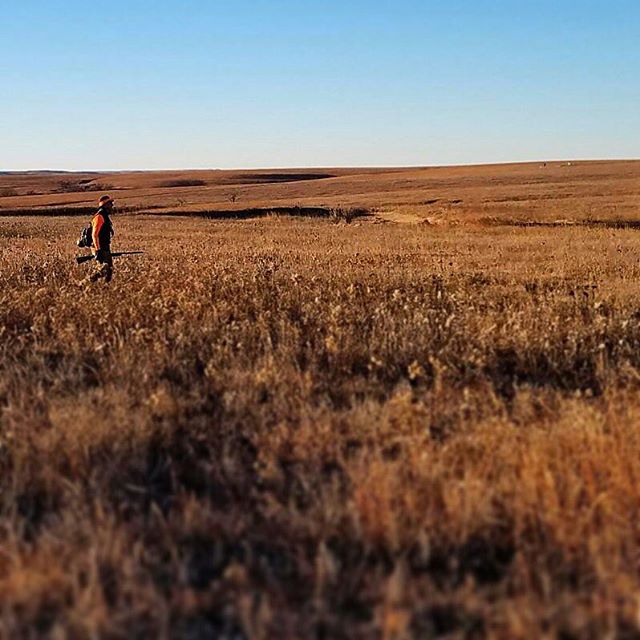 Be ready to expend some boot leather looking for birds.
Photo by Edgar Castillo

3. Sneak In
Once you locate prairie chickens, getting close enough to fire a shot off is a task in and of itself. Look for features in the landscape and use the terrain to your advantage. Keep in mind that you want the wind in your face as well as the dogs’. Using the contours of the land, get as close as possible without being seen. Use the hillside slopes and any dips to mask your approach. Maneuvering from two sides into the area where you know or suspect you’ll find chickens will increase your chances of connecting on a bird.

Send your partner wide and have them approach from the other side of a hill or natural feature, such as a shelterbelt–covering the side or back door. Keep a close eye on the dog because when they go on point, chickens may or may not be close or in the general area. Once, the dog is locked up, walk up as quickly and safe as you can. Be ready to shoot. 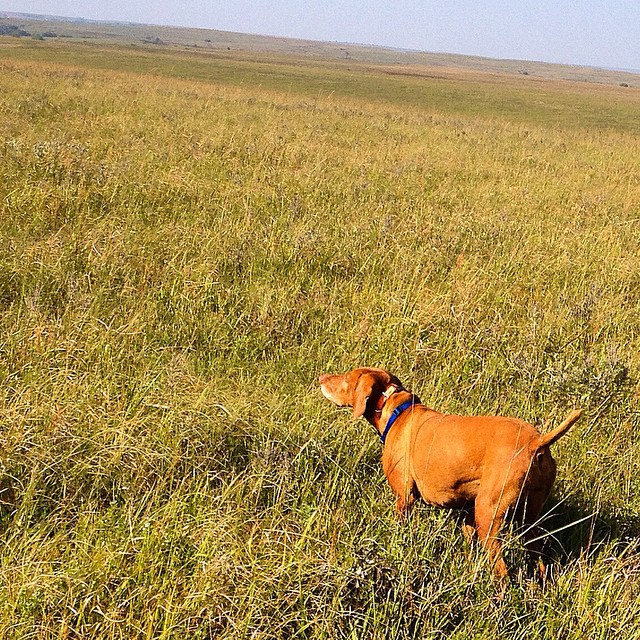 That magical moment of anticipation . . .
Photo by Edgar Castillo

4. Wait for the straggler
Shotgun at the ready. Dog, foaming at the mouth. Birds flush. Shots fired. Now what? Well, if you connected with a rising chicken, then congratulations! The others that erupted from the ground are long gone, flapping their wings in that peculiar of ways that chickens fly, sailing along the wind currents over the horizon. Wait and reload fast after the initial flush of feathers because there’s almost always a straggler or two that will fly just when you think there are no more birds.

Prairie-chicken hunters often assume that all the birds have gone with the initial covey rise, but you should continue watching the dog for signs that they are still birdy. Walk slowly, zigzagging through the area and be ready for a second delayed flush. You’ll end up having a second scare, when you hear the flutter of wings, and another bird or two take to the air. Cluck, cluck, cluck is the sound chickens make when roused as they try to put as much space between them and you. 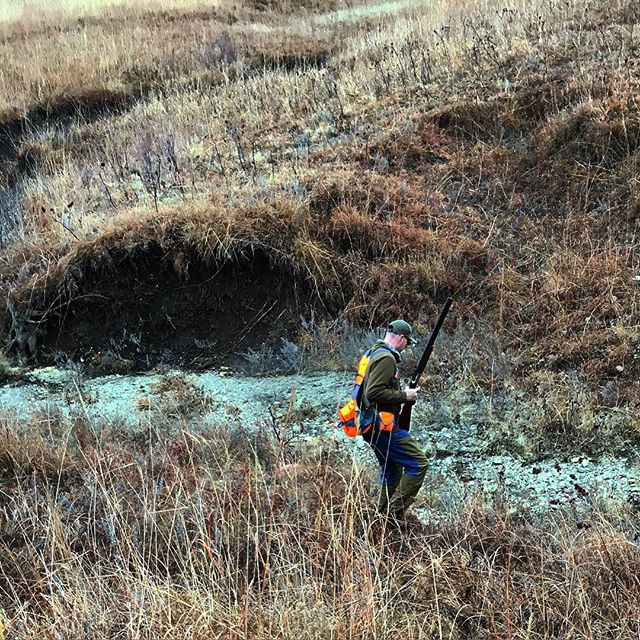 Plan your stealthy approach by using the terrain to your advnatage.
Photo by Edgar Castillo

Early-season chicken hunts call for an improved cylinder or, at the tightest, a modified choke. Birds will tend to hold longer in heavier cover, but those that have the high ground or the ability to see what’s coming for them will flush far. A good pair of boots and an adequate supply of water for both hunter and dog are key ingredients in September.

My first prairie chicken was taken using these tactics, and the scenario played out exactly how I have described it above. Try these techniques, and modify them to work for you depending on where you are hunting and in what type of habitat and environment. What do you have to lose, except maybe a bird or two in your game bag? Along with bragging rights for shooting one of the most wild and majestic of game birds.